No Harden, no problem as shorthanded Rockets rally past Spurs

SAN ANTONIO — Christian Wood had 27 points and 15 rebounds, and the Houston Rockets rallied to beat the San Antonio Spurs 109-105 on Thursday night (Friday, Manila time) in their first game since trading away franchise cornerstone James Harden.

Sterling Brown, who took Harden's spot in the starting lineup, had 23 points, seven rebounds and three assists in 36 minutes.

Houston staged a 15-2 run to lead 105-101 with 1:46 left. Brown had a wild, overhead shot land on the top of the backboard for an out-of-bounds call with 9.5 seconds remaining. Spurs veteran DeMar DeRozan missed a 15-footer with 0.4 seconds left, and San Antonio fouled P.J. Tucker, who made two free throws to seal it. 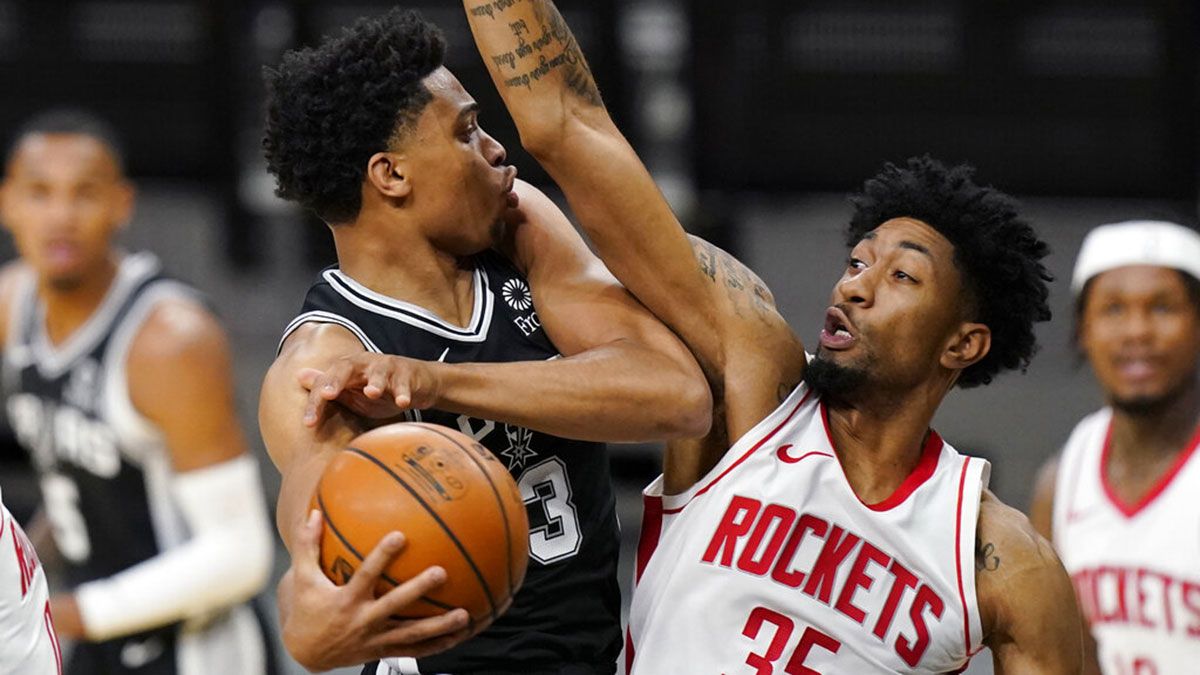 Christian Wood tries to block the shot of Keldon Johnson.

The teams meet again Saturday at the AT&T Center in the finale of a two-game set in San Antonio.

Houston was playing its first game since sending Harden to the Brooklyn Nets in a four-team blockbuster trade on Wednesday. Victor Oladipo, Dante Exum and Rodions Kurucs, who the Rockets acquired along with numerous draft picks and draft swaps for Harden, are not with the team yet.

The Rockets were also without John Wall and Eric Gordon due to injuries. The upheaval led to more minutes for the remaining roster, and they took advantage of it.

It was Houston's first game without Harden since 2012, when Oklahoma City traded its young guard to the Rockets primarily due to salary cap constraints.

The Rockets' first points of the game came on a layup by Jae'Sean Tate. Houston kept a quick tempo in racing to a 14-6 lead, which prompted a timeout by San Antonio coach Gregg Popovich with 7:41 remaining in the opening period. The Rockets extended the lead to 21-11 over the next two minutes with Wood accounting for 10 points.

The Spurs took their first lead at 49-48 on a pull-up jumper by Dejounte Murray with 10:18 remaining in the third quarter.

Rockets: Wall missed the game with a sore left knee. ... Gordon was running and shooting 3-pointers prior to game but was ruled out due to tightness in his lower left leg. ... Wood was held to five points in the second quarter, shooting 2 for 7, after collecting 10 points in the opening quarter.

Spurs: San Antonio is 6-3 with LaMarcus Aldridge in the lineup. The Spurs lost all three games Aldridge sat out with a sore left knee. He had 11 points Thursday. ... Walker has made 25 of 48 3-pointers in 12 games this season after going 41 of 101 to set career highs last season. He is shooting 40% on 3s in his career. ... Johnson has scored at 25 points twice this season, which is the fourth most through first 30 career games in Spurs' history. David Robinson leads the list with 12.
___