Hawks tie series with 76ers as Embiid limps through Game 4

ATLANTA — Trae Young overcame a cold start to score 25 points, including a floater that gave Atlanta the lead with 1:17 remaining, and the Hawks rallied to beat the Philadelphia 76ers, 103-100, on Monday night (Tuesday, Manila time), tying the Eastern Conference semifinal at 2-2.

Philly blew an 18-point lead and may have bigger concerns: Big man Joel Embiid spent time in the locker room in the second quarter and didn't make a field goal in the second half. Embiid has been playing with torn cartilage in his right knee.

Bogdan Bogdanovic scored 22 points for the Hawks, and John Collins had 14 points and 12 rebounds. Young made only 8 of 26 shots but had 18 assists.

Embiid finished with 17 points and 21 rebounds. Tobias Harris scored 20 points for the Sixers, and Seth Curry had 17, missing a potential tying 3-pointer at the buzzer.

The Sixers led 60-42 late in the first half but Atlanta chipped away in the third quarter. Bogdanovic opened the final period with a 3-pointer to give Atlanta its first lead of the half, 83-82.

Philadelphia led 98-94 before Collins' 3-pointer cut the lead to one point. Young's floater with 1:17 remaining gave Atlanta a 99-98 lead, and his two free throws when fouled by Embiid pushed the advantage to three.

The Hawks hung on from there, catching a break when Embiid missed a layup and the Sixers knocked the ball out of bounds with 7.8 seconds remaining.

Young missed his first five shots from the field and had his right shoulder wrapped when he sat on the bench early in the second quarter. The Hawks did not announce an injury.

Young's frustration showed when he complained after being called for a foul on Embiid in the second quarter, leading to a technical foul.

After his shoulder was wrapped, Young made a short floater and then connected on two 3-pointers.

Embiid made a 3 after his time in the locker room. But he finished 4 of 20 from the floor — hardly the production the Sixers need from their star, who shot 51.3% in the regular season.

Hawks coach Nate McMillan tweaked his lineup, moving Kevin Huerter off the bench to replace Solomon Hill at small forward. The position has been in flux since De'Andre Hunter, the team's top perimeter defender, was lost for the remainder of the postseason with a right knee injury.

Ben Simmons was called for a flagrant-one foul after he hit Collins to stop Collins' attempt for a breakaway jam with 3:24 remaining in the third. 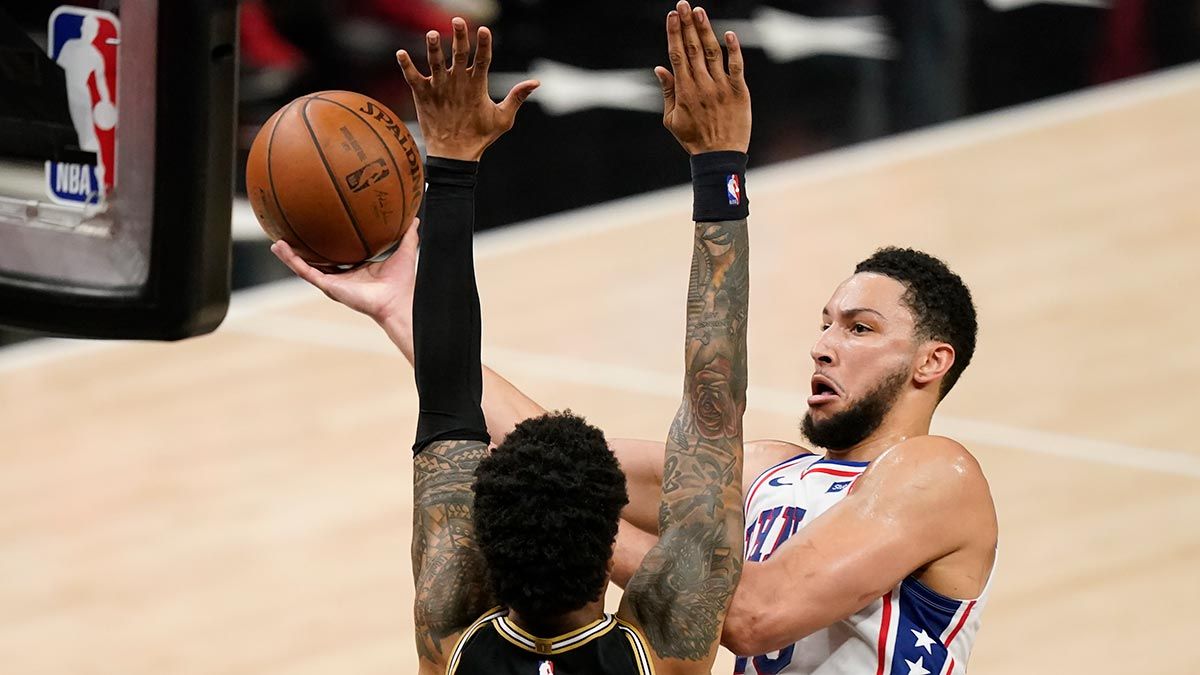 76ers: Embiid's nine first-quarter rebounds are the most for a 76ers player in any quarter of a playoff game since the 1996-97 season. He had 13 points and 10 rebounds at halftime, his third career double-double in the first half of a playoff game. ... Furkan Korkmaz had 10 points after he was coach Doc Rivers' choice to replace starting guard Danny Green, who suffered a strained right calf early in Game 3 and did not return. Green is expected to miss at least two weeks.

Hawks: Hunter is scheduled for surgery on Tuesday in Los Angeles to repair a tear of his lateral meniscus in the knee. ... Clint Capela had 12 points and 13 rebounds.