Trae Young not the only injury concern for Hawks

ATLANTA — The Atlanta Hawks are dealing with another injury that could affect their preparations for Game Five of the Eastern Conference final.

Clint Capela, the Hawks' top rebounder and one of the NBA's best defensive players, took an inadvertent elbow to the face in the closing minutes of a 110-88 victory over the Milwaukee Bucks on Tuesday night (Wednesday, Manila time).

In a postseason filled with significant injures, Capela was struck in the right eye by Bucks guard Sam Merrill on a play under the basket. The Hawks center left the court with a towel over his face and did not return.

After being examined shortly after the game by the team ophthalmologist and checked again after the team arrived in Milwaukee, Capela was listed as questionable for Game Five with eye inflammation.

The Hawks evened the series 2-2 despite missing star guard Trae Young, who injured his right ankle in a freak accident when he stepped on an official's foot along the sideline in Game Three.

With veteran Lou Williams filling in for Young and scoring 21 points, the Hawks romped to a dominating win.

Young was also listed as questionable for Thursday's contest with a bone bruise. Coach Nate McMillan said a decision on whether the point guard can play would likely be made shortly before tipoff, just as it was when he was a late scratch for Game Four.

"He didn't feel comfortable enough to put pressure on his foot," McMillan said. "I'm sure he'll be a game-time decision."

The Bucks also are dealing with a troubling injury to one of their key players. Two-time league MVP Giannis Antetokounmpo was doubtful for Game 5 after going down in the third quarter Tuesday with a hyperextended left knee while trying to contest a dunk by Capela.

Atlanta has dealt with a rash of injuries all season, most recently losing De'Andre Hunter for the rest of the playoffs after he reinjured his right knee in an opening-round victory over the Knicks. Hunter underwent surgery for a torn lateral meniscus and is expected to make a full recovery in time for training camp. 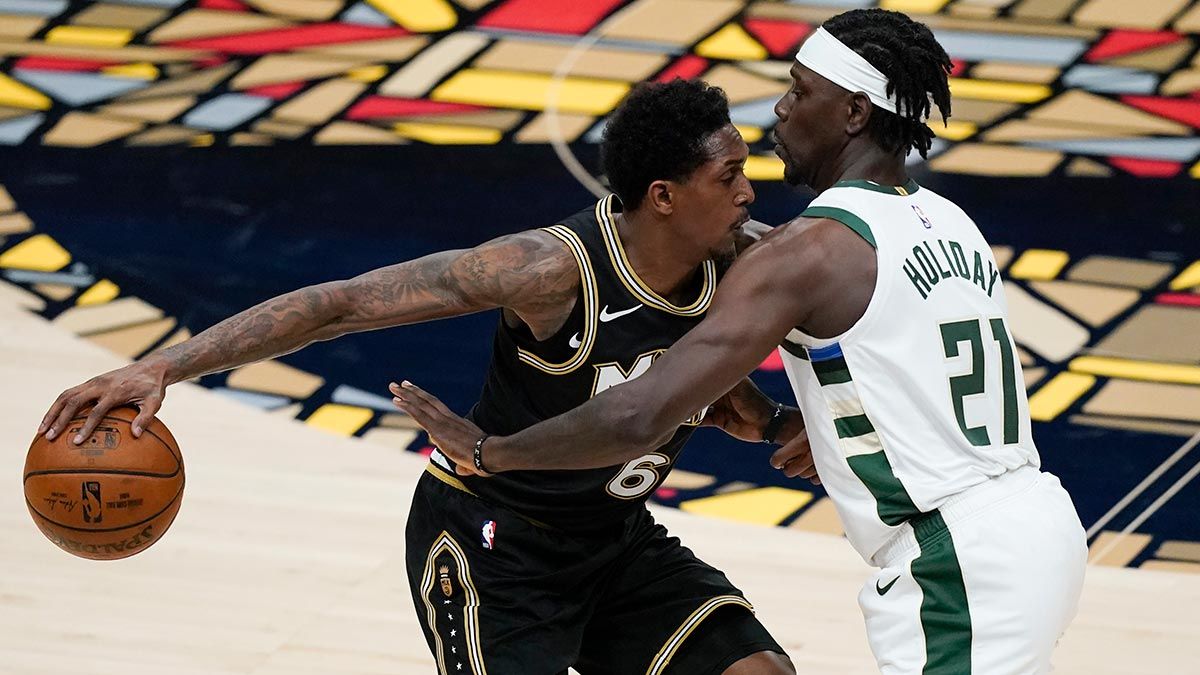 Cam Reddish also missed much of the season with an Achilles injury, but he played a big role in Game Four. In just his second appearance since Feb. 21, the second-year player scored 12 points, grabbed five rebounds and had two steals and a block in over 23 minutes of playing time.

Before Capela was injured, he pulled off an amazing play that sent social media into a frenzy. While falling out of bounds behind the basket, with the shot clock about to expire, he launched one over the backboard with 7-footer Brook Lopez in his face.

"Sometimes there are plays in a game, either you make or your opponent makes, that you know it may be your night," McMillan said with a smile. "I think Larry Bird shot a shot liek that, but it wasn't as deep as Clint's. Clint was out of bounds and fading away. You just felt like it was gonna be our night when that ball went through."