Hawks counting on John Collins to deliver vs big Bucks

ATLANTA — John Collins' value to the Atlanta Hawks' championship hopes — and in free agency — can't be fully measured by his points and rebounds.

To better appreciate the power forward's vital role, try to imagine the Hawks' matchup against Giannis Antetokounmpo and the Milwaukee Bucks in the Eastern Conference finals without Collins' size and athleticism.

Game 1 of the series is Wednesday night in Milwaukee (Thursday, Manila time). The Bucks are favored by seven points by FanDuel Sportsbook.

In a physical conference semifinal series against Philadelphia in which the 76ers seemed to try and bully Collins and the Hawks, he posted double-doubles in the last four games of the conference semifinal series. Collins had 14 points, 16 rebounds, Atlanta's only blocked shot and a steal in the 103-96 series-clinching Game Seven win on Sunday night.

"I'm glad I got to experience something like this," Collins said. "It's a legendary moment for myself personally."

Collins saw the potential for the Hawks to return to the playoffs even before the start of the season after the team added Bogdan Bogdanovic and Danilo Gallinari, among others, in free agency.

"I remember talking with JC in the preseason that we really could make something special with this team," center Clint Capela said. "This is what we're doing now. It's even more amazing that ... we were talking about it and now we're here. I love it."

After the Game Seven win win, Collins wore a T-shirt with an image of him dunking on Joel Embiid in the series.

The 6-foot-9, 235-pound Collins did more than dunk to help the Hawks beat the 76ers in their grueling matchup. He also provided important defensive help for Capela against Embiid.

Collins could be equally valuable in the plan to contain the 6-foot-11 Antetokounmpo, one of the league's most explosive players. Other options for the Hawks include rookie Onyeka Okongwu and Solomon Hill. De'Andre Hunter, who was part of the defensive plan on Antetokounmpo during the regular season, is out for the remainder of the postseason following knee surgery last week.

Antetokounmpo averaged 24.3 points and 11 rebounds as the Bucks won two of three regular-season games against the Hawks.

Collins, who will be a restricted free agent after the season, appears bound for a big payday, either from Atlanta or another team. He could be an attractive target for teams even after seeing his scoring and rebounding averages decline on a deeper Atlanta roster this season. 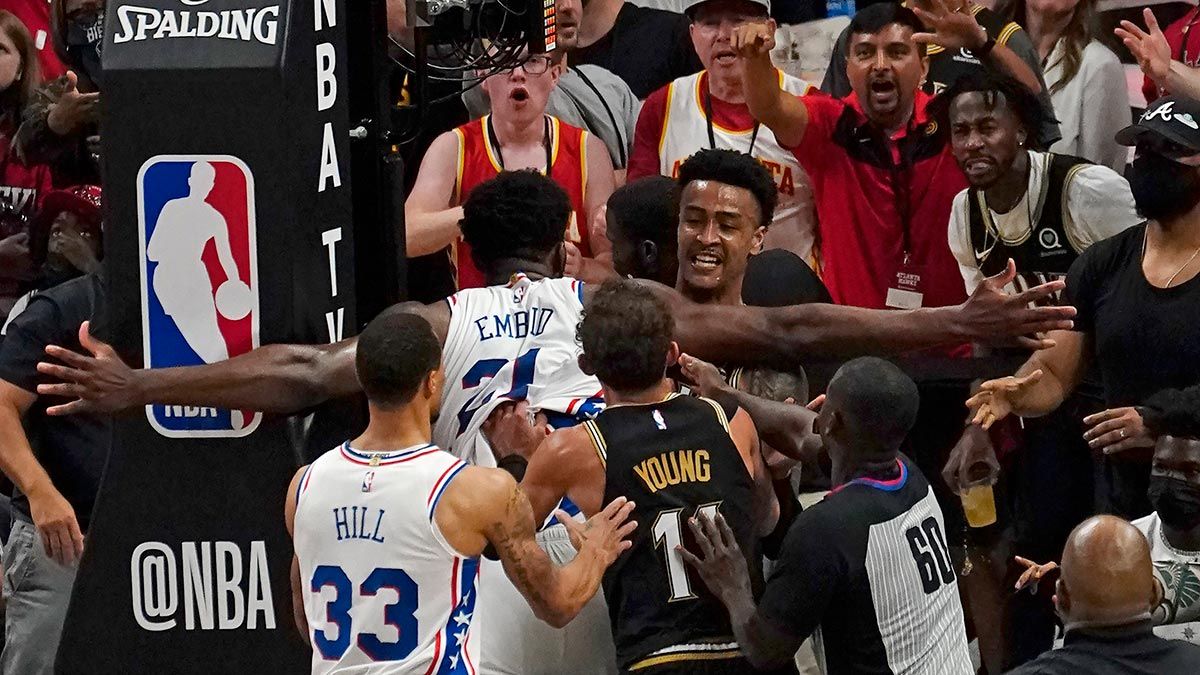 The Hawks will have the ability to match any offers for Collins in free agency. They were unable to reach agreement on a new deal before the season for the No. 19 overall pick in the 2017 NBA draft.

Collins was an important first step in general manager Travis Schlenk's rebuilding plan. Trae Young and Kevin Huerter, who led the Hawks with 27 points on Sunday night, were drafted in the first round in 2018.

This is the first postseason for Collins, Young and Huerter.

"I'm just happy to be here with the brothers that I love and having us get the win and move on to the next round," Collins said. "No complaints. I'm all for it, the environment and the atmosphere."

The Hawks are making their first appearance in the conference finals since 2015, when they were swept by Cleveland. Atlanta has never advanced to the NBA Finals. The Hawks' only championship came in 1958 when the team was based in St. Louis.

With the chance the Hawks could lose Collins in free agency, his name was mentioned in trade talks during the season.

Schlenk said he "never had any serious conversations with any team" about trading Collins this year.

Things could get more serious heading into free agency.