Giannis highlights triple-double with off the backboard dunk

BOSTON — Giannis Antetokounmpo had already picked up his dribble and spent half of a Eurostep when he realized he had nowhere to go with the ball.

Instead of attempting an off-balance shot or passing to a well-guarded teammate, the two-time NBA MVP flicked the ball high off the backboard, then followed it to the rim for a slam dunk.

SEE A ‘gut-check’ victory for Warriors against gritty Grizzlies

"What did I see? I had the ball and I was like, 'Oh, crap. I'm going to get stuck,'" Antetokounmpo said after recording his second career postseason triple-double to lead the Milwaukee Bucks to a 101-89 victory over the Boston Celtics in Game One of their second-round series on Sunday (Monday, Manila time).

"I threw it to the backboard," he said. "I'm lucky enough that God blessed me with the ability to jump. I had a good jump to go get it again and I was able to finish the play."

Antetokounmpo had 24 points, 13 rebounds and 12 assists as the defending NBA champions swiped home-court advantage in the best-of-seven series. (He does not get an assist for passing the ball to himself.)

"That's just pure talent, just pure instinct," Bucks coach Mike Budenholzer said. "He's a great player. He does things that are unique and special and timely. That's one of those plays where you're happy he's on our side."

Jrue Holiday had 25 points and 10 rebounds, and Bobby Portis had 15 points and 11 boards for the Bucks, who are back at the TD Garden for Game Two on Tuesday night.

Jayson Tatum scored 21 and Jaylen Brown had 12 points, but the two Boston stars combined to shoot 10 for 31 in the game. Al Horford added 12 points and 10 rebounds for the Celtics, who fired up 50 3-pointers, making 18, and shot 33% from the floor as a team.

"Offensively, not our best night. I thought we guarded well enough," Celtics coach Ime Udoka said. "To lose a 12-point game when we shot so poorly bodes well for us. In a way it's good to get this dud out of the way, offensively."

After shutting down Kevin Durant and Kyrie Irving in a four-game sweep of the Brooklyn Nets, Boston couldn't stop Antetokounmpo -- even with green-haired Defensive Player of the Year Marcus Smart shaking off a shoulder injury.

Antetokounmpo scored eight straight Milwaukee points at the end of the first half to bring a double-digit lead into the break. Boston was within seven in the final minute of the third quarter before going without a bucket for more than four minutes while the Bucks scored 11 of the next 14 points — including the Greek Freak's freakish alley-oop to himself that gave Milwaukee a 94-78 lead.

"I can't do that. I wouldn't even think about trying," Holiday said. "He's got a great nickname."

Boston won 26 of its last 32 games in the regular season and was the only team to sweep its first-round playoff series. Now Milwaukee has won four in a row, having won the last three in the first round to eliminate the Bulls in five games.

The Celtics led by as many as eight before Milwaukee scored the last 10 points of the first quarter. Antetokounmpo scored the last six of the half to give the Bucks a 56-46 lead at the break.

"This one should hurt a little bit," Horford said. "We have an opportunity now to learn from this game, see how we can be better as a group and come out and do that Tuesday." 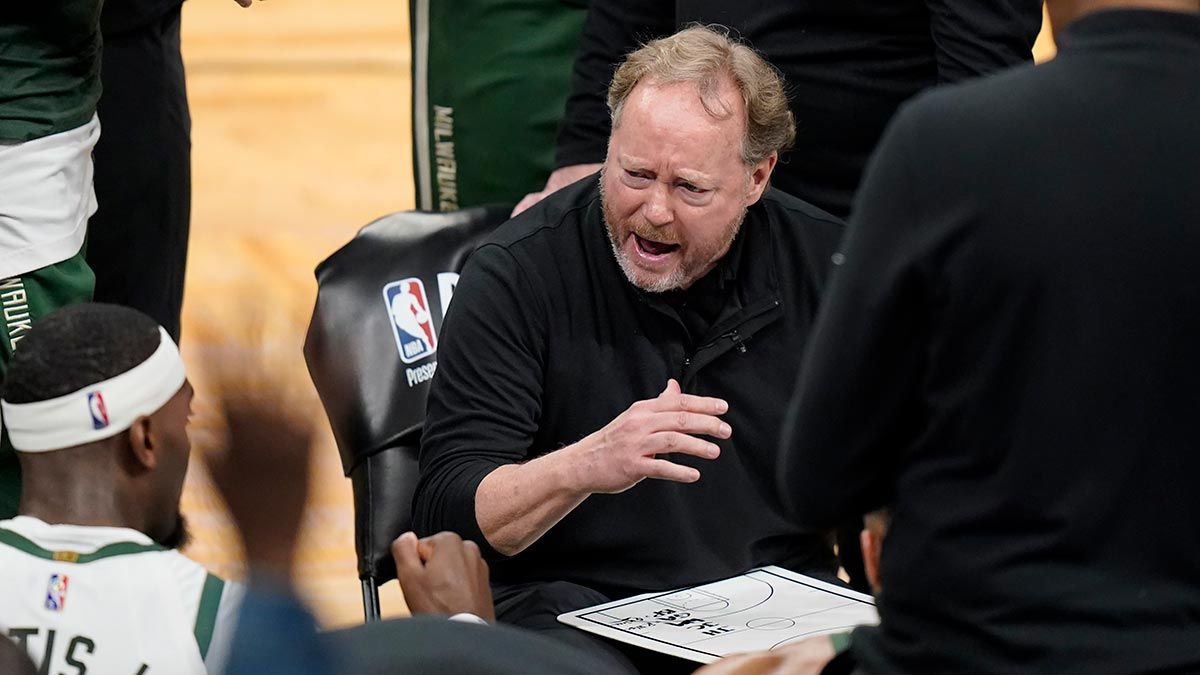 Mike Budenholzer and the Bucks deal the Celtics their first loss this preseason.

Smart scurried off the floor with 1:12 left in the first half, in obvious pain with his right arm dangling limply beside him, after taking a swipe from Jevon Carter in the lane.

The team said during halftime that Smart had a shoulder "stinger" and a right quad bruise. He received a big cheer when he came out of the tunnel for the start of the second half, and finished with 10 points and six assists in 33 minutes.

"He took a few hits," Udoka said. "I think the quad bothered him more than the shoulder. But he's going to play through a lot."

Midway through the third quarter, Robert Williams III went down at midcourt after taking a hit to the groin. He went to the tunnel but returned after the timeout.

The Bucks were without Khris Middleton, who is expected to miss at least two games with a sprained medical collateral ligament in his left knee. George Hill also sat out with an abdominal strain. ... Udoka successfully challenged a third-quarter foul call against Grant Williams when Grayson Allen sprawled to the floor after a 3-point attempt. ... Antetokounmpo shot 1 for 6 in the third quarter.