PHILADELPHIA — Gary Trent Jr. scored 24 points and Enes Kanter had 17 points and 18 rebounds to lead the undermanned Portland Trail Blazers to a 121-105 win over the Philadelphia 76ers on Thursday night (Friday, Manila time).

Carmelo Anthony had 22 points for the Trail Blazers.

Embiid puffed-up his All-Star game credentials in a game that otherwise lacked star power. Sixers guard Ben Simmons sat out with tightness in his left calf. Portland played without Damian Lillard (abdominal strain) and Derrick Jones Jr. (left foot sprain). Throw in four players already out with injuries -- including CJ McCollum (left foot) -- and the Trail Blazers were down to nine players.

Sixers President Daryl Morey replied, "I am not fooled" hours before the game to a tweet that noted all of Portland's injuries. He had reason for concern.

Without Lillard or McCollum, Trent hit two 3s and Portland outscored the 76ers 40-19 in the third. 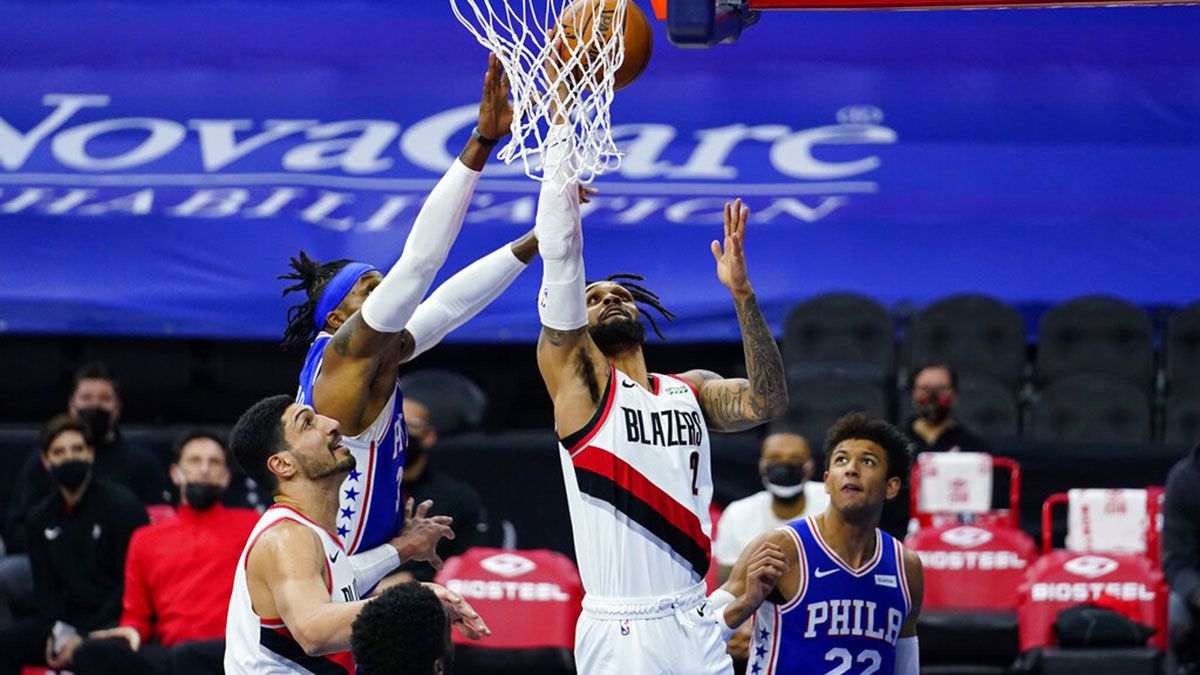 Gary Trent Jr. goes for a layup as Dwight Howard tries to block the shot.

Portland entered 26th in the NBA in team defense, allowing 117.1 points per game. McCollum tweeted, "We might move up to 22nd in the league in Defense after this outstanding performance!"

Embiid scored 31 points in the first half (on 11-of-17 shooting; 9 of 9 from the line) and might have topped 40 had he not left the game for about four minutes when he tweaked his right knee. Embiid gave Philly a scare with an awkward landing when he tried to block a shot in the first quarter. Embiid walked straight to the locker room but returned with 90 seconds left in the quarter.

The 76ers' big man scored 25 points in the second quarter and carried the Sixers as they struggled from outside. The Sixers missed all 10 3-point attempts in the half and that led to a 57-all tie at the break.

76ers: Furkan Korkmaz started for Simmons. Coach Doc Rivers didn't expect Simmons to miss much time. ... Embiid's points tied Andrew Toney's franchise record for most in a single quarter. Tony scored 25 in the fourth quarter March 21, 1982, vs. Boston. ... G Steph Curry did not play in the second half.

Trail Blazers: Play Saturday in New York against the Knicks.