Garland solid in return from injury, power Cavs to OT win over Celtics

Garland added 12 assists, including an alley-oop to Mitchell in OT that put the Cavs up 112-109 in their second victory over the Celtics in less than a week.

See Analysis: Getting free from Nets drama is a win for Steve Nash

Jayson Tatum's basket with 1:04 left pulled Boston within a point, and thanks to some poor possessions by Cleveland, the Celtics had a chance to win it at the buzzer before Jaylen Brown's 18-footer went off the back of the rim.

Brown scored 30 and Tatum 26 for the Celtics, who were looking to avenge an OT loss at home last week to the Cavs, who overcame a 15-point deficit.

Tatum forced this overtime with two sensational plays in the final 6.7 seconds.

First, he drove the lane for an emphatic dunk — and may have been fouled by Jarrett Allen — to tie it 107-all. Then, on Cleveland's final trip of regulation, he blocked Mitchell's step-back 3-pointer as the horn sounded.

Garland had been out since the season opener on Oct. 19, when he was accidentally swiped across the eye by Toronto's Gary Trent Jr. A nasty cut under his eyelid and excessive swelling kept Garland on the bench in sunglasses.

But back doing what he does best, the 22-year-old Garland led the Cavs to another signature win in this young season. Cleveland rallied to beat the defending Eastern Conference champions in overtime on Friday.

Allen added 14 points and 14 rebounds for the Cavs, who had some offensive issues while welcoming Garland back.

Garland didn't show a speck of rust early on, making his first three 3-pointers and scoring 14 points in the first quarter — his career high for the first 12 minutes. He added three assists, two steals and moved around the floor with his usual fluidity. 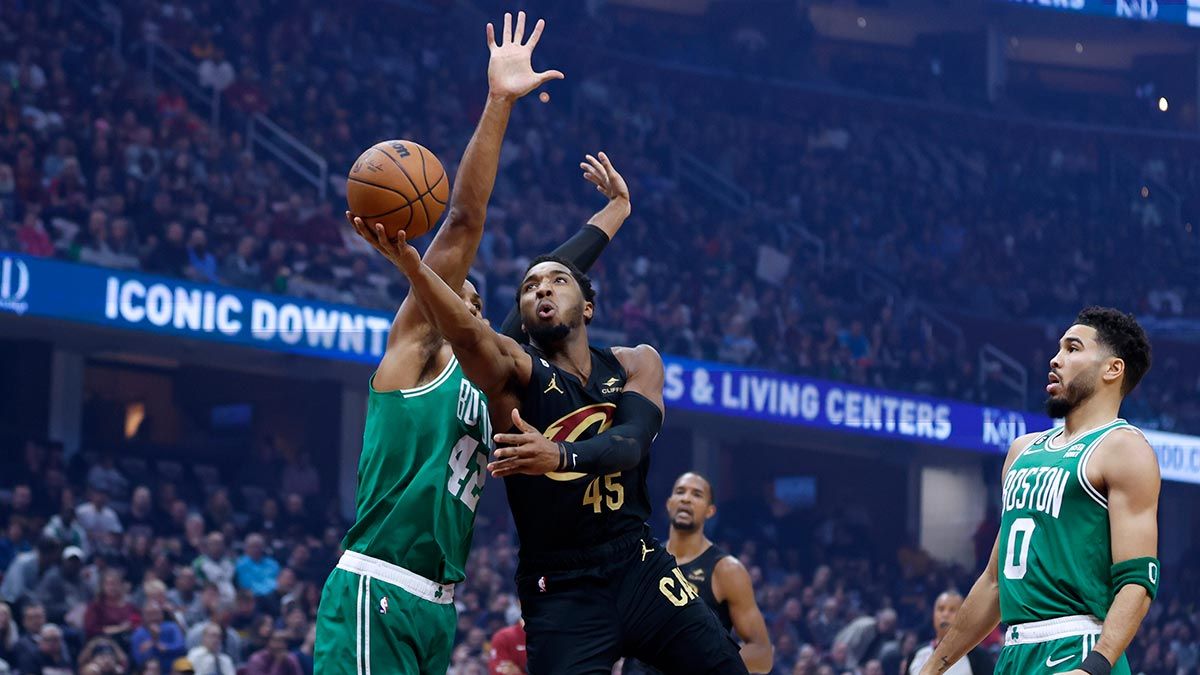 The Cavs have been behind the curve, so to speak, when it comes to 3-pointers in recent years.

But Cleveland came in averaging 34.3 shots behind the arc, and coach J.B. Bickerstaff said he's got no restrictions on how many his team can take.

"Any open shots that teams are willing to give us," he said. "We'll take 'em."

They tried a franchise-record 50 on Sunday against New York and made 23, the second most in club history.

Celtics: Brown and Tatum each have six 20-point-plus games. …. G Derrick White has taken four charges. G Marcus Smart, the only other Boston player to do so, has taken two. … C Robert Williams (left knee surgery) have been inactive for every game, but could return before the end of December.

Cavaliers: Improved to 3-0 in overtimes. ... Kevin Love missed all five 3s after making eight on Sunday. ... F Dean Wade borrowed a push broom from one of the ball boys to dislodge a ball stuck behind the backboard in the first quarter. ... G/F Dylan Windler was available after missing the first games with a sprained ankle. .... PG Raul Neto (ankle) was out after getting hurt against the Knicks.

Cavaliers: Visit Detroit on Friday to start a five-game trip.