The Raptors second-year coach used a small lineup that included Pascal Siakam at center to help finish off the Brooklyn Nets on Wednesday (Thursday, Manial time) and take a 2-0 lead in the first-round playoff series.

Fred VanVleet had 24 points and 10 assists, Norman Powell had a big game off the bench with 24 points and the defending NBA champion Raptors defeated the Brooklyn Nets, 104-99, in a game they trailed for more than three quarters.

Kyle Lowry had 21 points, nine rebounds and forced a big turnover in the closing seconds that led to a game-sealing dunk for Powell.

"It's all feel," Nurse said of the decision to play Siakam alongside VanVleet, Lowry, Powell and OG Anunoby. "I have tried to get my five guys who have played the best on the floor late."

Nurse spent the better part of the second half looking for the right mix to counteract the Nets' decision to switch everything on defense. He finally found the right five in the fourth quarter.

"The adjustments we made put us in a position to be in the game (at the end) with the defending champs," Nets interim coach Jacque Vaughn.

The Raptors raced to a 33-point second quarter lead in Game 1 and blew out the Nets 134-110 after converting a franchise playoff record 22 3-pointers on 44 attempts.

But this game was much closer as the Nets built a 14-point lead in the first quarter.

The Raptors didn't take their first lead of the game until nine minutes remained when Anunoby drove the lane and scored on a left-handed dunk. Toronto was in control after that, stretching the lead to eight on Powell's drive and dunk from the right wing. 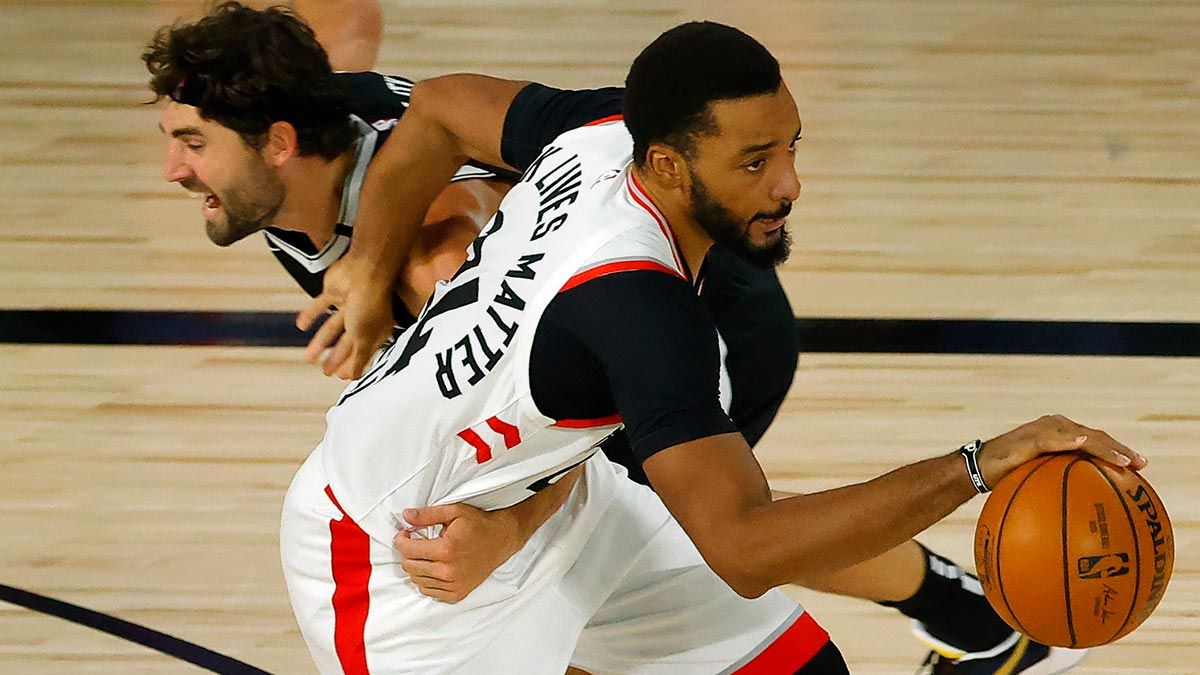 The Nets would have a final shot to send the game into overtime though after Timothe Luwawu-Cabarrot's 3-pointer with 40 seconds left trimmed it to 102-99 and Toronto was called for a shot clock violation on the ensuing possession. But Lowry swiped the ball away on a handoff near midcourt and Powell came up with the loose ball and scored on a breakaway dunk to seal the win.

Vaughn said the last shot was intended to go to Joe Harris, but the play simply fell apart.

"It was good defense by Kyle Lowry," Vaughn said.

VanVleet attributed the win to the team's experience.

"There is no situation we haven't been in before," VanVleet said.

Caris LeVert had 16 points and 11 rebounds, Jarrett Allen and Harris each had 14 points and 15 rebounds for the Nets.

"It's a tough team and they are well-coached," VanVleet said of the Nets.

Vaughn said his team needs to embrace the discomfort of being down in the series, and thinks there is a lot of good from Wednesday's game that can be carried over to the remainder of the series.

"We were locked in," Vaughn said.

VanVleet said the Raptors got together as a team and watched the newly released bodycam video of president of basketball operations Masai Ujiri's altercation with a police officer prior to the NBA Finals celebration at Oracle Arena. The video allegedly shows the officer pushing Ujiri twice.

"It was heavy stuff, man," VanVleet said. "Obviously we are all privileged and Masai is privileged in his world, but you stop and think about how good we got it because there are people who are going to be in that same situation walking down the street who don't have money to fight the case, who don't have 20,000 people in the stands. How many times do cops do that without the bodycam on?"

VanVleet said that is why players are fighting for social justice and equality while in the bubble at Dinsey World.

"You see how quickly things can get ugly because of somebody's word or one bad cop or a bunch of bad cops," VanVleet said. "The system is kind of crooked and it's not designed for us. It's tough. It's emotional stuff. We all have Masai's back and we hope things get resolved."

Game Three is scheduled for Friday.