TORONTO — Fred VanVleet scored 19 of his season-high 35 points in the third quarter, Pascal Siakam had 20 points and 14 rebounds, and the Toronto Raptors extended their home winning streak against the Knicks to 11 games by beating a depleted New York team, 120-105, on Sunday (Monday, Manila time).

OG Anunoby scored 14 points, Scottie Barnes had 13 and Chris Boucher 12 as the Raptors won back-to-back games for the first time since home wins over New York and Sacramento on Dec. 10 and 13.

"I thought we were pretty locked in for most of the game," VanVleet said.

Barnes returned after missing Friday's win over the Clippers because of a sore right knee. He sat out the previous two games while in the health and safety protocols.

"I felt pretty good out there," Barnes said. "I really had my wind. I wasn't so tired."

Toronto, which had 10 players in the protocols for a Dec. 26 loss at Cleveland, had its eight most-used players available for the first time all season.

"This is kind of where you want to be," VanVleet said. "We've just got to continue to get better individually and collectively. I think we'll be a tough team to beat if we can keep growing towards the end of the year."

VanVleet shot 11 for 17 and made a season-high seven of his 13 attempts from 3-point range. He went 6 for 6 at the free throw line and finished with five rebounds and five assists.

"It makes us tough to guard when he's coming down, hitting in transition, coming off screens," Raptors coach Nick Nurse said.

Evan Fournier scored 20 points and RJ Barrett and Obi Toppin each had 19 for the Knicks, who lost their second straight after winning the previous three.

"Overall, I thought some guys stepped up and played good but you're short-handed, your margin for error is small, and we didn't get it done," Knicks coach Tom Thibodeau said.

Fournier returned after missing Friday's loss to Oklahoma City because of a sore right ankle, but the Knicks were without starters Julius Randle and Mitchell Robinson, who joined Nerlens Noel, Jericho Sims, and Wayne Selden in health and safety protocols.

Another starter, guard Kemba Walker, sat for the second straight game because of a sore left knee.

"We have three starters down," Fournier said. "That's a lot."

Toppin's point total equaled his career high. He also had 19 against Toronto on Dec. 10.

"It means something," Toppin said of matching the milestone, "but obviously the loss sucks. We're just going to learn from this game and get better."

After scoring a season-low 80 points Friday, New York topped 100 for the first time in four games.

The Raptors played before a mostly empty arena for the second straight game after Ontario's provincial government reduced capacity limits to a maximum of 1,000 people in an attempt to control the spread of COVID-19. No tickets were sold, and only friends and family were allowed entry. 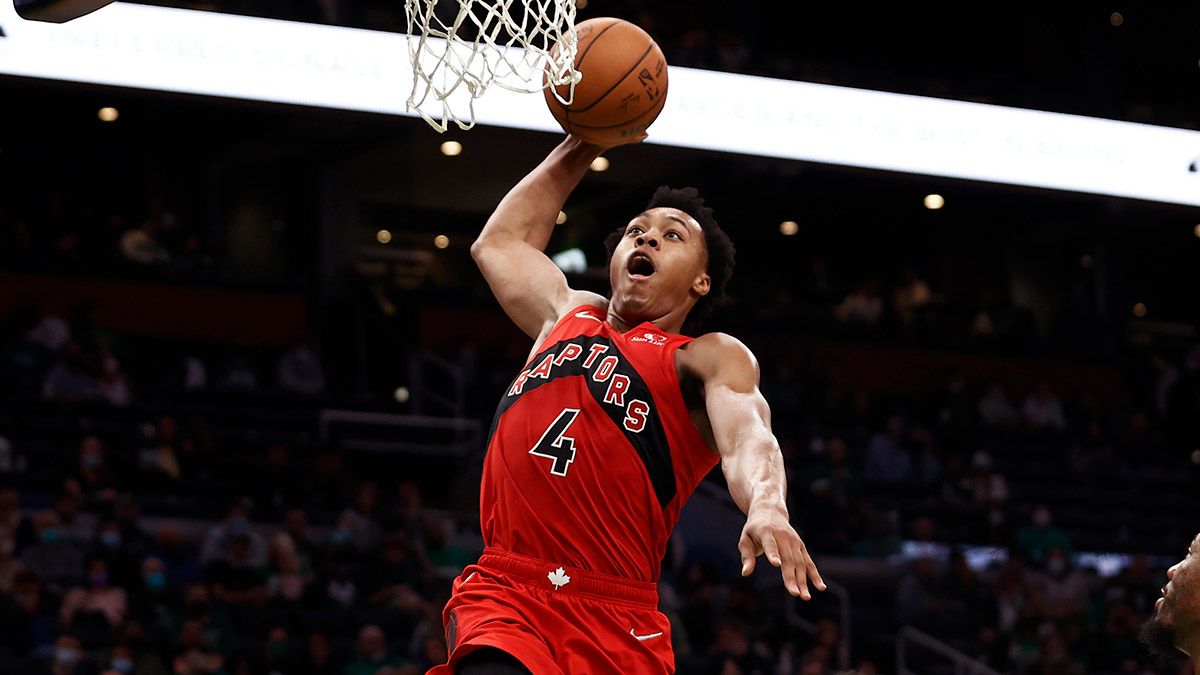 Scottie Barnes goes 4 for 9 in 30 minutes of action.

Rookie G Miles McBride started for the Knicks but was subbed out after five minutes and didn't return until the fourth quarter. Alec Burks started the second half.

"Just the way the game was going, I felt we probably needed a little more offense to try to get things going," Thibodeau said.

Knicks: Associate head coach Johnnie Bryant and assistant coaches Kenny Payne and Daisuke Yoshimoto were absent after entering the health and safety protocols. "Everyone has added responsibility right now," Thibodeau said. … Play eight of their next 10 at home.