More than a year away from home, Raptors finally back

TORONTO — After more than 18 months in exile because of COVID-19 border restrictions, returning home to 'The North' has been a journey of discovery for the Toronto Raptors.

— Head coach Nick Nurse walked into his arena office for the first time since Feb. 28, 2020, and found a forgotten, and very dusty, blue suit hanging in his locker.

— In search of an authentic Toronto experience, forward Pascal Siakam took his first ride on public transit when visiting a local park.

— Guard Gary Trent Jr., acquired from Portland while the Raptors were playing in Tampa last season, started checking out the restaurant scene in his new home, the city where his father played 13 games for the Raptors in 1998.

"I didn't realize how much I enjoyed living here until I came back," guard Fred VanVleet said on Monday (Tuesday, Manila time) at Raptors media day. "I knew I missed the city, but you don't really know why until you come back. It's a beautiful place to be."

Just as beautiful, maybe, will be the collective feeling of joy at the Oct. 20 home opener, when the Raptors take the court to cheers from Toronto's fervent fans.

"I just know it's going to be a movie," Van Vleet said. "There's going to be so much energy. It's that raw feel you can't really describe or anticipate. It's just something in the air."

By then, the Raptors will also have started to discover something else: what it's like to play without guard Kyle Lowry, the franchise icon who was traded to Miami over the summer after nine years with Toronto, including the championship season of 2018-19.

"We all witnessed the great leadership that Kyle provided in a lot of ways," Nurse said. "That will be a void that we're going to have to try and fill."

Some other things to watch with the Raptors as training camp begins:

"His role is going to be huge," Nurse said. "I'm sitting here from Day 1 to give him as many minutes and reps that he can handle. His impact of defending, rebounding, running, spirit, enthusiasm, size, all that stuff gets him in the mix early and often, and he'll stay in there often and late, I would imagine."

Barnes was not one of the four Raptors players made available to the media Monday. He's expected to speak later in training camp.

Siakam won't be ready to start the season after undergoing shoulder surgery in June.

General manager Bobby Webster said Siakam has resumed one-on-one workouts but has not been cleared for contact. "He looks good," Webster said. "He's in a really positive headspace. I think he's happy. He's ready to go and I think he's looking forward to getting back to form."

Siakam was the NBA's Most Improved Player in 2019 and an All-Star and All-NBA Second Team selection in 2020. He was injured late last season and sat out the final four games.

"It's moving in the right direction right now," Siakam said of his shoulder. "I'm super excited, hoping to be back as soon as possible." 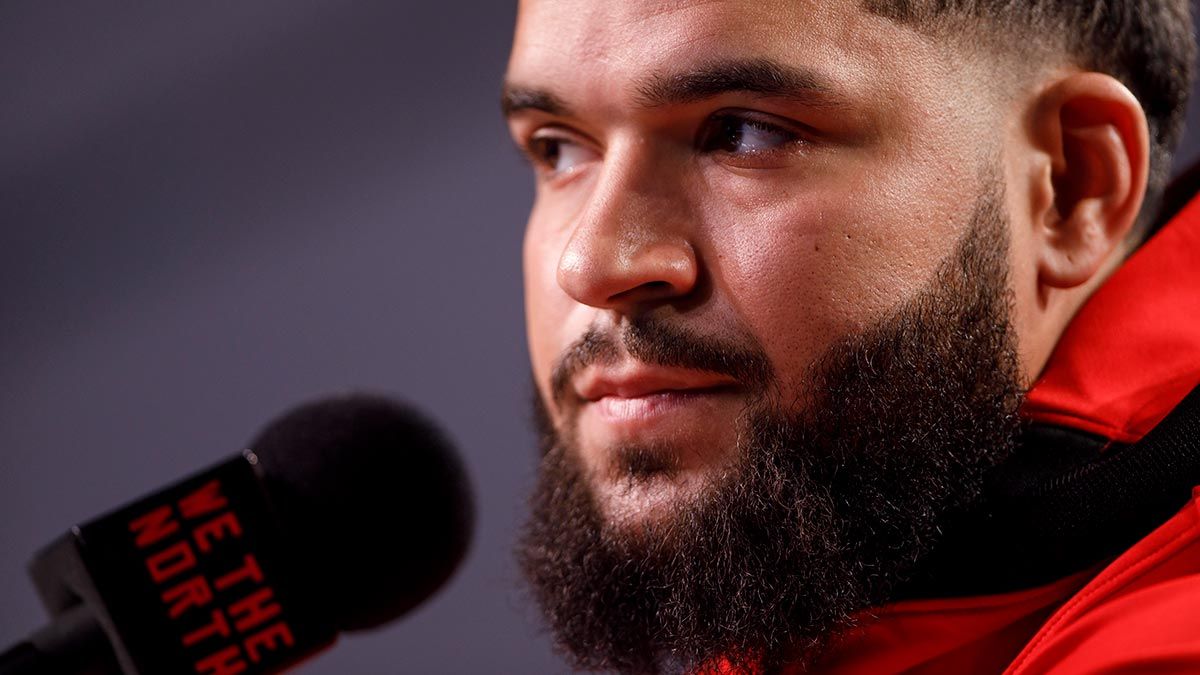 VanVleet, who is 6-foot-1, joked that he's concerned about his place on a rangy roster where 11 of the 15 players under contract are between 6-foot-7 and 6-foot-9.

"I'm just worried about my playing time going down," VanVleet said. "They went and got all these 6-foot-9 guys. It doesn't make sense to have me at point guard anymore."

In the Lowry deal with Miami, the Raptors received veteran point guard Goran Dragic and second-year forward Precious Achiuwa. Achiuwa, like Raptors president Masai Ujiri, is from Nigeria, and once participated in an African youth basketball camp led by Ujiri.

Dragic's Toronto tenure got off to a rocky start after he told an interviewer in his home country of Slovenia that he had "higher ambitions" than playing for the Raptors. He apologized for those comments Monday.

"It came out wrong," Dragic said. "I did apologize and I want to apologize right now, too. It was not my intention."