The two players, proud of their ties to the Philippines, collide for the first time in the professional league.

"I feel like if I was a kid over there watching somebody else that made it, it would give me hope,” said Clarkson, Utah Jazz guard and reigning NBA Sixth Man of the Year.

Clarkson is a dual citizen and has played for Gilas Pilipinas in the 2018 Asian Games in Jakarta, where the country ended up in fifth place.

On the other hand, Green, the No. 2 pick in the 2021 NBA Draft, has previously stated, "I love the Philippines. They show me love and support and I’m just happy to represent them. I have family out there." 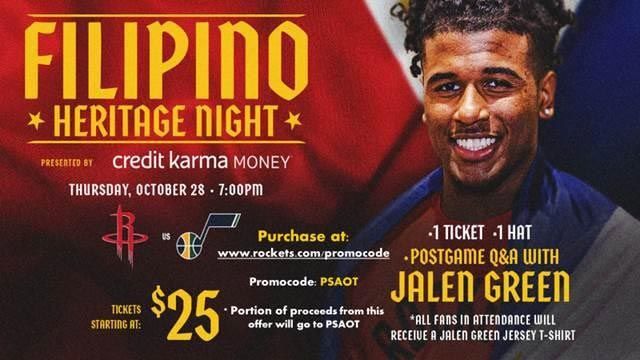 Ticket sales will benefit the Philippine Sports Association of Texas, Inc., who have been at the forefront of pushing these initiative.

It is the sixth time that the Rockets will hold the special night.

Houston hosted the New Orleans Pelicans in April 2014, the Minnesota Timberwolves in February 2015, the Milwaukee Bucks in December 2017, the Denver Nuggets in January 2019, and the Phoenix Suns in December 2019.

Miami Heat have also routinely held the special night in honor of Fil-Am coach Erik Spoelstra, while the Golden State Warriors, the Brooklyn Nets, the New York Knicks, the Sacramento Kings, the Chicago Bulls, the San Antonio Spurs, and the Washington Wizards staged these events to honor the Filipino American communities in their localities.