Fear the Deer? Celtics not worried about that matchup

NEW YORK — Even as they rolled through the second half of their schedule, the Boston Celtics knew there was a notion they should lose.

Tanking a game down the stretch and falling out of the No. 2 seed would have meant avoiding a playoff series with Kevin Durant and the Brooklyn Nets, who were considered a team to be feared.

Not to these Celtics. They aren't afraid of anything.

"We feel confident, we feel strong against anybody and we're going to come to play every single game," Jaylen Brown said.

Their defense made life miserable for Durant. Now they might get a chance to turn it loose on Giannis Antetokounmpo.

The Celtics swept their way into the Eastern Conference semifinals with a 116-112 victory on Monday night in Game Four, becoming the first team into the second round. Jayson Tatum scored 29 points and Brown had 22.

Next up could be the NBA champion Milwaukee Bucks, who hold a 3-1 lead in their series against Chicago. And the Celtics will have home-court advantage, in part because they refused to consider trying to lose their way out of the No. 2 seed to avoid the Nets.

"We said it quite openly, we're not running from anybody and we'll let the chips fall where they may," coach Ime Udoka said.

The Celtics got off to a rocky start to Udoka's first season and were just 18-21 on Jan. 6 after blowing a 25-point lead and losing 108-105 to the New York Knicks on RJ Barrett's 3-pointer at the buzzer. Udoka said his team needed leadership after the game, which Tatum called one of the lowest points of the season.

There wouldn't be many more of them.

"I think that was right around the time we started jelling and clicked and figured it out," Tatum said. "But there was just so many variables in the beginning of the season — new team, health. And honestly, we just started playing better as a team and individually." 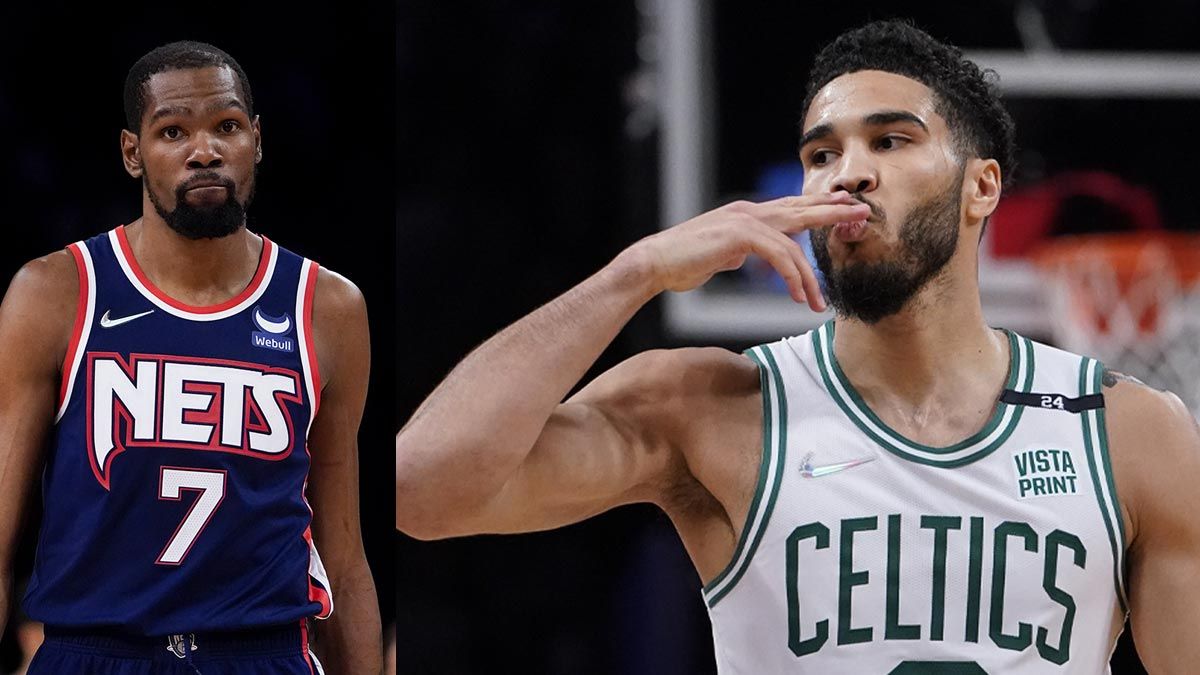 The Celtics make short work of the Nets in what was expected to be a tight series.

Boston went 33-10 from there. Tatum's all-around game grew on the offensive end and the Celtics became a defensive force, led by Defensive Player of the Year Marcus Smart. They left an impression on Durant, who hadn't lost in the first round since his first playoff appearance in 2010 and had never been swept in any series.

"They're an incredible team," Durant said. "They've got a chance to do some big things the rest of the playoffs and they played amazing."

Brown was injured last season when the Celtics were beaten by the Nets in five games in the first round. Once the rematch was secured, it appeared Boston would indeed get the tough test that was predicted when it needed Tatum's basket at the buzzer to win Game One.

From there it was mostly all Celtics, who found themselves getting sharper because they knew what Durant and Kyrie Irving could do.

"I think that was good for us," Tatum said. "I think just knowing that, who they got on their team and what they are capable of had us that much more locked in from the first game."

The Celtics, who got center Robert Williams back from a knee injury midway through the series, were too big and strong for the Nets. It would be a much fairer fight against the Bucks, whose frontline features the NBA Finals MVP in Antetokounmpo.

Nope. The Celtics won't worry about that matchup, either.

"We're not scared of anybody. We're not going to run from anybody," Udoka said.