Julius Randle added 20 points, 16 rebounds and five assists for the Knicks, but sat for eight minutes of the fourth quarter after picking up his fifth foul. Quickley made sure that didn't matter, hitting four 3-pointers in the period.

Russell Westbrook had 31 points, 13 rebounds and 10 assists, with 18 points in a sensational third quarter that allowed the Lakers to tie the game. But with James not in the arena, Anthony Davis struggling through an illness and Carmelo Anthony's shot off in his old home, the Lakers never could take the lead.

They beat Detroit on Sunday after overcoming a 17-point deficit in the game James was ejected from for striking Pistons center Isaiah Stewart in the face and drawing blood. The NBA suspended the superstar forward for one game.

But the best Los Angeles could do in this one was tie it twice after New York dominated most of the first two quarters.

Randle went to the bench with his fifth foul with 9:18 remaining and was hit with a technical foul from there that allowed the Lakers to cut it to 90-87. But Obi Toppin scored before Quickley made a 3-pointer to push it back to eight, and it was back into double digits when another 3 by Quickley made it 105-93 with 4:58 to play.

The Lakers scored nine straight to open the third and cut it to 63-60, and finally tied it for the first time at 79 on Anthony's dunk. 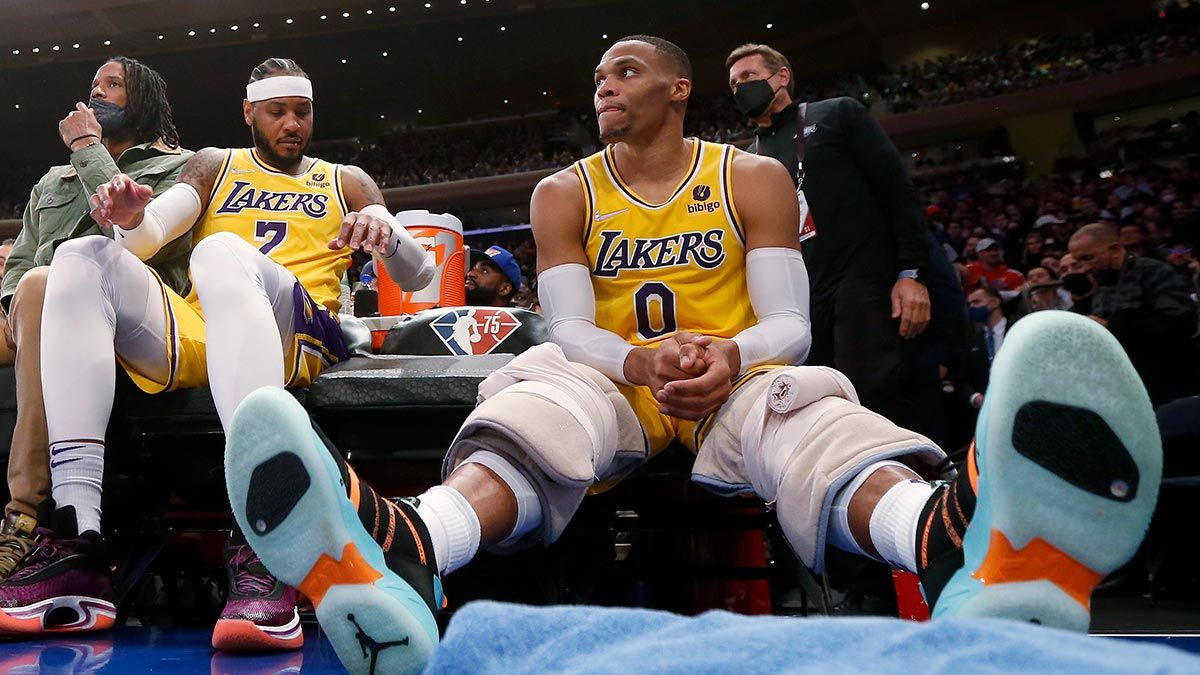 Los Angeles Lakers guard Russell Westbrook sits on the bench next to forward Carmelo Anthony in the second half.

Lakers: Anthony got a loud ovation when he checked in during the first quarter. ... Talen Horton-Tucker missed all eight shots in a scoreless outing.

Knicks: New York played without backup point guard Derrick Rose (sprained right ankle) and injured centers Mitchell Robinson and Taj Gibson. Coach Tom Thibodeau said Robinson, out with a concussion, is doing better but still has to clear the league's protocols before he can return. ... New York has won nine of the last 11 meetings at home.

MISSING OUT ON MSG

Lakers coach Frank Vogel called James one of the classiest players in the league who always plays the game the right way. He spoke with James, who was disappointed to miss a second straight visit to one of his favorite arenas. He was hurt last season when the Lakers played at Madison Square Garden.

"He wanted to play. I don't want to get into it more than that," Vogel said.