Spo after Heat blowout loss: ‘Whatever they have done to us, we can do to them’

The Eastern Conference finals between the Heat and Celtics are as close as can be — heading back to Miami all tied up at two wins apiece. But the individual games have been anything but.

Boston scored 18 of the first 19 points on Monday night (Tuesday, Manila time) on the way to a 102-82 victory in Game Four of the best-of-seven series. The Celtics led by as many as 32 in the third quarter — a big gap, even for a series that has been full of them.

"Sometimes when you have two really competitive teams, it doesn't necessarily mean it's going to be a one-point game," Heat coach Erik Spoelstra said. "It means that it can be flammable, either way. Both teams are ignitable."

And they seem to be taking turns catching fire: The team that has gotten blown out has won the next game each time.

"Whatever they have done to us, we can do to them," Spoelstra said. "None of us are happy about what happened tonight. This is part of the playoffs. There are these extreme highs and lows, particularly when you have two teams that are pretty closely, evenly matched."

The series now shifts to Miami for Game Five on Wednesday, with Boston guaranteed another game at home on Friday. The Heat would host the decisive seventh game on Sunday, if necessary.

"I think human nature plays a part in, when you win a game, you can relax a little bit," said Celtics star Jayson Tatum, who had 31 points in Game 4 after scoring 10 on 3-for-14 shooting the previous game. "Obviously, when we lose a game, we feel like the next game is do or die, and then we come out and play like we did.

"I think we have to have that mindset going into Game Five — that it is a must-win game, because tonight was essentially something like that," he said. "Everybody knew it. We could all feel it. I think that showed in the way we came out."

It was the fourth straight game that has featured a 20-point lead, with two of them topping 30. There have been four lead changes in the entire series — just one in the second half, and none in the fourth quarter.

"It's wild, right," said Miami guard Victor Oladipo, who came off the bench to score the Heat's first basket more than eight minutes into the first quarter after they were already trailing 18-1. "I'm not even sure how to explain it. 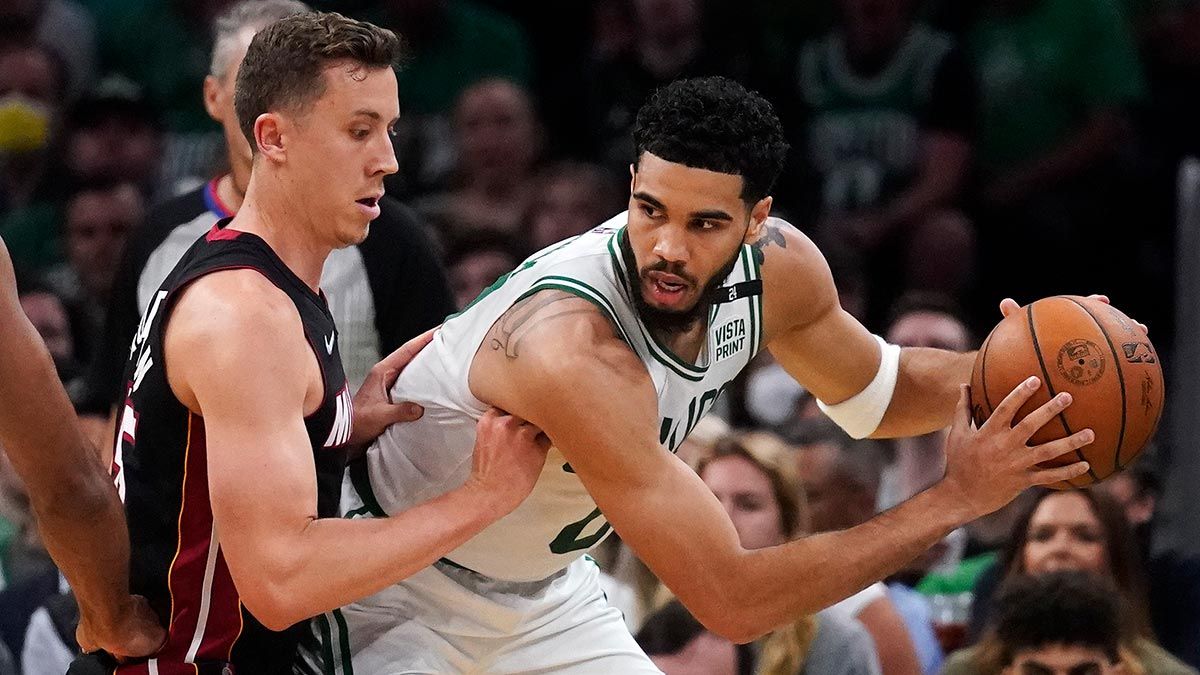 In a see-saw series, Game One was the most competitive of the bunch.

The Celtics led by 13 points early before Miami outscored them 39-14 in the third quarter to take took the lead for good. The Heat nursed a double-digit advantage for most of the fourth.

In Game 2, Boston built a 34-point advantage on its way to a 25-point win. The Heat said they were embarrassed on their home court, and Game 3 was payback; they zoomed out to a 26-point lead, first-half lead.

"Obviously, (it's) because we lost last game," Boston center Robert Williams III said. "I feel like that's how our team is. We need to work on being better in that aspect. We shouldn't have to get punched in the mouth to respond."

Although the Heat saw their 26-point lead cut to one in Game Three, Boston never led in the entire game. On Monday night, the Celtics led by double digits for more than 43 minutes of the 48 minutes despite shooting under 40%, with starters going 3 for 20 from 3-point range.

"It's an inconsistent series from both teams at times," Celtics coach Ime Udoka said. "It's an odd one, honestly."