PHILADELPHIA — Joel Embiid scored 33 points and Ben Simmons had 16 points, 12 rebounds and eight assists to lead the Philadelphia 76ers to a 124-108 victory over the short-handed Brooklyn Nets on Saturday night (Sunday, Manila time).

Tobias Harris added 21 points and 12 rebounds for the Eastern Conference-leading 76ers, who have won five of six.

James Harden had 26 points, 10 assists and eight rebounds for Brooklyn, which was without stars Kyrie Irving and Kevin Durant.

Irving is day to day with a right finger sprain, and Durant is out for a week due to the NBA's health and safety protocols.

Simmons, reportedly an important piece of a potential Philadelphia-Houston trade that never materialized when Harden landed in Brooklyn last month in a blockbuster deal, played aggressively throughout.

Simmons' highlight was a steal and fast-break dunk over Tyler Johnson with 59 seconds left in the third quarter. Simmons finished with three steals.

Embiid surpassed 30 points for the eighth time in nine games. The big man was questionable after landing awkwardly on his right knee in Thursday's 121-105 loss to Portland but showed no ill effects of the injury.

The 76ers took control with a 14-0 run over 3:05 late in the third. Harden tied it at 79 with 5:15 left on a free throw after Danny Green was whistled for a technical foul, one of four in the game.

Then, the Sixers took over. 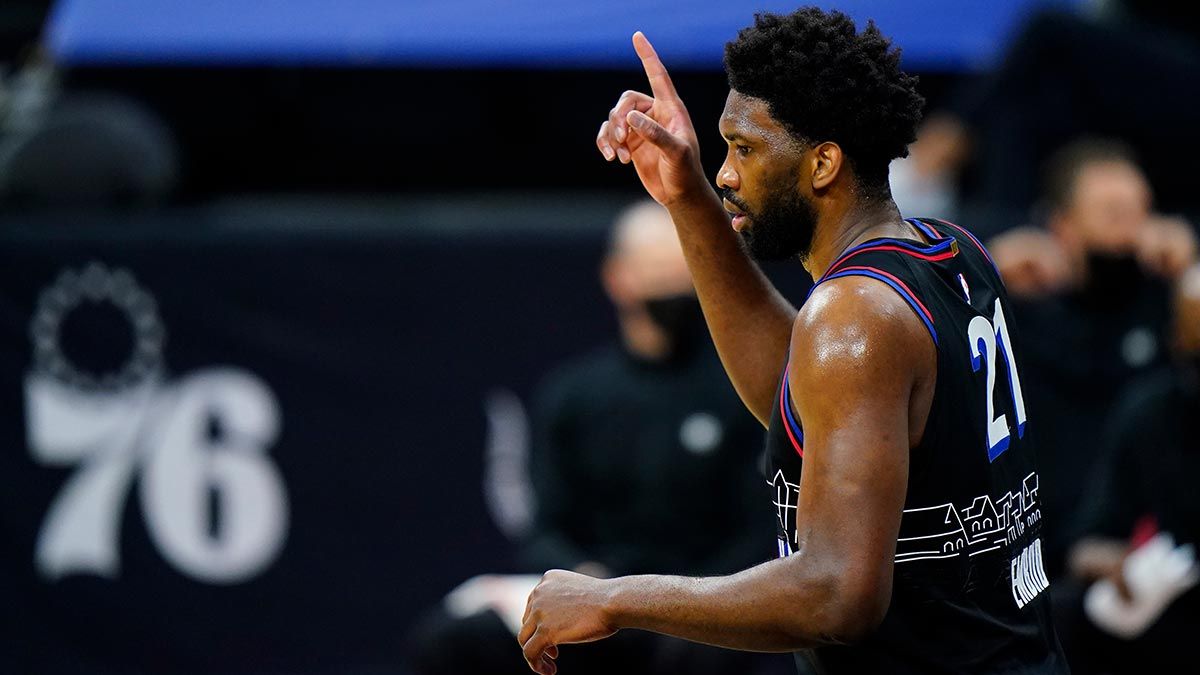 Harris started the spurt with a jumper before Green scored eight straight, including a pair of 3-pointers from virtually the same spot in the left corner. Embiid's two free throws with 2:10 left in the period finished the run, giving Philadelphia its largest lead to that point at 93-79. The Nets were 0 for 4 from the field with three turnovers during the game-changing stretch.

Philadelphia ended the third ahead 102-86, and the Nets never threatened in the fourth.

Durant is expected to rejoin the team Friday, coach Steve Nash said. In a strange scene Friday against Toronto, the Nets star wasn't available to start, entered as a reserve for the first time in his 867-game career and then was pulled in the third quarter.

Durant had three negative COVID-19 tests within a 24-hour period, but someone whom he interacted with on Friday afternoon had an inconclusive test, thus the reasoning for keeping Durant out at the start of the game. When that test eventually came back positive, the NBA took Durant off the court.

That didn't sit well with Durant, who Tweeted his displeasure, or his Nets teammates, who expressed confusion and frustration afterward over the way the situation was handled.

Prior to the game, Nash discussed COVID-19 and NBA protocols in light of Durant's situation. While acknowledging that this season has been a challenge, he is grateful to still be playing.

"Is it perfect? No, but nothing is this year," Nash said. "We have to do our best to navigate the pandemic. It's tricky. That is what we all signed up for, to complete and execute this season. Get through it, and get through it as safely as we can."

Philadelphia coach Doc Rivers said Saturday's morning shootaround was longer than normal and had more of a "mini-practice" feel. With limited practices, the coach is running one shootaround per week more like a practice.

Even the coach participated. Rivers had a successful 14-year career as an NBA point guard, but shot 32.8% from 3-point range.

"Not very well," Rivers said. "I haven't changed at all."

76ers: Simmons received a technical late in the third for taunting. … Philadelphia wore its City Edition jerseys. … Seth Curry had 11 points and four assists. He was listed as questionable due to illness after being pulled from Thursday's loss to Portland due to lack of energy.

Nets: At the Detroit Pistons on Tuesday.

76ers: At the Sacramento Kings on Tuesday.