PHILADELPHIA — Joel Embiid inspired the 76ers with his return from a facial injury, Danny Green and Tyrese Maxey each scored 21 points and Philadelphia beat the Miami Heat, 99-79, in Game Three of the Eastern Conference semifinals on Friday night (Saturday, Manila time).

Wearing a black mask, Embiid had 18 points and 11 rebounds after missing the first two games of the series.

Jimmy Butler scored 33 points for the Heat, who lead the series 2-1. Game Four is on Sunday in Philadelphia.

Embiid sat out the first two games with a right orbital fracture and a mild concussion suffered in the last round. Embiid wasn't the dominant force he was throughout the season. With Green, Maxey and James Harden all crushing Heat rallies with big buckets, Embiid didn't have to carry the Sixers.

But the 76ers sure were glad he was back.

"Any plan where you can have Joel as part of the plan is a much better plan," coach Doc Rivers said before the game.

Even Rivers couldn't draw up a plan that included the play that helped put away the game: Maxey made a full-court sprint to save a basketball with an over-the-shoulder toss. The 76ers kept the ball and Embiid buried a fallaway bucket and sank the free throw for an 86-74 lead.

Embiid was good. Green was better. Green buried made 6 of 7 3-pointers through three quarters, highlighted by ones that snuffed Miami runs and stretched the Sixers' lead to 54-50 and 57-51. Green missed 9 of 10 3s in Game Two.

Tyler Herro, though, had two critical 3s of his own in the final minute and pulled the Heat to 68-65 to close the third. He had 14 and joined Butler as the only Heat in double digits.

Maxey's last 3-pointer made it 92-77, and, suddenly, the Sixers have new life in the series.

The 76ers have never won a playoff series in 19 tries after losing the first two games.

The NBA scoring champ's return kind of helps those odds.

Embiid's status was upgraded from out to doubtful leading into the game, and Philly was buzzing the big man would play. When he jogged out for warmups wearing the mask, Sixers fans erupted and started the "MVP! MVP!" chants that are a staple at the arena. When Sixers public address announcer Matt Cord announced "there are no injuries" on the pregame report, Sixers fans went wild. Embiid easily heard the loudest ovation during lineup introductions and the Sixers were energized by his presence. It was hard to tell at times Embiid had missed so much time.

"Because of the concussion stuff, he couldn't do anything," Rivers said. "So he's not been able to run and doing other stuff that all of us great athletes would be doing."

Embiid is still playing with a right thumb ligament injury that will require offseason surgery. Embiid -- who led the 76ers with 30.6 points and 11.7 rebounds this season -- effected Game 3 just by his presence. Miami All-Star center Bam Adebayo, who scored 24 points in Game 1 and 23 in Game 2, was held to just five in the first half. 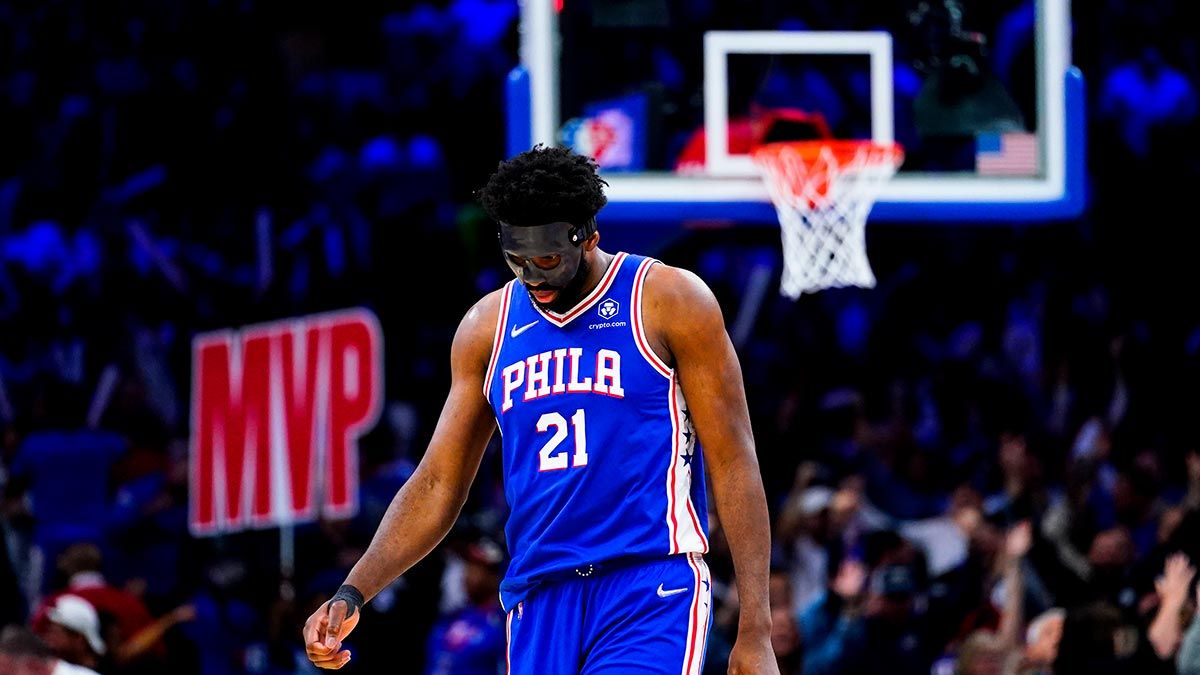 P.J. Tucker jawed at Matisse Thybulle and double technicals were called in the fourth. Tucker elbowed Thybulle to start the commotion.

Heat: G Kyle Lowry started for the Heat after he missed four straight playoff games with a strained left hamstring. The Heat went 4-0 without the former Villanova star.

76ers: Green had his 11th career playoff game with at least five threes. ... The Heat's 34 points were the second-fewest they scored in a first half this season. The Heat scored 33 on Nov. 21 against Boston. ... Seth Curry, traded to Brooklyn in the Harden trade, sat courtside. He's also Rivers' son-in-law. ... Maxey was scoreless in the first half.