PORTLAND, Oregon — Damian Lillard said some dad time at home with his son helped put him in a good place before facing the Lakers.

Lillard, who has been in a shooting slump, scored 25 points before sitting out the fourth quarter and the Portland Trail Blazers took advantage of the short-handed Los Angeles Lakers for a 105-90 victory on Saturday night (Sunday, Manila time).

Jusuf Nurkic added 15 points and 17 rebounds for the Blazers, who led by as many as 34 points despite playing the second of a back-to-back.

Former Blazer Carmelo Anthony had 12 points off the bench for the Lakers, who were without LeBron James because of an abdominal strain.

Leading scorer Anthony Davis was questionable for the Lakers going into the game with a thumb strain. He started but played just seven minutes before leaving with a stomach illness. Coach Frank Vogel said after the game that Davis was throwing up before the game, but thought he could play.

Russell Westbrook, who was averaging 20.2 points, 8.4 rebounds and 8.1 assists, shot 1 for 13 and finished with eight points and seven rebounds.

Dwight Howard said there were no excuses for the loss.

"Every possession, every minute on the floor has to matter," he said.

The Blazers were coming off a 110-106 victory over the Indiana Pacers the night before that snapped a three-game losing streak.

Lillard was averaging just 17.8 points to open the season, well off his average from last season. He had been shooting just 21.7% from 3-point range.

But with his wife out of town, he wasn't as focused on the night's game as much as he usually is.

"My son woke up and and said, `I want macaroni and cheese,' just random stuff in the morning," he said. "So I'm just doing random stuff, where I'm not even thinking about the game." 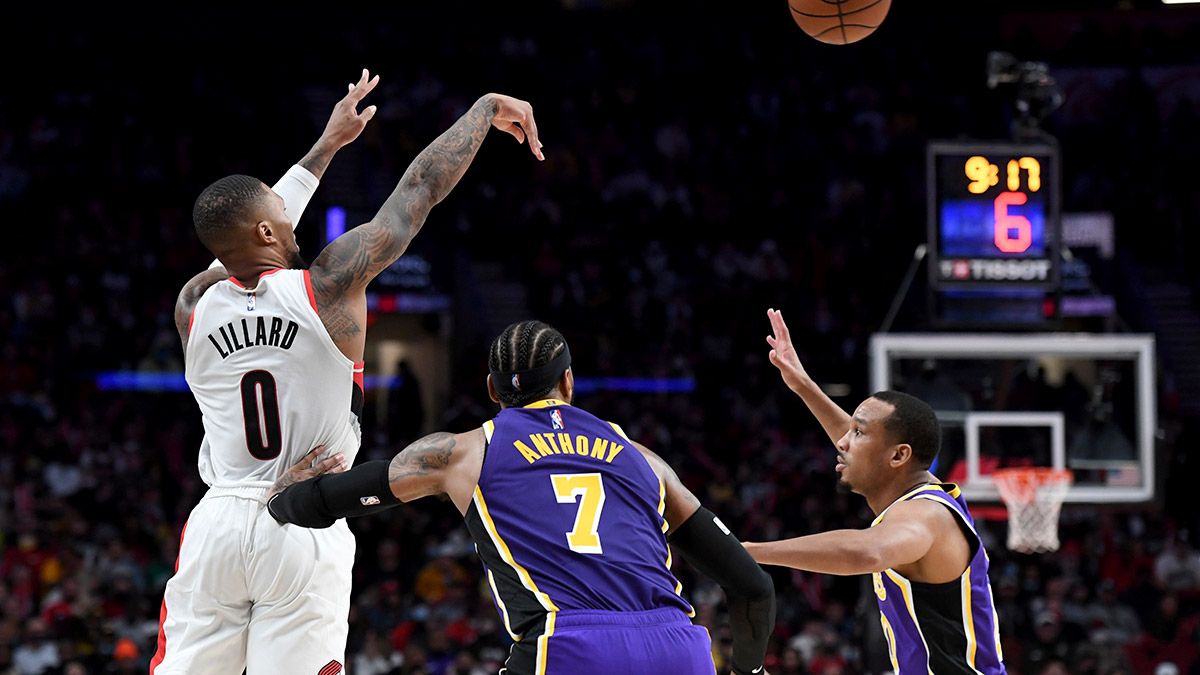 Damian Lillard finds his range after struggling early in the season.

Lillard hit a 3-pointer to open the game and he made two of his first three attempts. He also hit a 3-pointer for Portland's first points in the second half, and finished with six 3s on 14 attempts.

Anfernee Simons' follow shot capped a 13-0 run that put Portland up 25-10 early and the rout was on. The Blazers outscored Los Angeles 36-14 in the first quarter.

Although their offense cooled off a bit in the second quarter, the Blazers still had a 51-36 lead at halftime.

Norman Powell's basket put the Blazers up 69-44 in the third quarter. The Lakers pulled their starters before the final period and fans headed for the doors early.

"We're not the championship team we want to be right now, so to get there, we have to stay humble," Howard said.

HOME IS WHERE THE WINS ARE

Portland has won five straight games at home, but none on the road this season.

Trail Blazers: The Blazers confirmed Saturday that the team has retained an outside firm to investigate "concerns" about the workplace environment involving non-player staff. Both The Athletic and Yahoo Sports reported Friday night that the probe is in response to allegations over workplace misconduct against Neil Olshey, the team's president of basketball operations.

Trail Blazers: Open a four-game road trip on Tuesday against the Clippers.