Green and Go: Warriors Big Three together for first time since 2019 Finals

SAN FRANCISCO — Draymond Green had been on the court all of 11 seconds when he dished off to Stephen Curry for a 3-pointer.

With Green back beside him and leading the defense again following a 29-game absence, Curry dazzled all night on the way to 47 points on his 34th birthday, and the Golden State Warriors beat the Washington Wizards, 126-112, on Monday (Tuesday, Manila time).

Reigning scoring champion Curry shot 16 for 25 with seven 3-pointers, dribbling past defenders and shaking coverage to make off-balanced shots. The Warriors wound up shooting 53.6% from the floor in snapping a three-game losing streak to Washington. Klay Thompson and Jordan Poole scored 20 apiece.

"That was magical," Thompson said of the on-court reunion.

Green, who had been sidelined with a disk injury in his lower back and played for the first time since Jan. 9, finished with six points, seven rebounds and six assists in 20 minutes. It marked the first time he, Curry and Thompson were on the court together since Thompson went down with a left knee injury in the deciding Game Six of the 2019 NBA Finals, won by Toronto. Thompson had surgery then missed last season recovering from a repaired right Achilles tendon.

They shared a hug afterward.

To have Green deliver on both ends immediately meant so much.

"I think what it did for him is what it did for all of us. You could tell the energy picked up," Curry said. "It's not anything more than what's built on 10 years of experience and chemistry and winning and an understanding of how we do things. No matter how much time we have off, we can get right back to it.

"It is crazy to think first time me, Klay and Draymond had been on the court in a very, very long time. We want to keep building on that. We know each other like the back of our hand, we complement each other very well."

Green entered at the 4:50 mark of the opening quarter to a warm ovation, then knocked down a 3-pointer with 2:42 left in the period, yelling "Yeah!" in delight. Coach Steve Kerr opted to bring Green off the bench at least for a game or two — "This is very temporary," Kerr said — since Green is on a minutes restriction initially.

"You heard the crowd when he checked in. Draymond has been our heart and soul for a long time," Kerr said. "He's beloved here in the Bay."

Green said he teased Thompson about coming off the bench at first to feel that love from the crowd.

"It was beautiful," Green said.

Kristaps Porzingis scored 25 points and Kenatavious Caldwell-Pope 19 in the Wizards' fourth straight loss, fifth of six and sixth in a row on the road.

Rui Hachimura's basket with 5:25 to play got the Wizards within single digits at 110-101 before Curry connected moments later. 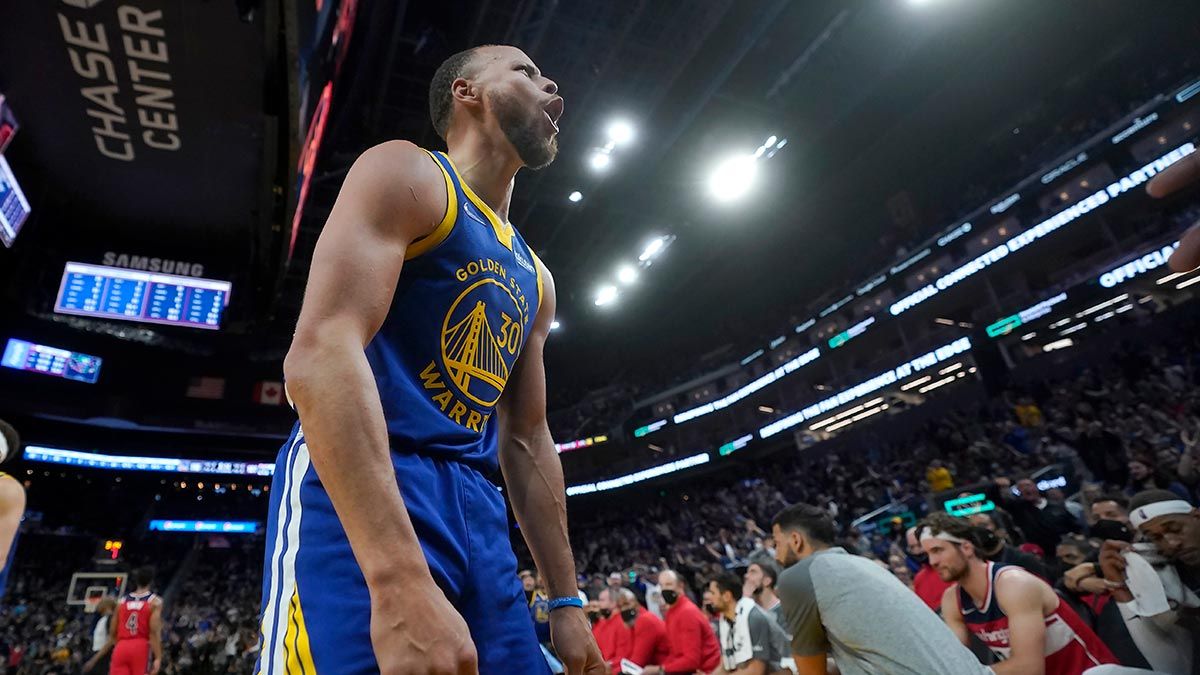 Steph Curry comes up a huge performance on his 34th birthday.

The Warriors and Wizards will play a pair of preseason games Sept. 30 and Oct. 2 in Saitama, Japan, outside Tokyo.

"Participating in the upcoming NBA Japan Games gives us great optimism about the continued growth of basketball around the world and the opportunity to unite through a shared love of the game," Warriors President and Chief Operating Officer Brandon Schneider said.

The games at Saitama Super Arena will be the Wizards' first trip to Japan and the 15th and 16th games in the country for the NBA.

First-year Wizards coach Wes Unseld Jr. was a Warriors assistant in 2011-12 during Thompson's rookie season and the third year for Curry.

"This place was a lot of fun," he said. "Not only the city but the arena, the energy."

Second-year center James Wiseman will play another game — his third — with the G League Santa Cruz Warriors on Tuesday night in Los Angeles, then the Warriors will decide on the next step.

He hasn't played this season while recovering from right knee surgery and not in an NBA game since April 10.

Wizards: Washington shot 6 for 20 from deep in the first half to trail 73-57 at the break and committed seven turnovers that led to 15 Golden State points. ... The Wizards shot 51.2% but were outrebounded 44-35.

Warriors: Golden State missed starting forward Andrew Wiggins because of an illness. ... G Gary Payton II sat out a sixth straight game with soreness in his left knee. ... The Warriors are 12-2 at home against the Eastern Conference. ... Andre Iguodala missed a 15th straight game and 23rd in 24 with lower back tightness but Kerr said "we want to do everything possible to have him healthy" for the stretch run and playoffs.

Wizards: Host Denver on Wednesday night, a respite in the middle of tough stretch with eight of 10 on the road.

Warriors: Host Celtics on Wednesday night, having lost the last three and five of six to Boston at home.