PHILADELPHIA — James Harden took a sensational step forward in the postseason for the 76ers with step-back 3s that rekindled his dominant form. Joel Embiid is playing better by the game, and the MVP finalist might have his best basketball ahead.

Embiid is ready. So is Harden. And if the Miami Heat can't figure out The Mask and The Beard, the next thing they face could be the offseason.

Harden scored 31 points, Embiid had 24 points and 11 rebounds and the Philadelphia 76ers beat Miami 116-108 on Sunday night in Game Four to even the Eastern Conference semifinal series.

The Heat won the first two games in Miami with Embiid out with a right orbital fracture and mild concussion. The 76ers won Games 3 and 4 at home with Embiid and his mask in the lineup.

Oh yeah, this time Embiid is along for the ride. No wonder the 76ers feel better about their chances on this trip to Florida.

The Heat pecked away at the lead and got within five until Harden sank his fifth 3-pointer of the game with three minutes left. Harden crushed the Heat on catch-and-shoot 3s and hit one clutch shot after another for 16 points in the fourth. He at last played in the postseason like the three-time scoring champion the Sixers needed when they traded for him in February.

"Nothing really changed. I just made shots," Harden said.

Harden drilled a step-back 3 for a 114-103 lead that sent the crowd into a frenzy — and the Sixers off to Miami with new life. He finished with six 3s, nine assists and seven rebounds.

"It's just James being James," Rivers said. "I felt like he was going to have a big game tonight. You can just sense it."

"I thought we had some really good looks. We just missed them," Heat coach Erik Spoelstra said.

Embiid worked out the Game Three cobwebs and returned to the dominant form that earned him season-long "MVP!" chants from the Philly diehards. His first quarter was about as good as it gets for the center. He made 5 of 6 shots, including a 3-pointer, and scored 15 points to put the Sixers ahead. Worn out in Game 3 from days of inactivity because of the concussion, Embiid played all 12 minutes in the quarter.

Here's a scary thought for Miami.

"We haven't seen the best of Joel in this series yet," Rivers said. "He's still trying to figure out how to play with that mask sliding all over his face." 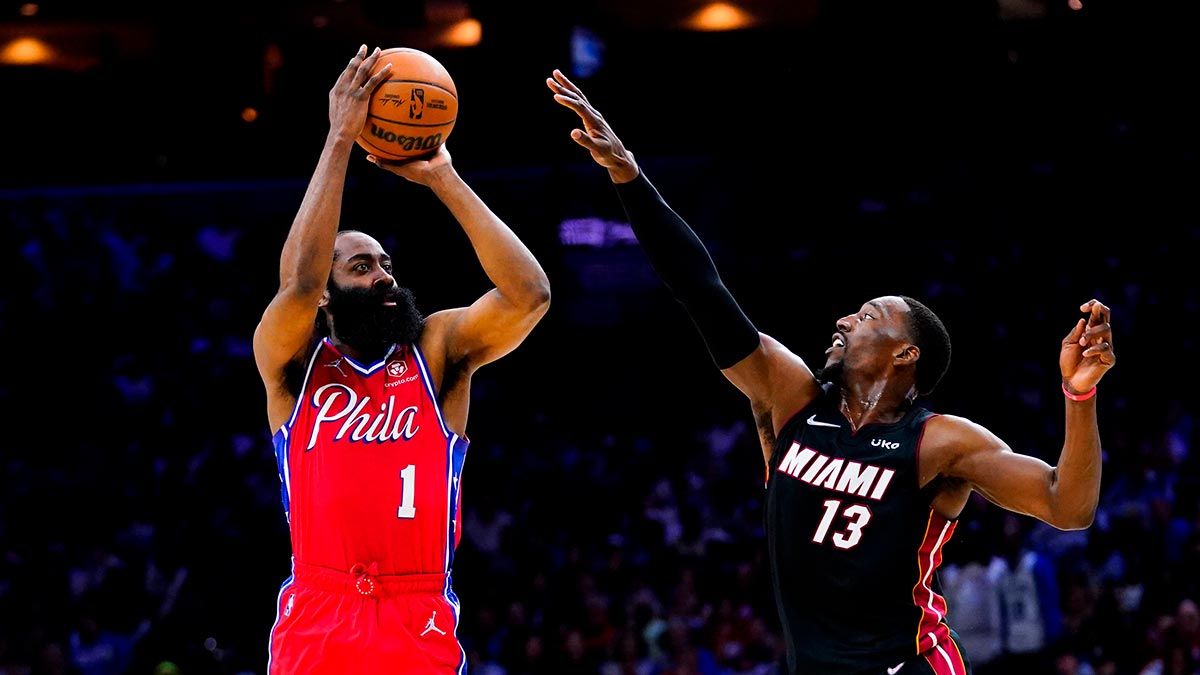 James Harden and the Sixers make it two straight wins after dropping 0-2 behind the Heat.

After a scoreless first quarter, Harden followed Embiid's hot start and scored 13 in the second. He missed his first four shots of the game until he buried a 3 and then got rolling. He scored a bucket in transition during a 15-2 run and then waved his arms toward the crowd, calling on them to get louder.

Philadelphia shot 64% from the floor in the half. But 10 turnovers — that Miami converted into 13 points — kept the Sixers from stretching the lead well into double digits. The Sixers made nine 3s in the half to Miami's four.

Butler kept the Heat in the game with six straight points. He hit a layup, was nailed in the face by Embiid — who was whistled for a flagrant, then helped his former teammate to his feet — and Butler made the free throw. Butler hit a 3 off the possession and the Heat pulled to 74-70.

Butler drew Embid's third foul with 1:37 left in the third and converted the three-point play that pulled the Heat within four. Butler trolled Embiid on Instagram after the Sixers posted a picture of him in the mask and quoted a line from "The Dark Knight Rises."

Butler scored 17 points in the third, yet the Heat still trailed 89-85. The 76ers fans let him have it when Butler fired an airball in the fourth and Harden came right down and nailed a step-back 3 for a 97-85 lead.

"He's a good player. He did what he was supposed to do," Butler said of Harden.

Butler scored 33 points in Game 3 and is carrying the Heat. He's mostly doing it alone.

Embid, well, he has Harden.

Heat: Dewayne Dedmon (illness) sat out Game 4. ... Lowry, who scored his first bucket of the series on a layup, went to the locker room in the first half with a balky hamstring. He missed four straight playoff games before Game 3 with a strained left hamstring. Spoelstra said Lowry was a "warrior" but was unsure if the guard would play in Game 5.

76ers: Tobias Harris lost his voice and was sore when he was clocked in the windpipe late in the game by Bam Adebayo.