With Booker back, Suns set season-high score in rout of Hornets

PHOENIX — Devin Booker had 16 points in his return to Phoenix's lineup and the NBA-leading Suns set a season-scoring high in a 137-106 victory over the Charlotte Hornets on Sunday night (Monday, Manila time).

After missing seven games because of a hamstring injury, Booker played 26 minutes, and sat out the fourth quarter with Phoenix well ahead. The Suns improved to 24-5, moving a half-game ahead of Golden State.

Miles Bridges had 26 points for Charlotte, and former Sun Kelly Oubre Jr. had 16. LaMelo Ball had nine points, 10 rebounds and seven assists, but was 2 of 12 from the field and 1 of 6 from behind the arc.

The Suns never trailed, leading 37-15 after the first quarter and by 36 in the third. In the opening period, Ayton had nine points and nine rebounds and Mikal Bridges scored eight points. Phoenix shot 56% from the floor and was 6 of 10 from 3-point range.

Phoenix, which has won 14 straight at home after losing its first two, scored a season-high 39 points in the third quarter. They had scored 37 in two previous games.

Miles Bridges had 26 points for Charlotte, and former Sun Kelly Oubre Jr. had 16. LaMelo Ball had nine points, 10 rebounds and seven assists, but was just 2 of 12 from the field and 1 of 6 from behind the arc. Ball was scoreless on six shots in the first quarter. 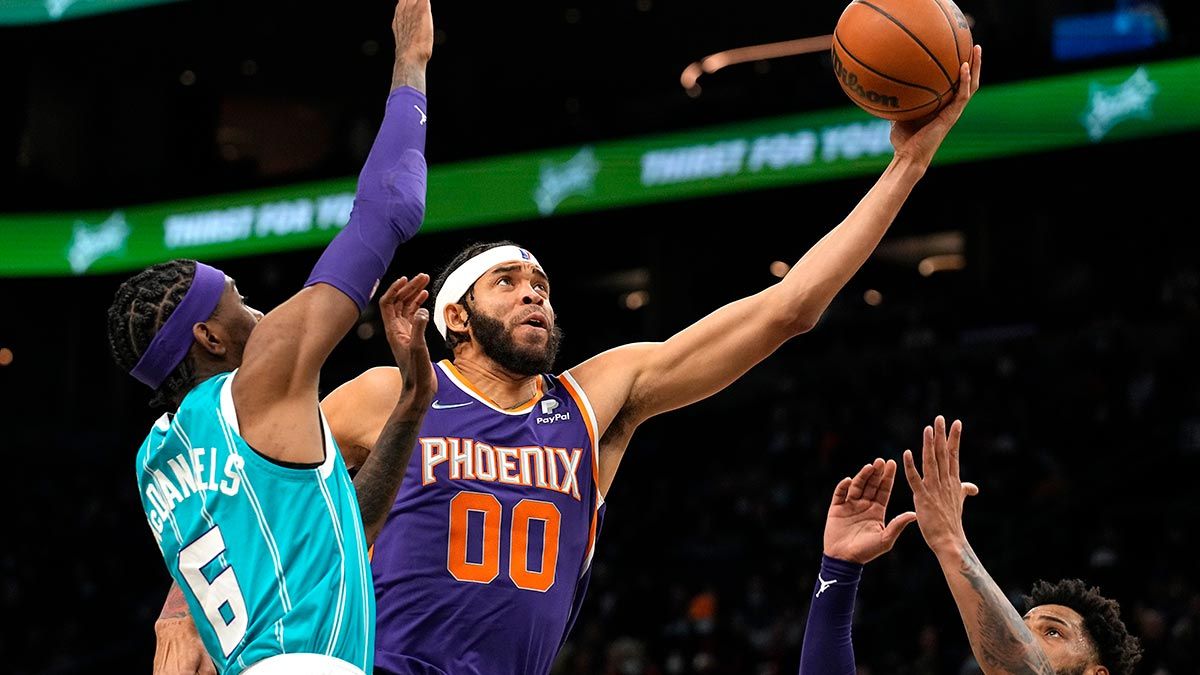 Hornets forard Cody Martin was placed in the NBA's health and safety protocol on Sunday, but there were no other players affected. Three games were postponed league-wide Sunday.

"Everybody's trying to do their best," Suns coach Monty Williams said. "We want to coach and play but we're all dealing with it. It's affecting everybody. Every time you hit refresh there's a new person in the protocol. It's unfortunate but we've dealt with it also."

The game was played with two game officials. Zach Zerba and Eric Dalen, originally scheduled, were held out of the game. Brent Barnaky, the other scheduled referee, was joined by NBA referee Bill Kennedy, who lives in the Phoenix area.

Williams and Charlotte's James Borrego worked together as assistants with San Antonio, and Borrego was on Williams' staff in New Orleans.

"I learned a lot from Monty," Borrego said. "He's a great leader, a great man. I'm thrilled for him where he has his program."

As for Williams, he thinks Borrego doesn't get enough credit for Charlotte playing much better this season.

"You don't hear him being talked about as much as he should be." Williams said

Hornets: At Utah on Monday night.