LOS ANGELES — Devin Booker has a tattoo on his forearm of the message that Kobe Bryant wrote for him on a pair of shoes after they faced each other at Staples Center six years ago: "Be legendary."

Back in the house his idol built with a chance to secure his first team playoff success, Booker put on a performance worthy of the Black Mamba's legend and propelled the Phoenix Suns onward in the postseason.

Booker scored 22 of his 47 points in a phenomenal first quarter, and the Suns won their first playoff series since 2010, eliminating the defending NBA champion Los Angeles Lakers with a 113-100 victory in Game 6 on Thursday night (Friday, Manila time).

After hitting eight 3-pointers, grabbing 11 rebounds and going a stunning 15 for 22 from the field, Booker cast his eyes up at Bryant's two retired numbers as he left the floor amid the cheers from a small, vocal road rooting section. Kobe is never far from Booker's mind on the court, but his breakthrough playoff game felt like a testimonial to Booker.

"Honestly, I was thinking about Kobe and the conversations we had," Booker said. "About what we went through, and the postseason, and being legendary and taking the steps to get there. Seeing that 8 and 24 up there, with the lighting Staples has, it's like it was shining down on you. I know he was here tonight, and I know he was proud."

Afterward in the arena tunnel, Booker got a signed jersey from another hero and mentor: LeBron James, who could only marvel at his up-and-coming friend's brilliance in Game 6.

"I love everything about D-Book," James said. "We've had numerous conversations in the past. When you want to be legendary in this game, you've got to continue to improve not only your game, but also as a man. All the conversations we've had, I can tell he's soaked them up and is using them to his advantage." 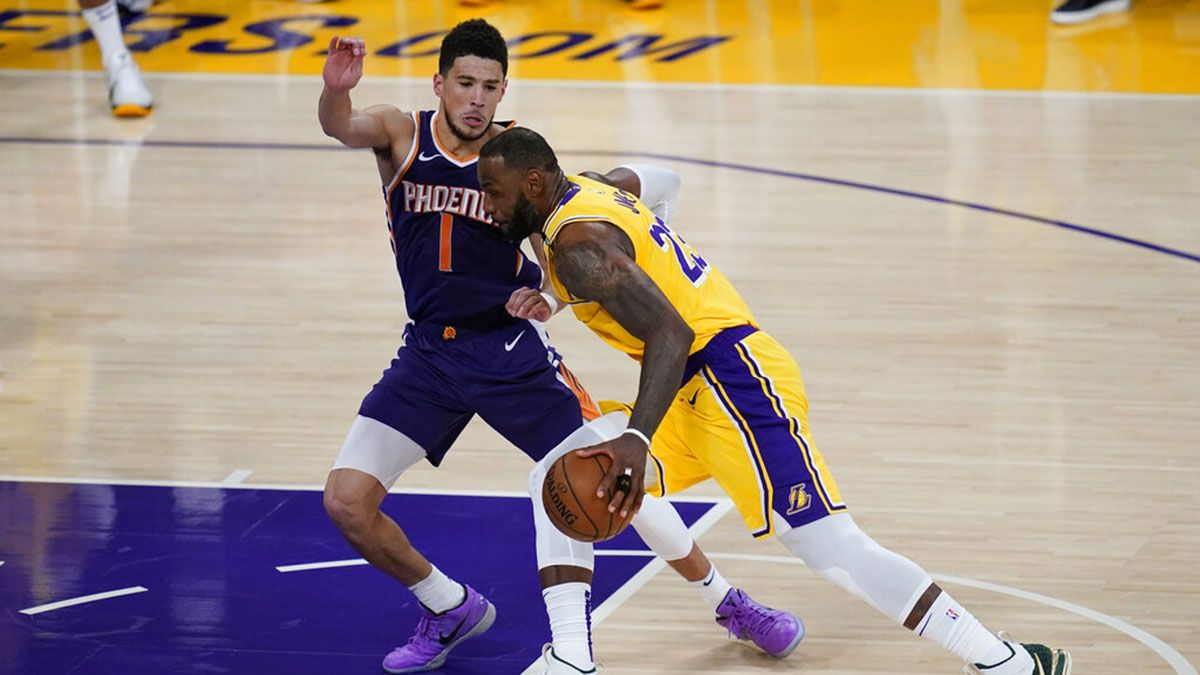 Jae Crowder scored 18 points for the second-seeded Suns, who won three consecutive games to send James to a first-round series loss for the first time in his 18-year NBA career.

Phoenix will meet Denver in the second round. Game 1 is Monday in Phoenix.

Chris Paul had eight points and 12 assists for the Suns, who jumped to a huge early advantage in the opening minutes of Game 6 while Anthony Davis struggled and eventually left due to his groin injury.

Although the Suns lost much of their early 29-point lead, they patiently held off the Lakers and James, who had 29 points, nine rebounds and seven assists.

Booker and Paul stayed strong in the fourth quarter, and Phoenix ended a decade of hoops frustration in the Valley of the Sun with the clinching victory of Booker's first career playoff series.

"It certainly is cool to beat the defending champs, for sure," Phoenix coach Monty Williams said. "But you can only hold onto that for so long, and now you have to move towards another worthy opponent."

Davis returned to the Lakers' starting lineup after missing the second half of Game 4 and all of Game 5, but the eight-time All-Star played less than 5 1/2 minutes before being sidelined again by his groin injury.

Booker and the Suns surged to a 29-point lead in the first half, but the Lakers trimmed it to 10 midway through the fourth quarter. Paul, Mikal Bridges and Crowder all hit big shots down the stretch to make sure the lead never went to single digits.

Dennis Schröder scored 20 points and Kentavious Caldwell-Pope had 19 for the Lakers, who won't get to properly celebrate a title in front of their wild home fans this summer after last October's sterile victory in the Florida bubble. The Lakers were 21-6 before they lost Davis and then James to long-term injuries starting on Valentine's Day, and the champs never regained their best form.

"It never really felt good. but the competitive nature in me wanted to go out there and help the team as best as I could," Davis said. "My body didn't agree. ... Injuries played a big part in putting us in the position we're in. It wasn't the same this year. We just couldn't have our full product on the floor."

Even with a healthy Davis, the Lakers would have hard-pressed to keep up on Booker's latest evening of brilliance.

Booker hit all six of his 3-point attempts and went 8 for 9 overall while the Suns took a 36-14 lead after one quarter. The six-year veteran showed none of the shakiness from earlier in the series against the Lakers, shredding the NBA's best defensive team with his silky-smooth jumper and heady penetration.

While Paul played through a persistent shoulder problem, injuries were insurmountable for Los Angeles, which had a 2-1 series lead on Phoenix when Davis injured his groin midway through Game 4 and subsequently missed Game 5.

Caldwell-Pope played well after missing most of the past two games with a bruised knee, but the Lakers also lost backup guard Alex Caruso to a left ankle injury midway through Game 6.

With the resurgence of the injury problems that forced the Lakers down to the seventh seed in the West, they couldn't recover against the Suns and Booker, who rose to lead Phoenix to its decisive wins.

Booker, who scored 30 points in Game 5, got help in the first quarter of Game 6 from three of Crowder's six 3-pointers. Phoenix took a 21-point lead to halftime, but the Lakers trimmed it to only 13 heading to the fourth quarter with big efforts from James, Schröder and Wesley Matthews, who combined for 27 points.

Suns: Crowder and Torrey Craig got technical fouls during a sequence that included a flagrant foul on Caldwell-Pope. Crowder was then ejected with 30.6 seconds left for a second T, and he sprinted to the locker room. Booker also got a final-minute technical.

Lakers: James indicated he's unlikely to play in the Olympics. ... They didn't face an elimination game during their title run last year. ... Schröder gave a much-improved effort after going scoreless in Game 5. The German guard is an unrestricted free agent this summer, but he repeated his desire to stay with the Lakers.

The Lakers are the third conference finalist from the 2020 postseason to be eliminated in the first round this year, joining Miami and Boston. All four finalists endured significant injury problems this season after a radically truncated offseason, but the Nuggets held off Portland in six games earlier Thursday to advance despite losing Jamal Murray to a knee injury in April.

James had been 14-0 in first-round series during his career, which includes four championships. Only Lakers greats Derek Fisher and Robert Horry ever had more first-round perfection in NBA history, with both going 16-0.

"It doesn't really matter to me in that fashion," James said. "What matters to me is getting this team back healthy."

The NBA's best road team in the regular season won two straight in LA, taking Game 4 after Davis went down at halftime with a groin injury.

Phoenix has won five consecutive closeout games in best-of-seven playoff series — although the Suns hadn't closed out anybody since San Antonio in the 2010 Western Conference semifinals before Kobe Bryant and the Lakers beat them in the conference finals.
___