MIAMI — Miami had eight players available, losing one after he had completed his pregame warmup. Washington had players getting crash courses in Wizards terminology a couple hours before actually getting into the game.

It wasn't an easy night for either side. It was just slightly more enjoyable for Miami.

Tyler Herro scored 32 points off the Miami bench, Jimmy Butler finished with 25 points and a career-best 15 assists, and the depleted Heat held off the depleted Wizards, 119-112, on Tuesday night (Wednesday, Manila time).

Duncan Robinson added 26 points for Miami, making eight 3-pointers on a night the Heat got by with a very short rotation that might get shorter after Butler twisted his right ankle with 1:03 remaining.

Kyle Lowry is in the health and safety protocols, Bam Adebayo is out with a thumb injury and now the Heat will start a two-week road trip on Wednesday in San Antonio with Butler either missing or quite possibly ailing.

Washington trailed by 28 in the third quarter, then got within five late before Miami held on to complete a 4-0 homestand.

"This is a tough environment to begin with, but not having practiced, just doing a ballroom walkthrough ... that's tough to do," Wizards coach Wes Unseld Jr. said. "I give them credit for putting forth the effort they did."

Both teams were without eight players, mostly for virus-related reasons as the numbers remained high around the NBA.

The Wizards were without Bradley Beal, Thomas Bryant, Kentavious Caldwell-Pope, Rui Hachimura, Montrezl Harrell, Anthony Gill, Aaron Holiday and Raul Neto — all because of the league's health and safety protocols.

Miami was without Lowry, Udonis Haslem and Max Strus because of protocols, plus Adebayo, P.J. Tucker, Dewayne Dedmon, Markieff Morris and Victor Oladipo because of injuries.

"When things happen or things change, you've just got to adjust to it and overcome it," Strus said Tuesday, a few hours before game time. "I mean, that's what we're really working with in the world right now."

He was intending to play. About an hour before game time, after warming up, he went into the protocols, and the Heat were down to an eight-man rotation.

"The whole league is adjusting to it," Heat coach Erik Spoelstra said. "I commend everybody for working together through all of this."

The win was the 629th for Spoelstra, breaking a tie with Doug Moe for outright possession of 25th on the NBA's career list. Spoelstra is now within nine wins of No. 24 Chuck Daly.

Spoelstra's father, former NBA executive Jon Spoelstra, once worked for the Denver Nuggets with Moe — and still considers Moe one of his favorites.

"I can't even wrap my mind around those kind of things. ... He's a legend in this profession," Spoelstra said. 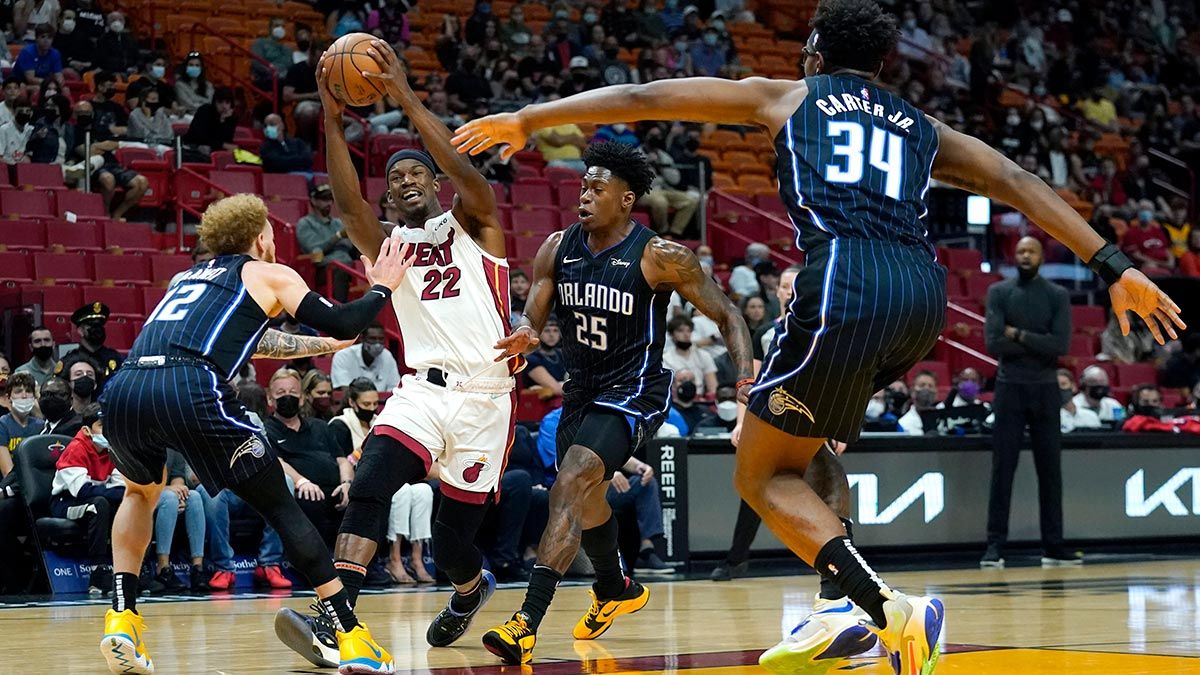 The Heat will start a two-week road trip with Jimmy Butler either missing or quite possibly ailing.

Jenna Schroeder — who was part of the NBA's first two-woman officiating crew back in January — and Lauren Holtkamp-Sterling were two of the referees sent to Miami for the game, joining veteran Ed Malloy. Also making calls, albeit in a different way, was Ruth Riley Hunter. The former Notre Dame star, WNBA star and Olympic gold medalist was the Heat television analyst for the game, with regular analyst John Crotty in the protocols.

Hachimura, who hasn't played a "real" game since the Tokyo Olympics, was listed as questionable to make his season debut Tuesday. And then he went in the protocols, delaying that for at least a few more days. "I feel like he's in a good spot. This is just kind of a little speed bump right now where he can't be with us and be potentially available," Unseld Jr. said.