SAN ANTONIO — San Antonio blew another big lead, but this time it led to a celebration for the Spurs.

Dejounte Murray had 29 points and 11 rebounds and the Spurs rallied in the final minute after blowing a 24-point lead to beat the Boston Celtics, 96-88, on Friday night (Saturday, Manila time), snapping a six-game skid.

"They took a big hit," Spurs coach Gregg Popovich said. "Boston did a great job coming back, taking a lead. We got a little discombobulated, but we hung tough, and they kept playing the whole 48 (minutes). Really, really proud (and) happy for them."

San Antonio closed the game on a 15-0 run to hand Boston its second straight loss.

Keldon Johnson and Derrick White added 17 points each and Tre Jones had a career-high 12 points for San Antonio.

Jayson Tatum had 24 points and 12 rebounds for Boston, and Jaylen Brown added 16 points for Boston. The Celtics have lost four of five on the road.

Murray had 13 points in the final quarter, including eight in final 2:58 to prevent another disastrous finish for San Antonio against Boston.

"Defensively, nobody could stop Dejounte Murray," Boston coach Ime Udoka said. "He got some 1-on-1s and made some tough shots over pretty much everybody. So, he kind of picked his spots."

It marked the second straight season Boston overcame a substantial deficit against San Antonio. The Celtics stormed back from a 32-point deficit to beat the Spurs 143-140 in overtime on April 30. Boston couldn't finish the rally this time.

Consecutive short jumpers in the lane by White and Murray staked the Spurs to a 91-88 lead with 47.4 seconds remaining and they closed the game out with free throws.

"He was special," White said about Murray. "He made all the big plays to ice the game." 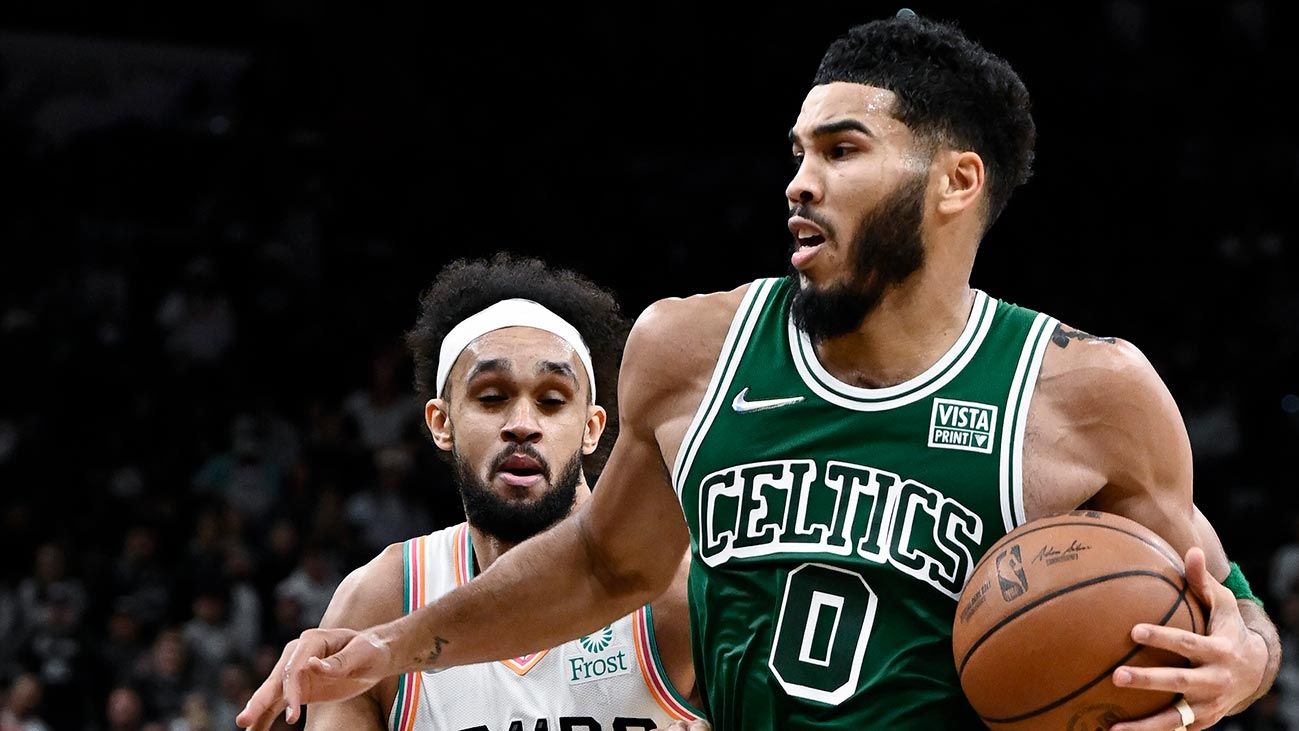 Boston took its first lead at 74-72 on Grant Williams' 3-pointer with 8:17 remaining in the fourth quarter. The lead would stretch to 81-76 on Tatum's second 3-pointer and his own follow of a missed 3-pointer.

The Celtics had to rally after its worst first half this season.

Boston opened the game going 1 for 12 from the field, including missing all three of its 3-point attempts. It prompted a timeout 5 minutes into the game with San Antonio leading 10-3.

The break didn't thaw the Celtics.

Boston finished 5 for 26 from the field, scoring a season-low 14 points in the opening quarter.

The lead would swell to 24 points before the fortunes changed for both teams in the second half.

"Obviously, the second half was a different story there," Udoka said. "We scored the ball extremely well, just can't dig ourselves that hole. Come out flat for no reason. We know what they're going to do defensively. Just have to continue to play together."

Celtics: Boston's Josh Richardson and Robert Williams III both missed the game as they recover from the flu. Celtics coach Ime Udoka said Richardson is expected to join the Celtics tomorrow in San Antonio before they fly out to Toronto. … Dennis Schroder remained in the game after landing on Jakob Poeltl's foot on a 14-foot jumper with 7:26 remaining in the first half. Schroder initially fell to the court clutching his right ankle on the play, which was upgraded to a flagrant foul 1 on Poeltl. Shroder finished with eight points in 38 minutes… The Celtics previous low in the opening quarter was 15 points at Dallas on Nov. 6. Boston also matched its season low of 37 points in the first half, which they against Cleveland on Nov. 15.

Spurs: Murray joined Alvin Robertson as the only players in franchise history with 2,500 points, 1,500 rebounds and 1,000 assists in their first 300 career games. … Murray received a technical foul with 8:22 remaining in the first half after complaining about a non-call to official Lauren Holtkamp. Murray was bent over rubbing his eye after being hit in the face by Marcus Smart on a breakaway layup. … San Antonio has led by double digits in nine games this season.

Celtics: At Toronto on Sunday.