Longtime Clipper DeAndre Jordan thrilled to be with Lakers this time

LOS ANGELES — DeAndre Jordan is back in Los Angeles, and this time he'll be chasing a championship from the Staples Center locker room that has a few more trophies in it.

DeAndre Jordan on other side of LA

The longtime Clippers center signed with the Lakers on Thursday (Friday, Manila time), filling their penultimate roster spot as the 10th 30-something player on the 17-time NBA champions' remarkably experienced roster.

Jordan is a 13-year NBA veteran who spent his first 10 seasons down the Staples hallway with the Clippers before spending the past three years in Dallas, New York and Brooklyn. He led the league in field goal percentage five times and won two rebounding titles during his decade with the Clippers, who reversed the franchise's image as longtime losers on the famed Lob City teams with Chris Paul and Blake Griffin.

But the 33-year-old Jordan understands the landscape of LA sports, and the rim-protecting, lob-finishing big man knows he just gained several million new local fans by switching teams in this rivalry.

"I think I was treated pretty fairly and pretty good when I was a Clipper for 10 years," said Jordan, who kept his house in Malibu after leaving the Clippers. "But obviously this is a big sports town, and a lot of the fans are Laker fans. Even when I was with the Clippers, we understood that. ... I'm focused on now, and this team, and what our goals are ultimately, and I'm just really excited to be here. This is a great opportunity to me, and I just want to take advantage of it." 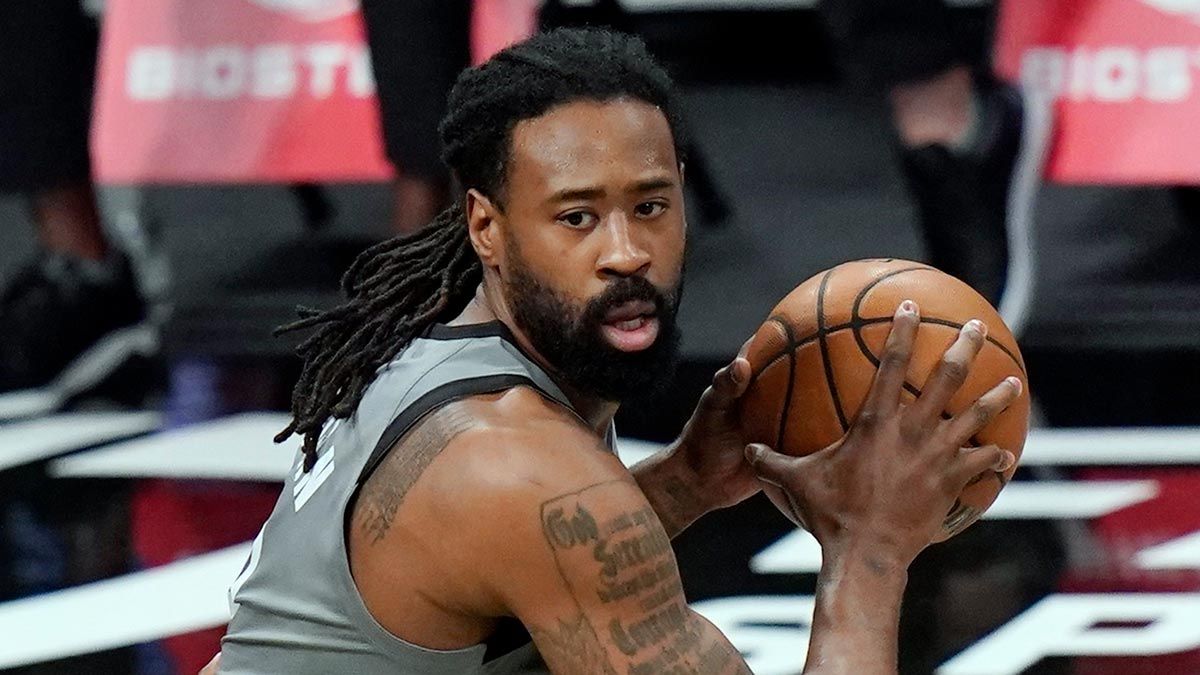 Jordan is joining the Lakers after his career stalled with the Nets. After averaging just 7.5 points and 7.5 rebounds for Brooklyn last season in 21.9 minutes per game — all his lowest totals since 2013 — Jordan was traded earlier this month to the Detroit Pistons, who bought out the remaining two years and $20 million on his contract.

Jordan lost playing time and didn't make his usual defensive impact last season in Brooklyn, prompting the Nets to move on from the center they signed to a four-year, $40 million deal in July 2019. Jordan remains a close friend of Nets superstars Kyrie Irving and Kevin Durant, and he refused to criticize the team for giving up on him and enticing LaMarcus Aldridge out of retirement to replace him.

"We're friends before basketball and after basketball, and I think ultimately we just want to be happy," Jordan said of Irving and Durant. "Being able to compete is something that's very important to me, and they understood that. I did have a great time in Brooklyn, the two years that I was there, being able to experience that culture in New York. I have a ton of memories for the two years that I was there, and I won't forget those, but I'm definitely excited to start this next chapter."

Jordan moved quickly to join the gathering of decorated NBA veterans suiting up next season with the Lakers, who believe they can contend for the franchise's 18th title with a well-traveled group of elite players around Davis, LeBron James and Russell Westbrook.

Playing time could be an issue for at least one of the Lakers' big men if the club doesn't make another move. Los Angeles already has veteran centers Marc Gasol and Dwight Howard under contract along with Anthony Davis, who regularly fills in at center.

Jordan is only 2 1/2 years younger than Howard, but he says he grew up idolizing Howard during the big man's early NBA days with the Orlando Magic. Jordan is also looking forward to being teammates with Westbrook for a very good reason.

"Russ coming downhill, angry, really aggressive all the time, is really tough," Jordan said with a laugh. "Now I can see what this will be like to be a teammate with this guy, knowing I don't have to contest him at the rim every night."