Darvin Ham on tough task with Lakers: ‘I don't feel no pressure’

EL SEGUNDO, California — Darvin Ham recognizes the enormity of the task he is undertaking with the Los Angeles Lakers, and this first-time head coach is not intimidated.

Ham is expected to immediately return a veteran-laden, oddly constructed roster to championship contention. He must create a new philosophy and instill a team identity around 37-year-old LeBron James, oft-injured Anthony Davis and polarizing guard Russell Westbrook, who doesn't appear to be going anywhere this summer.

See Remy Martin works out with Lakers ahead of NBA Draft

That's a daunting order for any coach, let alone a newcomer to the worldwide spotlight that illuminates every move by the 17-time NBA champion Lakers.

But the 48-year-old Ham is no ordinary rookie, as he demonstrated repeatedly on Monday while being introduced as the 28th head coach in franchise history.

"I grew up in Saginaw, Michigan," Ham said. "I was shot in the face by accident, April 5, 1988. You go through something like that, it's going to do one of two things: It's going to make you fearful or fearless. It made me fearless. I don't feel no pressure. It's basketball."

Ham's communication skills and leadership were among the assets that won him one of the highest-profile coaching jobs in North American sports. The former NBA role player also radiates a confident toughness that was immediately recognized by Lakers general manager Rob Pelinka and the committee that selected him to take over for Frank Vogel, who was fired in April after Los Angeles missed the postseason.

Ham could have largely the same roster as Vogel did last season, particularly on top — but the Lakers believe he can get more out of this strange mix. Los Angeles went 33-49 last season while James and Davis both battled significant injury problems and their supporting cast was largely ineffective, particularly on defense.

Ham focused on the honor of coaching a roster that could have nearly a half-dozen of the best players of this era, including Carmelo Anthony and Dwight Howard — even if none of that group is likely in its prime.

"I think (the) sky's the limit," Ham said. "We're not putting a ceiling on our situation. We'll go as far as our daily preparation takes us ... and the things we're going to do in that daily process will lead us to the type of success that this franchise and city has been accustomed to."

The Lakers went 33-49 last season, wildly underachieving after beginning the year with championship aspirations. They're 75-79 in the two seasons since winning a title in the Florida bubble during Vogel's first season in charge.

James is still a force, while Davis' poor health makes him only a part-time player — but Westbrook's frequently dismal play was the focal point of most Lakers fans' discontent last year. The former league MVP scored a paltry 18.5 points per game while struggling with turnovers, missing far too many midrange jumpers and playing intermittently focused defense in his first season with his hometown team.

Westbrook, who never meshed with Vogel, has one year and just over $47 million left on his contract. While many fans would love to see him leave in a trade, the guard definitely appears to be returning this fall.

He was one of four current Lakers who attended Ham's news conference, listening intently alongside Stanley Johnson, Austin Reaves and Wenyen Gabriel. 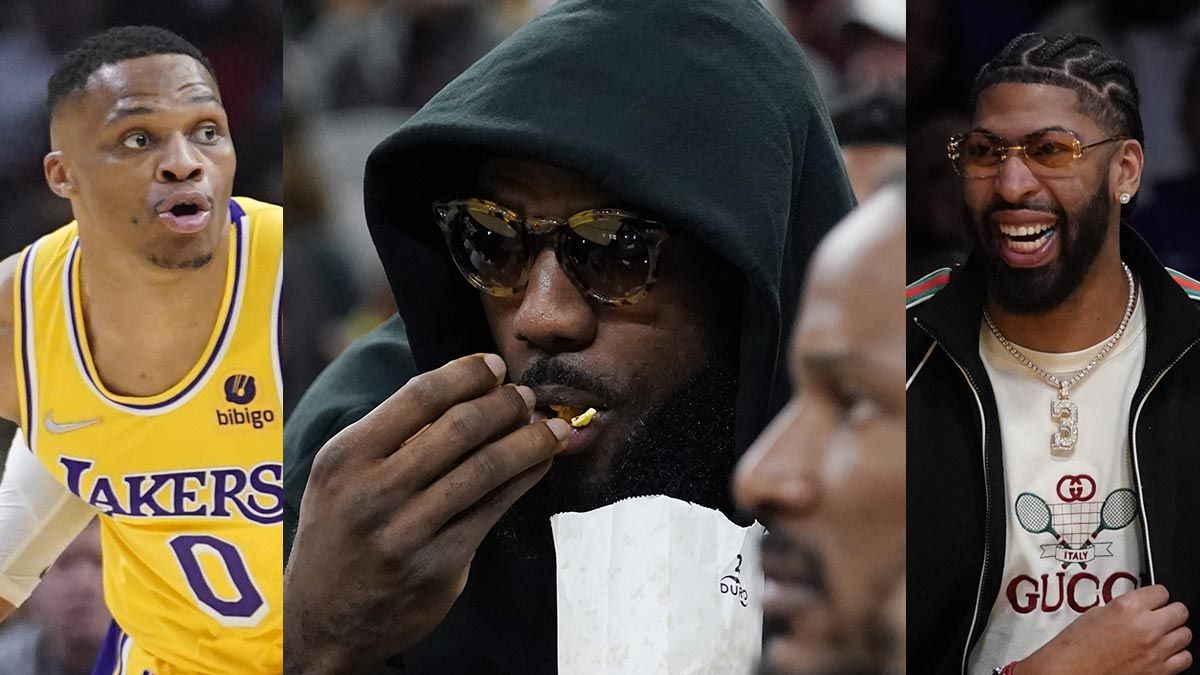 Ham appears to be determined to make it work with Westbrook.

"Absolutely," Ham said when asked if Westbrook was in his plans. "Don't get it messed up: Russell is one of the best players our league has ever seen, and there's still a ton left in that tank. I don't know why people tend to try to write him off. I'm going to approach him like every player I've ever encountered."

Ham said he has already had several conversations with Westbrook about the upcoming season, and he clearly believes he can persuade Westbrook to be even more of a team player.

"The biggest word that came out of those discussions was 'sacrifice,'" Ham said. "We're going to sacrifice whatever we've got to do, and it's not just Russ. It's going to be sacrifices that LeBron has to make, that AD has to make, on down the line through the rest of our roster.

"We have to start on the defensive end. I'm expecting him to be the same tenacious, high-energy player that he's been his entire career. A lot of it now may happen without the ball in his hand. Most of it may happen on the defensive end, but we have to sacrifice. There's no achieving anything without all parties sharing the load, sacrificing and depending on one another."

Ham carved out an eight-year playing career and even won a ring in Detroit by dedicating himself to a cerebral, complementary role. He was a natural for a coaching career, and he was on the Lakers' staff as a development coach from 2011-13 before being hired by Mike Budenholzer in Atlanta.

They went together five years later to Milwaukee, where Ham won another championship as Budenholzer's lead assistant in 2021. Ham only choked up once during his Lakers news conference, and it happened when he expressed gratitude for Budenholzer's mentoring and friendship.

"At least you dropped me off where you picked me up at," Ham said with a laugh.