PORTLAND, Ore. — Damian Lillard scored 30 points, including a buzzer-beating 3-pointer from nearly halfcourt to end the third quarter, and the Portland Trail Blazers handed the Charlotte Hornets their fifth straight loss with a 115-112 victory on Monday night (Tuesday, Manila time).

Anthony Tolliver had a season-high 16 points, all in the fourth quarter, and the Blazers snapped a two-game overall losing streak and a four-game skid at the Moda Center. CJ McCollum finished with 27 points.

The Blazers, who led by as many as 17 points in the first half before Charlotte closed the gap and took a third-quarter lead, have won their last six games against the Hornets.

Tolliver's 3-pointer put Portland up 102-94 but Dwayne Bacon answered with a 3 for the Hornets to keep it close.

Cody Zeller's layup pulled Charlotte within 109-107 with just over three minutes to go and P.J. Washington made a pair of free throws to tie it. Tolliver's 3-pointer gave the Blazers a 112-109 with 2:11 left before Lillard's layup appeared to sealed it with 17.3 second to go. 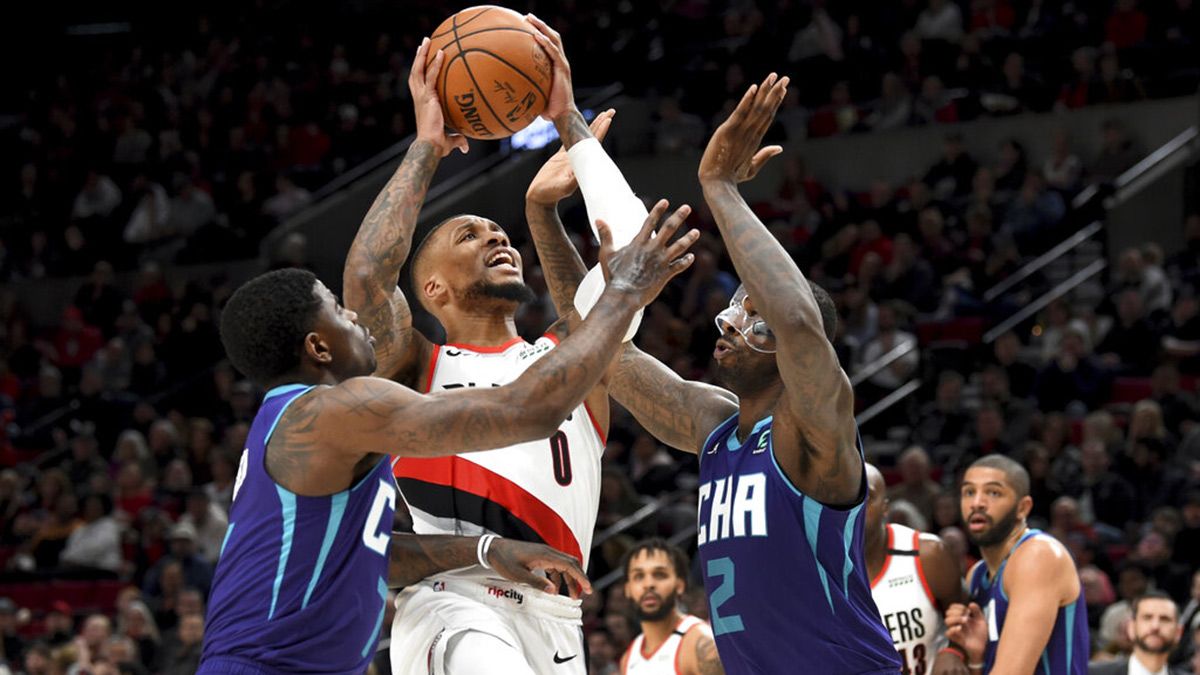 Damian Lillard tries to get a shot up over Marvin Williams and Dwayne Bacon.

Both teams have been struggling to start the new year. Portland currently sits at 11th in the Western Conference while the Hornets are in ninth in the East.

Terry Rozier had 27 points to lead the Hornets, who were coming off a 100-92 loss at Phoenix the night before. Monday's game against the Blazers was the third of a four-game road trip.

Charlotte coach Brian Travis started Zeller at center for Bismark Biyombo, who did not play.

Hassan Whiteside was back in Portland's starting lineup after missing Saturday's loss to Milwaukee because of a respiratory illness. But Mario Hezonja missed the game because of a sore back.

The two teams appeared to be fairly evenly matched through the first quarter, but Portland began to pull away midway through the second, when McCollum's driving layup made it 43-37.

The Hornets hit four straight 3-pointers to open the second half, closing the gap to 62-58. McCollum's 3 ended the run.

Graham 's 3-pointer got the Hornets within a point at 67-66, but they couldn't pull ahead until Willy Hernangomez's layup made it 80-78. Charlotte made nine 3-pointers in the third quarter alone.

Lillard's heave from more than 40 feet out gave the Blazers a 91-89 lead to start the final quarter.

Hornets: It was the first of two meetings between the teams, the Blazers visit Charlotte on March 24. ... The Hornets have not beaten the Blazers since January, 2017. The team has not won in Portland since March 2008 — a streak of 12 games.

Trail Blazers: The game ended Portland's short two-game home stand, with the next three on the road. ... Guy Fieri was at Monday's game. ... Lillard had 14 points in the third quarter alone. ... Tolliver also had 11 rebounds.

The Hornets conclude the road trip on Wednesday against the Denver Nuggets.

The Trail Blazers visit the Houston Rockets on Wednesday.