BOSTON — Stephen Curry scored 30 points, hitting five 3-pointers and adding a one-handed scoop shot in the final minute to help the Golden State Warriors clinch a 111-107 victory over Boston on Friday night and snap a five-game losing streak against the Celtics.

Andrew Wiggins scored 27 and Kevon Looney had 10 rebounds for the Warriors, who won their third straight game to reclaim sole possession of the NBA's best record (24-5). It was Steve Kerr's 400th coaching victory.

Jayson Tatum scored 27 points and Jaylen Brown had 20 points and nine rebounds for the Celtics, who placed five players in the COVID-19 protocol in the 24 hours leading up to the game. Robert Williams III grabbed 11 boards

The crowd was peppered with fans in Curry jerseys who cheered for him and the Warriors and mustered an "M-V-P!" chant when he went to the line. But when he fouled out in the final seconds, the Boston fans stood to wave him goodbye.

In his first game since breaking the NBA's career 3-pointer record at Madison Square Garden, Curry hit back-to-back 3s on his first two shots of the game, giving the Warriors an 11-point lead just four minutes in. He made his last with about 4 1/2 minutes left to complete an 8-0 run after the Celtics had cut the deficit to two points.

Boston again got within a basket — the last time on Marcus Smart's second-chance 3 with 4.2 seconds left. But Damion Lee made a pair of free throws with 2.8 seconds to play to ice it. 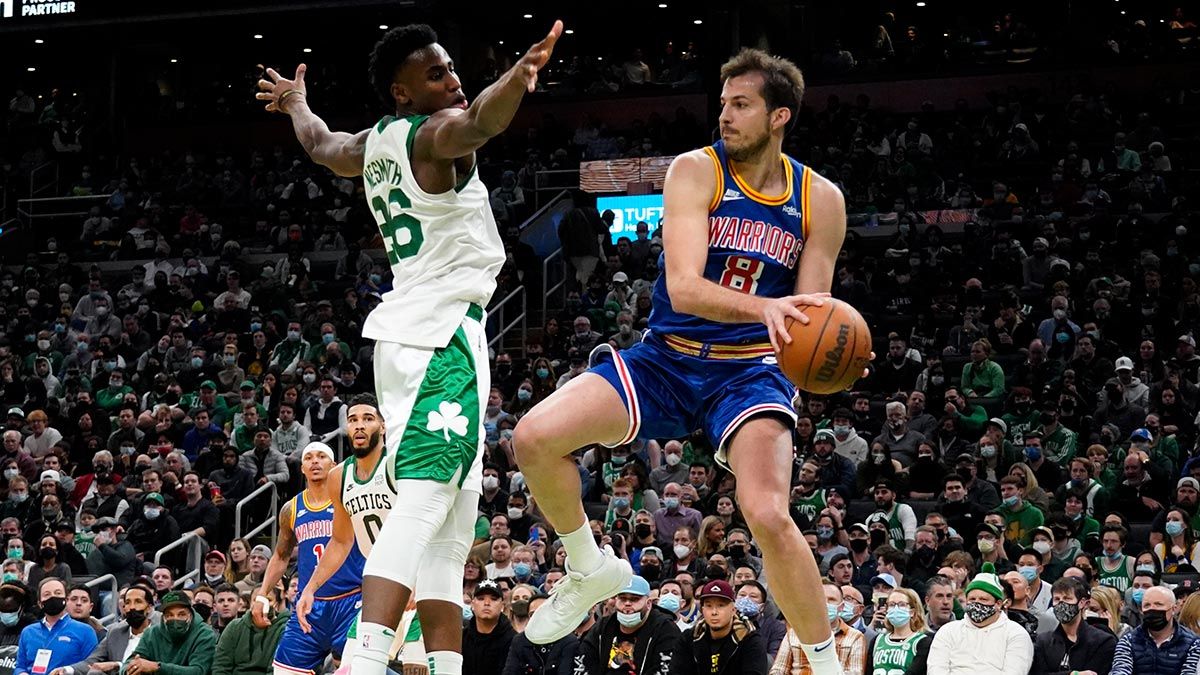 The Celtics cut a 20-point, second-quarter deficit to 10, getting back-to-back 3-pointers from Josh Richardson and Tatum and an 18-footer from Brown to make it 64-54 just before the half.

But on the Warriors' last possession of the half, they inbounded the ball to Curry with 0.9 seconds left. He fired up a 50-footer but Smart fouled Curry as he landed, giving him three free throws with 0.1 second on the clock; Celtics coach Ime Udoka picked up a technical, making it four.

Curry hit them all — his only points of the quarter.

But the Celtics scored the first seven points of the second half during a 17-5 run that made it a two-point game midway through the third. The Warriors led 82-75 with three minutes left in the third, before Boston scored the last six points of the quarter and then took an 84-82 lead on Tatum's 3-pointer to start the fourth.

Curry scored 38 and 47 against the Celtics last season — making 11 3-pointers in Boston — but the Warriors lost both matchups. ... The Celtics fell to 2-1 at home in December. ... The Warriors are 7-0 on ESPN this season. ... Celtics guard Romeo Langford remained on the court for an extended period after taking Wiggins' accidental elbow to the head with about five minutes left in the first quarter. Langford made both free throws and went to the locker room; the team said he was out with neck pain.