The Magic took their first lead of the night at 106-103 when rookie Franz Wagner drilled a step-back 3-pointer with 1:45 to play. Wagner had 15 points, while his brother, Moritz Wagner, chipped in 12 points off the bench.

Anthony, who returned after missing the previous six games with an ankle injury, had his ninth 20-point game and chipped in eight rebounds and seven assists.

Orlando outscored Denver 32-20 in the third quarter and dominated the fourth to win for the first time since Nov. 17 in New York. Also, the Magic won for just the second time at home all season — both victories coming as a result of fourth-quarter rallies against Western Conference powerhouse teams.

The Magic came into the night ranked 28th in the NBA in field goal percentage, but they shot a season-best 54.3% from the floor against the Nuggets. It was the first time all season that Orlando sank at least half its shots.

Orlando also ended a 10-game losing streak against Denver, a streak that dated back to March 15, 2016. The Magic's rally ruined the return of Nuggets forward Aaron Gordon, who played at the Amway Center for the first time since Orlando traded him to Denver on March 28. Gordon, who spent seven seasons in Orlando from 2014-21, scored 17 points, grabbed eight rebounds and had three thunderous dunks on Wednesday.

Monte Morris scored a season-best 22 points, while Nikola Jokic had 18 points, 15 rebounds and seven assists for the Nuggets.

After ending a six-game losing streak on Monday in Miami, the Nuggets fell to 3-7 on the road. They are in the midst of a seven-game, 13-day road trip.

Jokic had a double-double in the first half as the Nuggets raced to an early 16-point lead and had a 63-47 edge at intermission. Gordon supplemented Jokic's work with 11 first-half points and three dunks. 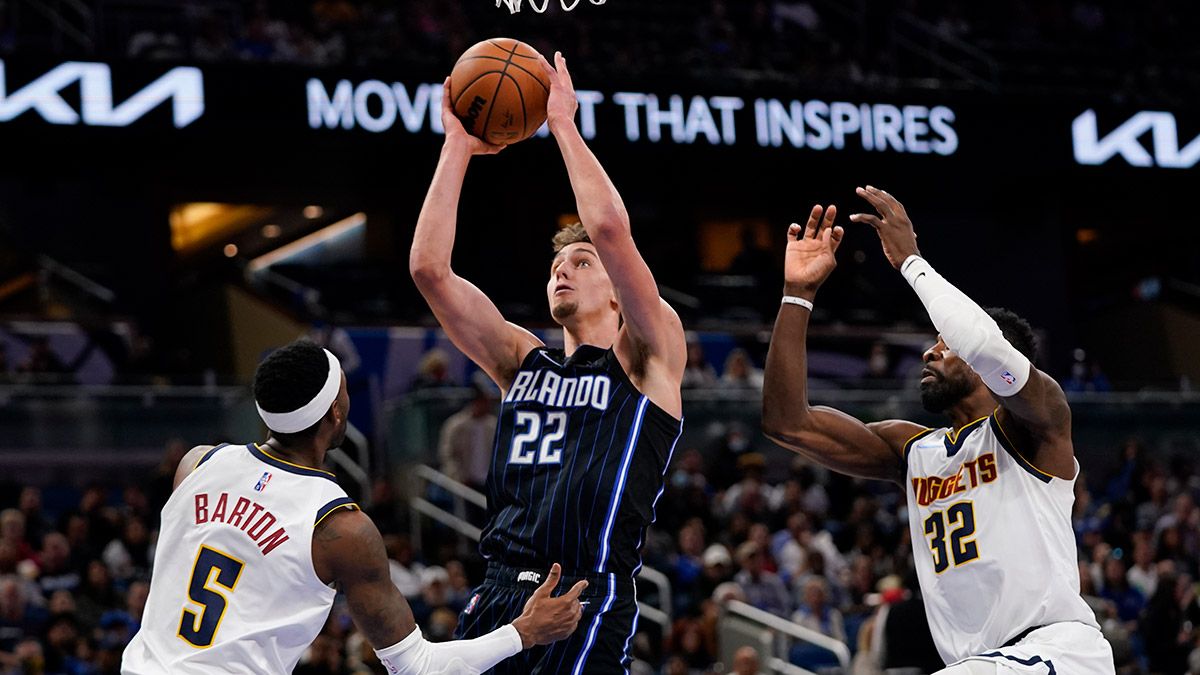 Nuggets coach Michael Malone raved about how Gordon has embraced his role in Denver. He came into Wednesday averaging 13.9 points on 51.7% shooting.

"When we traded for him at the deadline last (season), we went 19-6 to close out the season with Aaron in the lineup," Malone said. "To have an offseason and a training camp with Aaron, I think this is the best Aaron Gordon has ever played. What he is doing on both ends of the floor for us is remarkable."

Gordon's rap song, "Pull Up" from 2019, blared from the Amway Center PA system while the forward went through his pregame warmups.

Nuggets: Malone said that he and President of Basketball Operations Tim Connelly spoke on Wednesday about possible wing additions to the roster with the Nuggets down several players. Jamal Murray has yet to play following knee surgery, while Michael Porter Jr. is out for the season with a back injury. … The Nuggets were also without guard Austin Rivers, who was placed on the NBA's health and safety protocols. That kept Rivers from playing in Orlando, where he starred in high school following his father, Doc Rivers' stint as coach of the Magic.

Magic: After further evaluation, Orlando determined guard Jalen Suggs won't need surgery to repair the fractured right thumb he suffered on Monday. As of Wednesday, Suggs ranked seventh among rookies in scoring (12.3) and third in assists (3.6). … Three years into his NBA career, center Mo Bamba is starting to live up to the promise of his 2018 No. 6 draft spot. Bamba came into the night third in the NBA in blocks (2.19) and 17th in rebounding (9.4).

Magic: At Houston on Friday night.