ATLANTA — If Trae Young is the unquestioned star of the Atlanta Hawks, then Clint Capela is the backbone.

A pretty good trash talker, too.

The burly, 6-foot-10 Swiss center has given the Hawks the gritty defensive presence they so desperately needed.

Without Capela, it’s hard to envision Atlanta preparing for its first appearance in the Eastern Conference semifinals since 2016.

“He’s the anchor for us,” interim coach Nate McMillan said. “Defensively, he’s been the guy all season who cleans up our breakdowns and mistakes on the perimeter.”

Capela was acquired by the Hawks from Houston last year at the trade deadline — part of a 12-player deal that signaled Atlanta was ready to take the next step in a massive rebuild that produced three straight dismal seasons.

For the first time in the overhaul, the Hawks weren’t taking on a big salary just for the sake of future cap space. They had big plans for Capela, even though a foot injury prevented him from suiting up for his new team before the pandemic shut down the 2020 season. 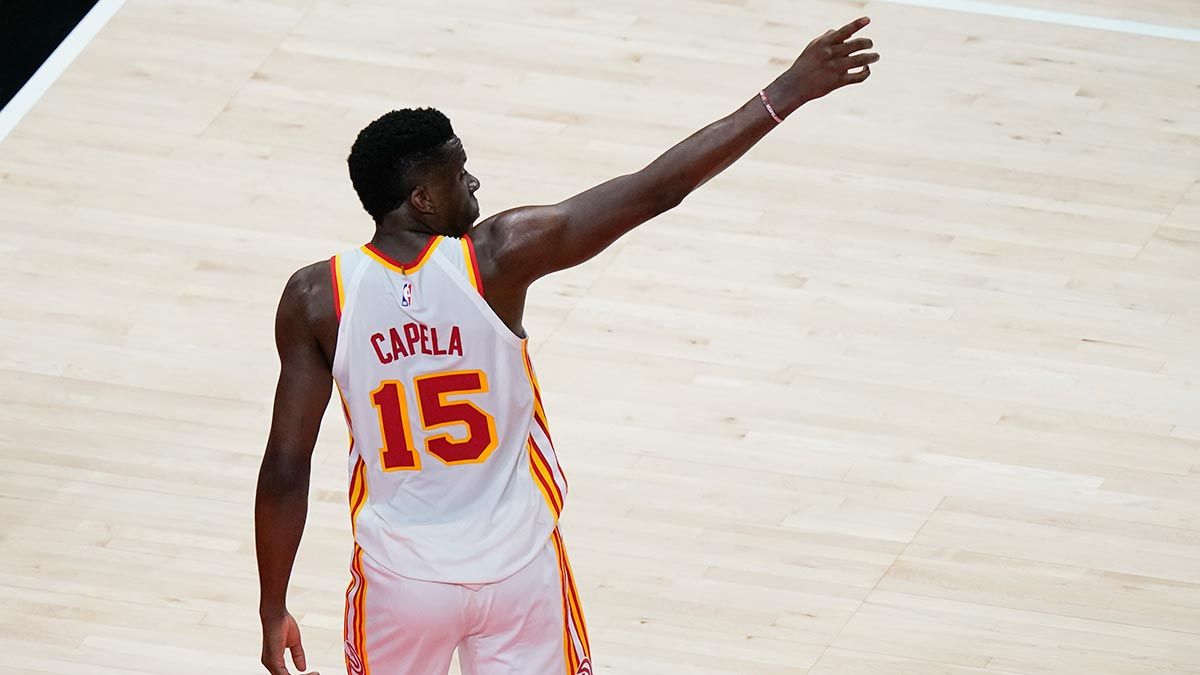 Capela played all but nine games this season, giving the Hawks one of the best stoppers in the league (even though he was inexplicably excluded from the finalists for the defensive player of the year award).

Capela led the NBA in rebounding (14.3 per game) — the first Atlanta player to accomplish that feat since Dikeme Mutombo in 1999-2000 — and averaged 2.0 blocks as well. He was a double-double machine, putting up double-figures in points and rebounds in 48 of 63 games.

On a team loaded with 3-point shooters, Capela is the guy who thrives doing the dirty work on the inside.

“I’m just doing my job: erasing mistakes at rim, setting pick and rolls, finishing hard at the rim, being vocal on the defensive end,” Capela said. “I want to let everyone know I’m the backbone at rim, then just do it over and over again. It’s as simple as that.”

Capela played a huge role in Atlanta’s five-game victory over the favored New York Knicks in the opening round of the playoffs.

Standing up to one of the league’s most physical teams, he helped to shut down All-Star Julius Randle and went toe-to-toe with Taj Gibson and Nerlens Noel in the lane.

In the Game 5 victory that finished off the series at Madison Square Garden, Young was the one taking the bow but Capela deserved a curtain call of his own. He finished with 15 rebounds — more than Gibson and Noel combined.

“He was really physical in the paint,” McMillan said. “He held his ground against Noel and Gibson. That was difference in the game. We needed to win the hustle game.”

Before the final game, Capela bluntly predicted that Atlanta would send the Knicks on vacation. He also accused New York of bullying tactics that weren’t working, culminating in Randle’s flagrant foul in the closing minutes of a Hawks blowout victory in Game 4.

“They were trying to play tough, push our guys around, talk” trash, Capela said. “But we can do that, too. We showed them ... that we can push guys around, too. We can talk (trash) as well. What are you going to do about it? We can do it and get the win, too.”

McMillan wasn’t very thrilled with Capela’s blunt chatter, but his teammates loved it.

“That was some big talk on his end, to go out and put his time on the line in a sense,” forward John Collins said. “But we had his back. We knew he would come out and give it 100%. We really had no issues with it. We were able to do what he said. Send ‘em on vacation. Send ’em home.”

Now, it’s on to the second round against the top-seeded 76ers. Game 1 is Sunday (Monday, Manila time) in Philadelphia.

The Hawks are again the underdogs.

“We just want see where we can go,” he said. “Every game is really exciting with this team. We have a great mentality. We’re playing hard on defense. We’re making sure we’re doing the job the right way.

“With that mentality and the potential we have, the sky’s the limit for us.”