Chris Paul delivers down the stretch to lift Suns over Spurs

PHOENIX — Chris Paul's learned to pace himself over the years, paying attention to his 36-year-old body as he navigates the 30-35 minutes per night he usually spends on the floor for the Phoenix Suns.

There's a disclaimer, though: That pacing doesn't apply to the final minutes.

"The fourth quarter," Paul said. "That's when the game gets exciting."

Paul had a few clutch plays late in the fourth and finished with 21 points and 10 assists, Jae Crowder added a season-high 19 points and the Suns held off the San Antonio Spurs for a 108-104 win on Monday night (Sunday, Manila time).

Phoenix was the first team to hit 20 wins this season, though the Golden State Warriors joined them about an hour later after a 126-95 win against Orlando. The Suns and Warriors have played twice this season with each team winning on their home floor.

Paul's first game-changing play on Monday came defensively with a stellar steal. He poked the ball away from a driving Dejounte Murray, who was about to score on a fast break with 1:30 left that would have cut the Phoenix lead to one point. Instead, the ball deflected off Murray and out of bounds.

"He's real crafty," Suns forward Cam Johnson said. "There's a reason he's one of the all-time steals leader. ... He's smart, quick with his hands and when you watch him do it, it's pretty impressive."

The 11-time All-Star added a 16-foot jumper about a minute later while being fouled. Paul converted the free throw for a three-point play and a 108-102 lead.

Phoenix was playing its first game since having its franchise-record 18-game winning streak snapped against Golden State on Friday. The Suns didn't appear fazed by the setback and won for the 19th time in 20 games dating to Oct. 27.

"We still fought and made it a game," McDermott said. "We had a chance to win against one of the best teams in the league. Unfortunately, we lost, but I think we will learn a lot from this one."

The Suns pushed ahead by 16 points late in the third quarter, but settled for a 79-70 lead going into the fourth. The Spurs chipped away at the lead until Doug McDermott made a 3-pointer with 6:10 left that tied it at 88-all.

It stayed tight from that point forward, though the Suns never trailed. Johnson — who had 13 points — made a corner 3-pointer with 1:10 left that pushed Phoenix ahead 103-97. JaVale McGee also had 13 points off the bench.

The Suns trailed for the majority of the first half, but used a late push to take a 51-48 lead at halftime. Phoenix had 32 points in the paint before the break, led by 10 each from Deandre Ayton and McGee. Jakob Poeltl had 10 points and six rebounds for the Spurs. 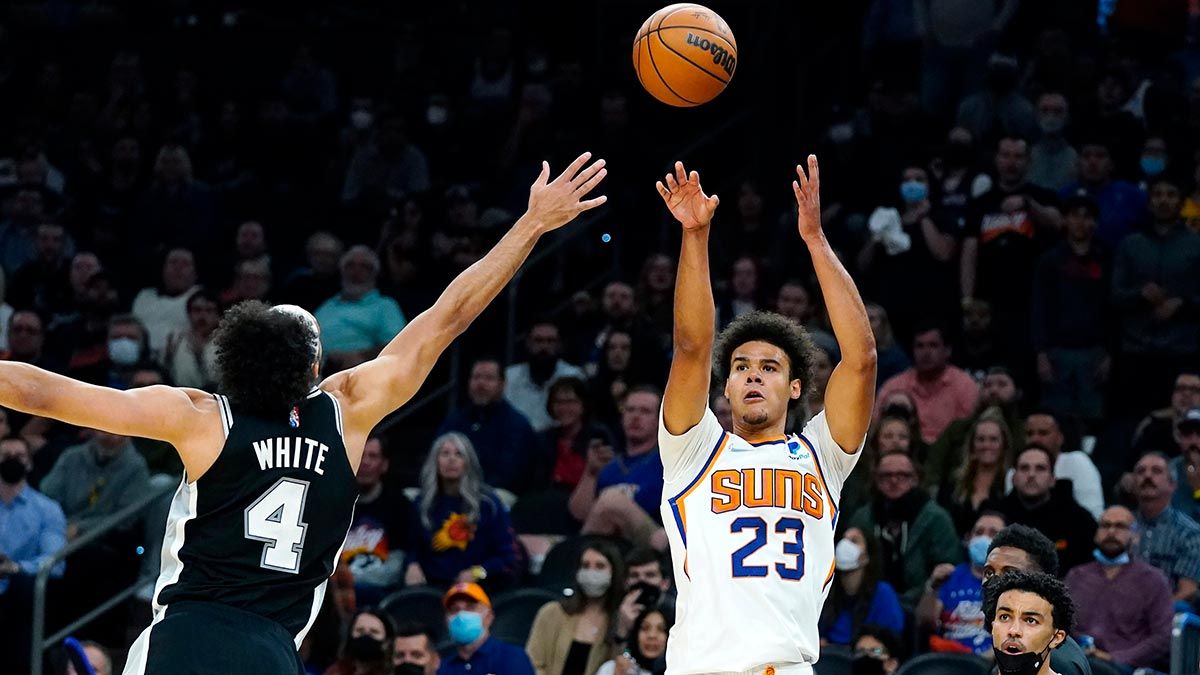 Cameron Johnson has 13 points and five other Suns score in double figures.

Spurs: G Devin Vassell (right quad) didn't play. ... Backup F Drew Eubanks didn't play in the first half but had eight solid minutes in the second half. He had four points and four rebounds. ... Doug McDermott and Poeltl both scored 14 points. McDermott had 12 of his 14 points in the fourth.

Spurs: Begin a five-game homestand against the Knicks on Tuesday.

Suns: Host the Celtics on Friday.