CP3 shrugs off injury scare: ‘I'm glad to be back helping the team’

PHOENIX — In the opening minutes of Monday night's game, Chris Paul was bumped on his ailing right shoulder and grimaced for a second. His movements were a little tentative, his shots didn't look quite right.

Then — seemingly almost out of nowhere — the "Point God" was back.

One mid-range jumper fell and then another. A short floater found the net and then a 3-pointer splashed home as the crowd roared. The 11-time All-Star looked like his usual self, the rest of the Suns followed suit and Phoenix rallied for a 122-105 win over the Denver Nuggets in Game 1 of the Western Conference semifinals.

"It was fun to get out there and be involved," Paul said. "That last series – that was tough – but I'm glad to be back helping the team."

Paul and his rejuvenated right shoulder finished with 21 points and 11 assists while Mikal Bridges added a team-high 23 points on 8 of 12 shooting, including 4 of 8 from behind the arc.

The Suns trailed for most of the first half and 70-60 early in the third quarter but rallied to take the lead by late in the third. Devin Booker made a 3-pointer and Bridges added a driving layup for a 79-72 advantage.

They pushed the lead to 88-79 going into the fourth. Paul — who played with the hurt shooting shoulder through most of the first round matchup against the Lakers — made back-to-back mid-range jumpers to put the Suns up 94-79 with 10:25 left.

"We felt that energy," Booker said. "We felt the passion. He just made plays."

The flurry came much to the delight of the sellout crowd of 16,319, who anxiously watched the point guard's every move.

"This crowd is crazy," Paul said. "There's nothing like it. This is why we fought so hard during the regular season to get home court advantage."

Paul's buckets were the final exclamation points on a 34-9 run that helped Phoenix take control. Deandre Ayton finished with 20 points and 10 rebounds while Booker added 21 points.

It was surprising that the game didn't come down to the final minutes. The three regular-season meetings were all extremely close: One was decided by three points in regulation, another was settled in overtime and the other went to double overtime.

"We did some good things but obviously we were unable to sustain it for 48 minutes," Denver coach Michael Malone said. "We all collectively have to better, a lot more physical, a lot more disciplined if we want to win in Game Two."

Nuggets forward Jamychal Green was disappointed that the Suns were more physical during the decisive minutes.

Nikola Jokic led the Nuggets with 22 points but went cold while the Suns made their second half run. Aaron Gordon added 18 points while Michael Porter Jr. had 15.

Jokic took some of the blame, saying he should have been more aggressive during the second half. The MVP candidate shot 10 of 23 from the field.

"When things aren't going our way, we need to be more decisive," Jokic said. "We need to know what we are doing as a group."

The big man matchup between Jokic and Ayton delivered in the first quarter as the two teams fought to a 28-all tie. Ayton threw down a thunderous dunk over Porter while Jokic used his strength and positioning to make five of six shots.

Denver led 58-57 at halftime. Jokic had 15 points and six rebounds before the break while Booker and Ayton countered with 11 points each for the Suns.

Paul became just the third player 36 years or older who had at least 20 points and 10 assists in a playoff game, according to ESPN Stats & Info. Steve Nash and John Stockton were the others.

Paul averaged just 9.2 points per game against the Lakers in the first round, partly because of the sore shoulder he hurt in the first half of Game 1. 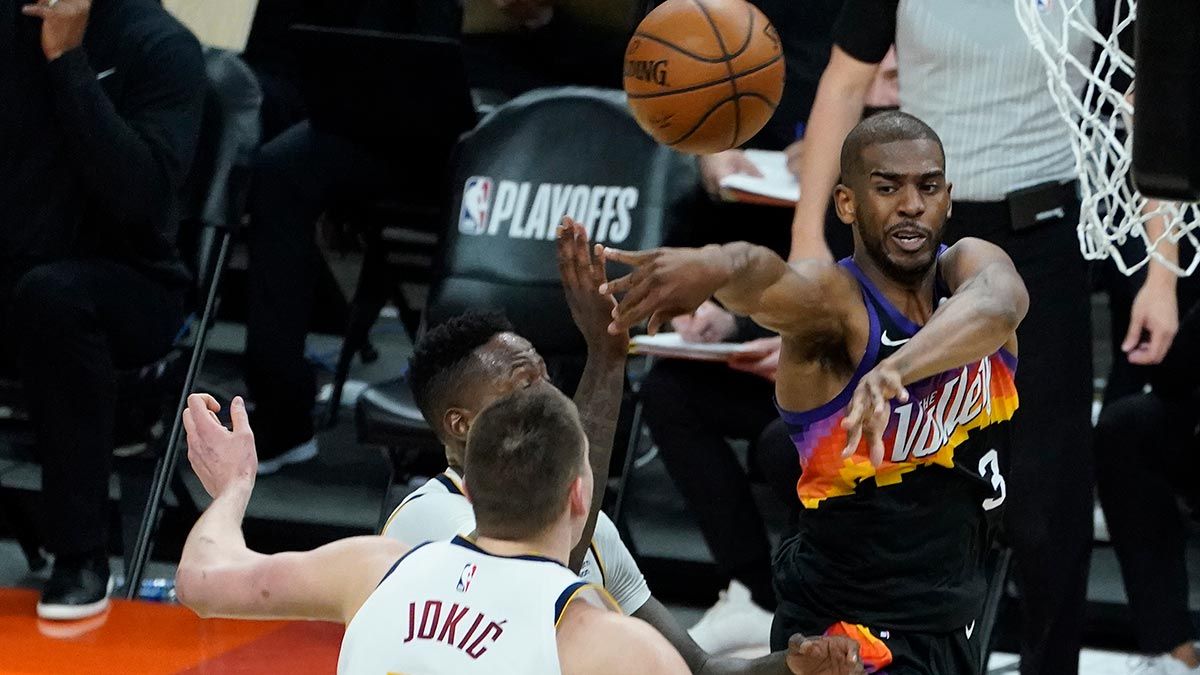 Williams wasn't upset to finish second, especially since the winner was Thibodeau. The two worked together when they were assistant coaches with USA basketball.

"It's pretty cool to watch someone I've worked with win an award like that," Williams said.

Celebrity chef Guy Fieri was among the fans sitting courtside at Phoenix Suns Arena. The band Jimmy Eat World, which was formed in Mesa, Arizona, in the 1990s and had a string of hits in the 2000s, performed at halftime.

Fittingly, they played one of their biggest songs "The Middle."

Suns: Forward Abdel Nader (right knee surgery) didn't play. ... Suns forward Torrey Craig had a good performance against his former team, scoring nine points and grabbing seven rebounds in 15 minutes. ... The Suns shot 64% from the field in the second half, including 46% from 3-point range.