BOSTON — The Miami Heat left Jayson Tatum lying on the court with a pain in his neck in the closing minutes of Game Three.

The Celtics All-Star did his part to make sure the Heat were hurting after Game Four.

Tatum scored 31 points and Boston took its turn pounding Miami early, jumping out to a 26-4 lead and cruising to a 102-82 victory that evened the Eastern Conference finals at two games apiece.

"Obviously, we knew how important this game was," Tatum said. "Everybody just had to come up with a different sense of urgency."

Miami missed 15 of its first 16 shots as this bizarre series produced another game that was all but over after 12 minutes. The Heat led 39-18 after the first quarter of Game 3.

"Just got to muster that same energy when we came off a win as well as a loss," Udoka said. "This is a three-game series now. Can't always just flip the mindset when we come off a loss and get a little desperate."

Game Five is on Wednesday in Miami (Thursday, Manila time).

"We just wanted to up the effort all-around," Williams said.

The Celtics led by 27 points in the second quarter and stretched their advantage to 32 in the third. Each game in this series has featured a lead of at least 20 points, and none has been close down the stretch.

"They came out and jumped us," Heat coach Erik Spoelstra said. "We're not making any excuses. They outplayed us tonight for sure. We never could get any kind of grip on the game."

And the Celtics stymied the Heat without Defensive Player of the Year Marcus Smart, who sat with a sprained right ankle he suffered in the second half of Game Three. 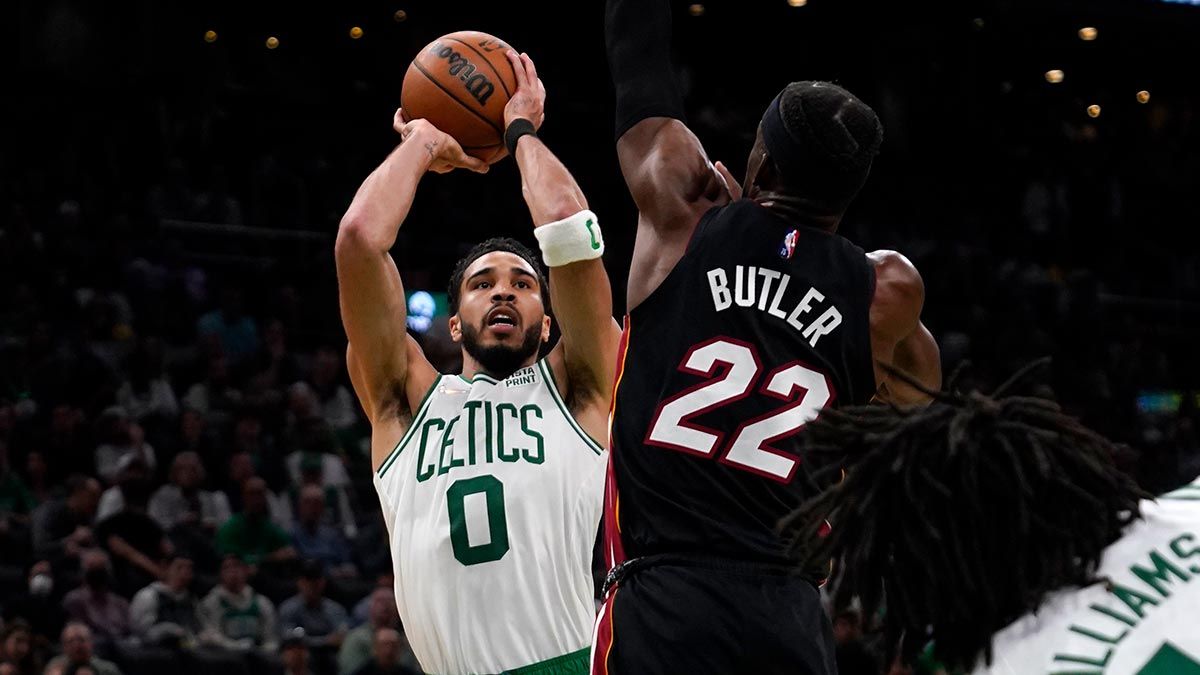 Jayson Tatum and the Celtics even the East Finals series with the Heat.

The Heat were without Tyler Herro, who suffered a groin injury late in Game Three.

Butler was in the starting lineup after missing the second half of Game Three with swelling in his right knee. Lowry (strained left hamstring), Strus (strained hamstring) and Tucker (left knee irritation) all tested their injuries pregame before being cleared to go.

"It's a part of playoffs. You learn to adapt," Adebayo said. "Guys being out, guys playing half, guys playing 20 minutes in the game, just depends. You've just got to find a way to win."

Boston's Williams returned after missing a game with soreness in his surgically repaired left knee.

Even with their banged-up roster, the Celtics enjoyed their fastest start of the series. Starting in place of Smart, White scored the game's first seven points as Boston took an 8-0 lead.

It quickly grew to 18-1, with Miami misfiring on its first 14 shots. The Heat didn't get their first points until Adebayo's free throw at the 7:56 mark. Miami made its first field goal at 3:22, a 3-pointer by Oladipo, and finished the quarter 3 for 20.

Heat: Shot 33% (30 of 90). ... Finished with 64 bench points. ... Miami had one point in the first eight minutes, the lowest total by any team in a playoff game in the last quarter-century, according to ESPN Stats & Info.

Celtics: Outrebounded Miami 20-8 in the first quarter. ... Several current and former New England Patriots were in the crowd, including Devin and Jason McCourty, Malcolm Butler and Damien Harris.

Per ESPN Stats & Info, the 18 points scored by Miami's starters is the lowest total by a starting five in a playoff game since starters were first tracked beginning in 1970-71.

After finishing with 23 turnovers in Game 3, the Celtics had nine in Game 4. They improved to 10-2 this postseason when they have 15 or fewer turnovers. Boston is 0-3 when it has 16 or more giveaways.