Sloppy ball handling once again proved costly to the Celtics, whose propensity for committing turnovers has been a recurring problem during this playoff run. Boston gave it away 19 times in a 107-88 loss to the Golden State Warriors in Game Two of the NBA Finals on Sunday night (Monday, Manila time) to tie the series at one game apiece.

Analysis: It took just 11 seconds for Dray to set the tone in Game Two

"It's just kind of as simple as we've just got to take care of the ball," star Jayson Tatum said. "We've done it, and we're a really good team when we take care of the ball. But we have those lapses where we, snowball effect, we pile on turnovers and dig ourselves into a hole."

The Celtics managed to shoot their way out of their turnover woes in the first half of Game Two by making 10 of 19 3-pointers to stay close to the Warriors.

But when the shots stopped falling in the third quarter, the turnovers were too much to overcome, sending the Celtics home disappointed despite a Game One victory.

"For whatever reason, the previous series that happened to us. On our wins, we didn't turn it over; on our losses, we turned it over excessively," forward Al Horford said. "It's something that we'll have to look at this game individually and just see how we can be better. I know we can prevent a lot of those, and in order for us to be in a better chance of winning, we have to cut those down."

The Celtics have committed an average of nearly four more turnovers per game, leading to nine more points per game for the opponent in their losses compared to their wins.

Boston is 1-5 this postseason when committing at least 16 turnovers, compared to 12-2 when giving it up 15 times or fewer.

The problems started early Sunday night with Boston giving it away seven times in the first quarter, leading to 13 points for Golden State to offset a fast shooting start by the Celtics.

There were four more turnovers in the second quarter and then five in the third that led to 11 more points as Golden State outscored Boston 35-14 in the period. The Celtics made one fewer basket than turnovers but coach Ime Udoka pointed to the first-half sloppiness as the major issue.

"We had our opportunities," Udoka said. "Came out, jumped out up nine early. Then turnovers started happening. Let them back in the game. Then the offense wasn't as crisp with the ball movement and passing. Like I said, 11 of our turnovers were live ball turnovers, nine of them out of steals. So got to be better in that category."

There were plenty of culprits, with Marcus Smart committing five turnovers, Tatum four and Derrick White three. Horford and Jaylen Brown added two apiece as Udoka said his players were too often looking for fouls instead of being strong with the ball.

"For us, that was a little disappointing, to give up 33 points off of 19 turnovers," he said. "That's kind of been a constant theme in the playoffs. When that happens, we're in trouble." 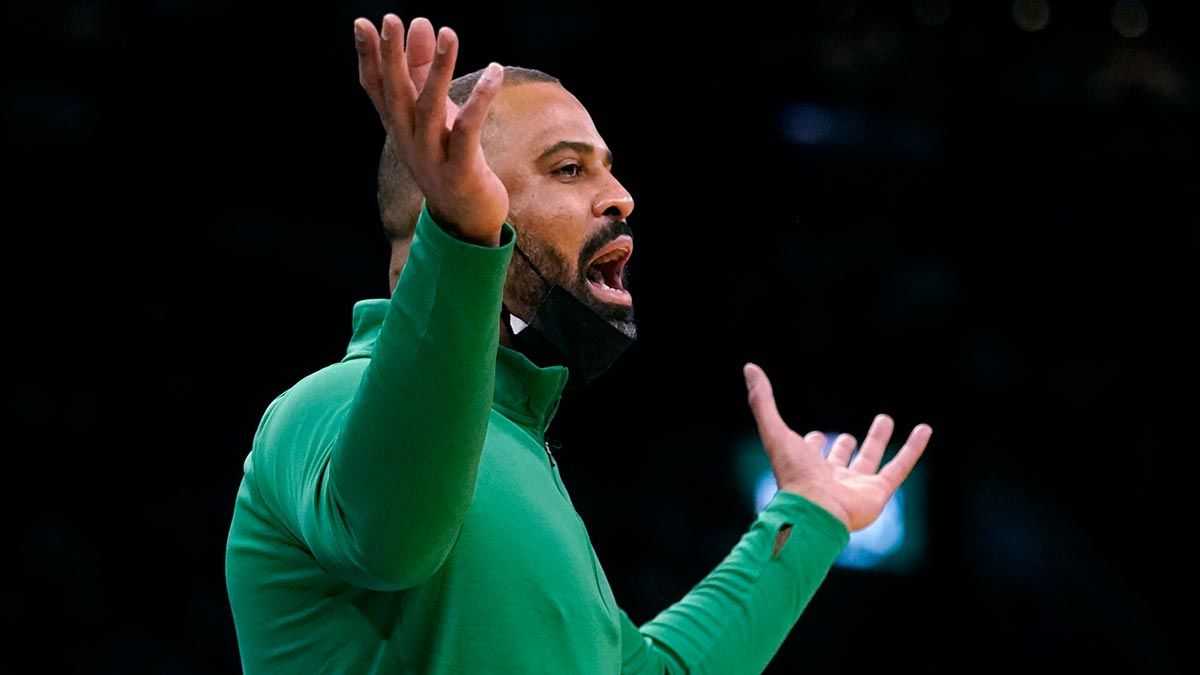 Ime Udoka said his players were too often looking for fouls instead of being strong with the ball.

Turnovers haven't been the only recurring problem for Boston during these playoffs as the Celtics also have struggled to protect home court.

They overcame losses in Games One and Five in the second round against the Bucks by winning Game Six in Milwaukee to stave off elimination before taking Game Seven back at home.

Then they lost twice at home to the Heat in the Eastern Conference finals, including a potential Game SIx clincher that forced them to win Game Seven at Miami to advance.

Now they face a Warriors team that has set an NBA record by winning at least one road game in all 26 playoff series during the Stephen Curry era.

"Just playing with a sense of urgency, I think," Tatum said when asked about the key to being better at home. "Human nature plays a part when you go on the road. Obviously it's a tough environment. I feel like recently we've kind of relaxed at home. Whether we thought because we had home-court advantage, we came out a little more relaxed."