Cavaliers still believe Kevin Love is worth keeping around

CLEVELAND — As the Cavaliers' slow, stuttering rebuild continues around a "core four" of young players, the team still views Kevin Love as an important piece.

One worth keeping around. At least, for now.

On Friday (Saturday, Manila time), general manager Koby Altman spoke to the media for the first time since the Cavs completed an injury-marred season by going 22-50 and failing to compete for a playoff spot during a year in which Love went from being a major contributor to a distraction.

The five-time All-Star played in just 25 games because of a severe calf injury. All that will be remembered from his forgettable season is an on-court lapse against Toronto when he lost his composure and smacked the ball away in frustration only to have the Raptors grab it and score.

It's a regrettable moment that has stained an otherwise clean resume.

Love's mini-tantrum was also a microcosm of a frustrating season for the Cavs, who used 30 different starting lineups and lost 300 total games to injuries. There was also plenty of self-inflicted drama, which included Love's meltdown in Florida, Kevin Porter Jr.'s surprising trade to Houston and the team buying out All-Star center Andre Drummond's contract.

Altman said Love was "internally reprimanded" for his on-court behavior in April. But his actions caused serious damage to Love's reputation with fans and possibly affected relationships with teammates and coaches.

Love publicly apologized for his outburst, saying it was out of character. And while fans may have had a harder time accepting Love's remorse — and stomaching his $30 million per season contract — Altman insists it hasn't caused a rift inside the Cavaliers.

Altman said Love gives the Cavs, who at one point were starting four players under 22, a needed mentor for younger players. He may have some quirks, but Love's value stretches far beyond his ability to shoot and rebound.

"Jarrett Allen loves Kevin and I asked him why and he said, 'Off the court he provides leadership. He provides a sense of humility. He's funny,'" Altman said. "And he's been here a long time; he's won a championship with us, so he has a lot of equity here. I love talking to him, I love being around him. He has his moments, but he's ours and he's uniquely Kevin Love."

Altman said Love is headed into a "significant" summer. He needs to get physically healthier and mentally tougher to handle what's ahead.

Although the Cavs played few meaningful games this season, Altman believes the team is close to a breakthrough behind guards Darius Garland and Collin Sexton, forward Isaac Okoro and Allen, whose arrival necessitated the team to move on from Drummond.

The Cavs will add another talented player high in the draft, and there are plans to sign veteran free agents this summer.

But the young guys need someone to show them the way, and Altman feels that's a perfect role for Love.

"We want him to be here," Atlman said. "We signed him to an extension (four years, $120 million in 2019) for that reason, to be here when we want to make that next step. And so we're going to hopefully rely on him heavily next year after a significant summer." 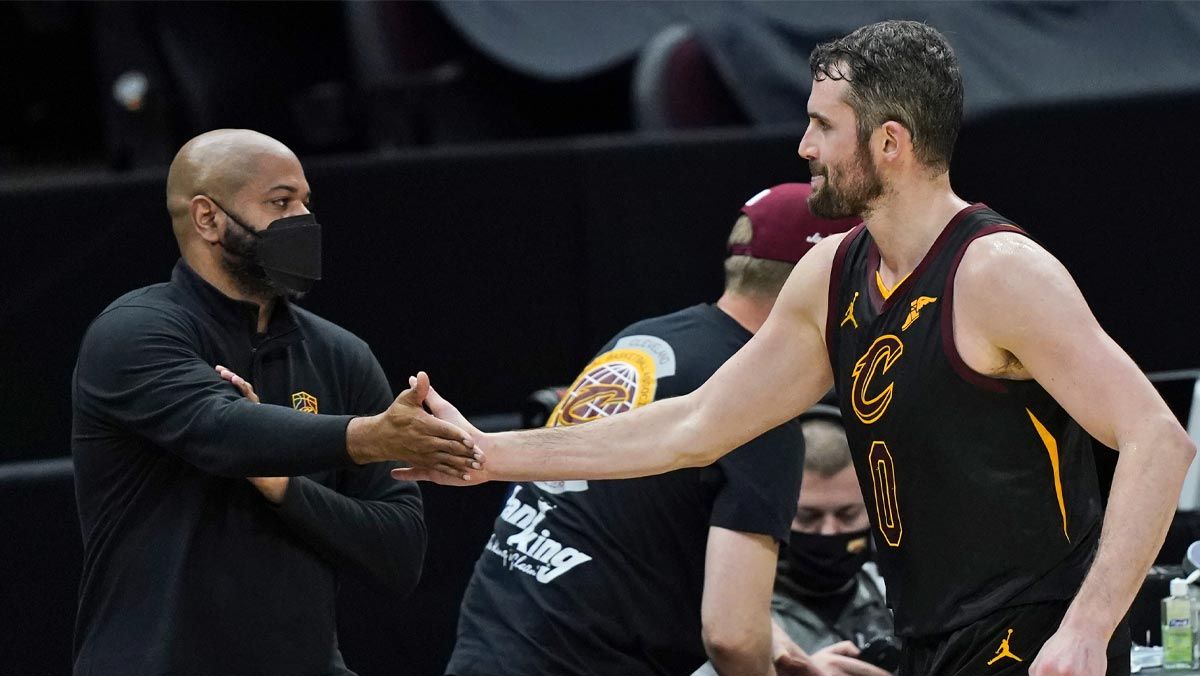 Altman touched on several other items during his Zoom conference:

— The GM said he's had candid conversations with owner Dan Gilbert, who feels good about the team's positioning. Altman said he's never had any direct talks with Gilbert about his own situation but feels comfortable that he's done a good job.

Altman said Gilbert, who has had health issues following stroke, remains "very engaged" with the team.

— Altman said the Porter trade came after the Cavs exhausted themselves in trying to work with the talented and troubled former first-round pick. Porter had some legal issues while in Cleveland his stay ended shortly after he became enraged when the team moved his locker and confronted Altman.

"It's impossible to bat a thousand percent when you're doing it this way," Altman said. "The hard part is this thing's fragile, it's a fragile thing and the culture that we're trying to create we have to have a level of integrity that we're trying to live by and grow that young talent to hopefully win. That's for everybody. I think the change of scenery was needed from both parties."