CLEVELAND — Joel Embiid did plenty of damage on his own. The Cavaliers, though, felt the big man got some unwarranted help.

Cleveland coach J.B. Bickerstaff was highly critical of the officiating after Embiid scored 44 points — and made 20 trips to the free throw line — in Philadelphia's 112-108 win over the Cavs on Sunday night (Monday, Manila time).

"That game was taken from us," Bickerstaff said. "We deserved to win it."

Embiid added 17 rebounds and James Harden had 21 points, 10 rebounds and 10 assists in his second triple-double with Philadelphia as the 76ers locked up a playoff spot.

Embiid was questionable coming into the game with a sore ankle. But not only did the 7-footer play, Embiid dominated down the stretch, scoring 12 points in a key sequence of the fourth quarter.

He also made 17 free throws, added five blocks, made three 3-pointers and had three assists in 38 minutes of another MVP resume builder.

Embiid won't allow himself to get caught up in the debate.

"If it happens, great," he said of winning his first MVP. "If it doesn't, I don't know what I have to do. I'll feel like they hate me. I feel like the standard for guys in Philly or for me is different than everyone else."

Bickerstaff wasn't taking anything away from Embiid or Harden, but he was upset with what he thought was a major discrepancy in fouls. Cleveland was called for 28 to Philadelphia's 19 in a physical game with playoff-level intensity.

"The one thing you can't defend is the free throw line and that's absurd," Bickerstaff said, referring to the Sixers' 42 attempted foul shots. "Our guys deserved way better than they got tonight.

"They're great players and they understand how to play through the rules," he said of Philly's All-Stars. "They know how to manipulate the rules. This is no knock or disrespect to those guys. But the game has to be consistent on both ends of the floor. We were searching for that consistency and we never found it." 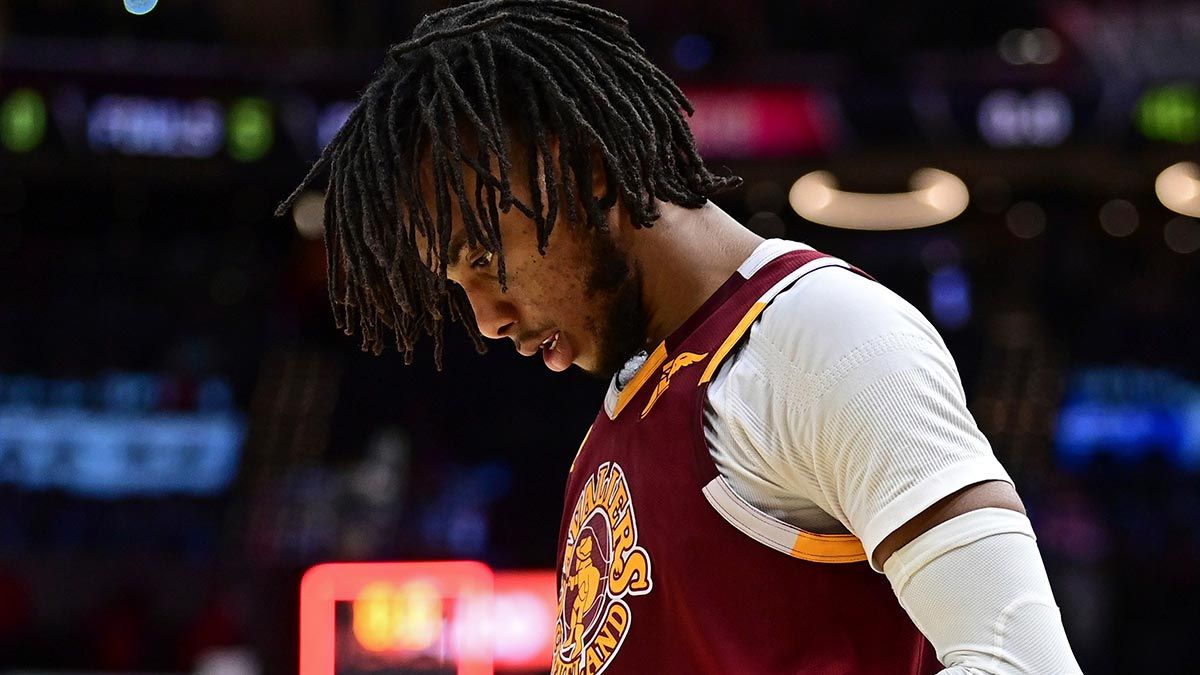 Darius Garland and the Cavs are running seventh in the Eastern Conference.

Darius Garland scored 23 and Caris LeVert and Lamar Stevens had 18 apiece for the Cavs, who played without injured 7-footers Evan Mobley and Jarrett Allen but battled one of the East's top teams to the finish.

Cleveland, which is trying to hang onto the No. 7 play-in spot, was within 107-106 when Bickerstaff felt Garland drew contact from Embiid while missing an off-balance layup with 15.2 seconds left.

"Darius was fouled," Bickerstaff said. "He did his job and got to a spot and got fouled. No whistle."

But Kevin Love made a careless inbounds pass that was stolen by Matisse Thybulle, who then made a pass from a sitting position to a streaking Tobais Harris for a game-sealing dunk with 7.2 seconds left.

Nothing came easy on offense for the Sixers, who made 21 3-pointers and scored a season-high 144 in a win over Charlotte on Saturday.

But Embiid bailed his teammates out with the kind of performance that has come to be expected of him, the kind made by an MVP.

"I get to witness his greatness every night," Harden said. "Obviously, his offensive numbers tonight are self-explanatory. Defensively, he was very active blocking shots, changing shots and clogging the paint up was key."

76ers: Finished 35 of 42 at the line. ... F Paul Millsap, a 15-year veteran, has only played eight minutes in the last five games. Millsap has only appeared in four games since DeAndre Jordan was signed on March 3. … Philadelphia plays three of its final four regular-season games on the road. ... Rivers had high praise for Cavs guard Rajon Rondo, who played for him in Boston. "The brightest player I've ever been around," Rivers said. "He kept us (coaches) on our toes."

Cavaliers: Rondo (ankle) played for the first time since March 12. ... Allen missed his 15th straight game and Mobley sat his fourth in a row. Bickerstaff did not say when — or if — either will be back before the regular season ends in a week.

Rivers has been campaigning for Embiid to win MVP honors this season among a group of worthy candidates. For the Sixers coach, Embiid's passing, defense and leadership are overlooked parts of his well-rounded game.

"I know he's my guy, obviously," Rivers said pregame. "He has just has done so many things."

Rivers credits Embiid for pulling the Sixers through "the Ben Simmons saga."

"He was our second-best player at the time and was out, and at the All-Star break when we made the trade, we were a game out of first place in the East," Rivers said. "There's a lot to be said about that."

76ers: Play at Indiana on Tuesday.