LOS ANGELES — Carmelo Anthony got the game ball after the Los Angeles Lakers' first victory of the season.

Anthony had just scored a team-high 28 points, moving into ninth place on the NBA's career scoring list, and was asked to make a speech. He said he was too tired.

There was plenty of drama in the final minute as Morant was fouled on a 3-point attempt by Kent Bazemore with 2.5 seconds left and Memphis trailing by three. Morant had a chance to tie the game, but missed the third and final free throw and the Lakers escaped with the win.

The Lakers snapped a season-opening two-game losing streak. The Grizzlies lost for the first time after consecutive wins to open the season.

Morant shot 13 of 21 from the field and made a career-best five 3-pointers. He added 10 assists. By halftime, Morant had 17 points, including four 3-pointers.

"I really don't care about what I've done tonight," Morant said. "I missed a free throw to tie it. That's pretty much the only thing on my mind."

Davis blocked a Morant layup attempt with 50 seconds left and that appeared to seal it for the Lakers. The teams exchanged free three throws, then Bazemore fouled Morant. But the Grizzlies failed to complete the comeback.

The Lakers played for the first time since Davis and Dwight Howard had a physical confrontation on the bench during the game against Phoenix. The pair proclaimed that disagreement was over by halftime. 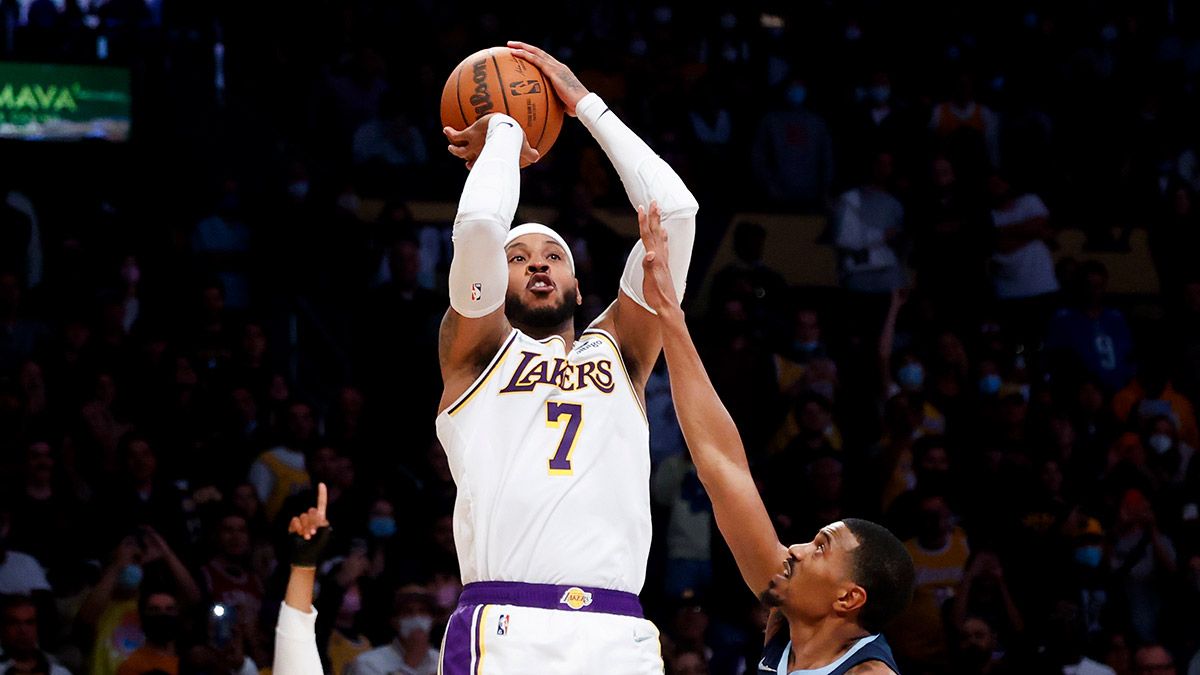 Carmelo Anthony leads the Lakers in scoring with 28 points.

In a scary moment for the Lakers, James fell to the court and held his right leg in some pain in the third quarter after Desmond Bane fell into his leg. James was looked at by trainers and was down for a brief time. He re-tied his shoes, popped back up, jumped up and down a few times and stayed in the game. About a minute later, he had a big block.

The Grizzlies led by as many as 10 points in the first quarter. The Lakers were dominating inside and used their height advantage to take a 62-56 halftime lead.

The Lakers had a lengthy film session on Saturday to work out defensive problems, among other things. A lot of good came from it, according to Frank Vogel.

"I just think there's a feeling about our group that we're OK," Vogel said. "We have a lot of work to do, and we're willing to put in the work. We feel good about our group. We want to start 2-0. We didn't. But the mindset is to get the next game and still understand there will be some patience required, but we feel really good about our group."

Grizzlies: Guard De'Anthony Milton scored 10 points in 5:10 in the first quarter. … The Grizzlies played back-to-back nights and won at Staples Center a day earlier, beating the Clippers 120-114. They showed little signs of fatigue in the fourth quarter.

Lakers: Los Angeles played a tribute video of Anthony on the JumboTron in the fourth quarter to honor his move up the NBA's scoring list. Fans broke out in a chant of "Melo!"

Memphis: At Portland on Wednesday for the third game of a four-game trip.