BOSTON — Bam Adebayo scored 31 points with 10 rebounds for the Miami Heat, who blew a 25-point, first-half lead and lost Jimmy Butler to a knee injury but held on to beat the Boston Celtics, 109-103, in Game Three of the Eastern Conference finals on Saturday night (Sunday, Manila time).

See After getting past Ayton, Mavs try to solve a new big problem in Kevon Looney

Max Strus answered with a 3-pointer and then Adebayo bounced off defender Al Horford and made a basket at the shot clock buzzer to give Miami a six-point cushion it held to take a 2-1 lead in the best-of-seven series.

In a game that saw Butler and Boston's Jayson Tatum and Marcus Smart leave with injuries — though both Celtics returned — Kyle Lowry came back from a four-game absence and scored 11 with six assists for the Heat. P.J. Tucker — like Lowry a game-time decision — scored 17 for the Heat.

Horford scored 20 points with 14 rebounds, and Smart scored 16. Tatum had 10 points on 3-for-14 shooting; he also had six turnovers and Brown committed seven of Boston's 24 turnovers — a 2022 playoff high.

After losing Game Two at home by 25 points to cede home-court advantage to the Celtics, the Heat opened a 62-37 lead with under three minutes left in the second quarter and then watched Boston score the last 10 points of the half to claw its way back into the game.

Things got worse for the Heat when they announced at halftime that Butler, who scored 41 in the series opener, would not return with right knee inflammation.

Miami still led by 15, 87-72, after three, and made it a 17-point game on Adebayo's basket to start the fourth. But the Celtics ran off the next nine points to get within single digits for the first time since the first three minutes of the game. Trailing 93-80, the Celtics scored 12 straight points – 10 by Brown – to make it a one-point game with 2:40 left. 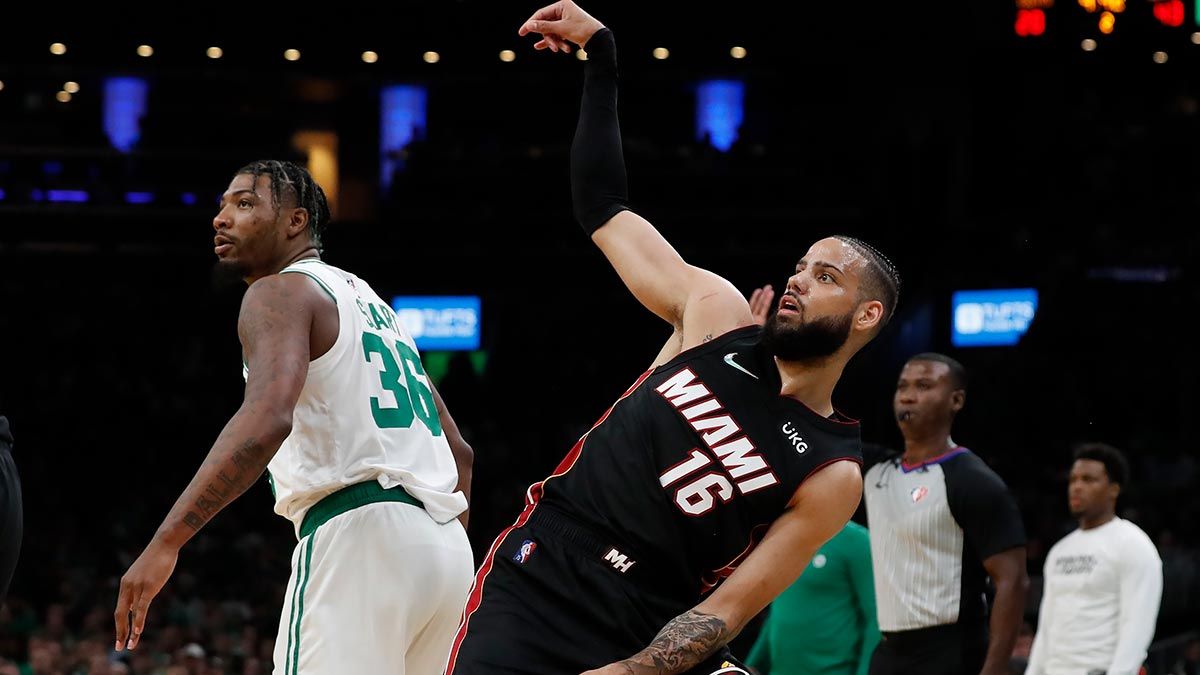 Caleb Martin and the Heat hold off the Celtics.

Boston opened the second with a basket to make it a 13-point game, but the building went silent when Smart, the Defensive Player of the Year, went down in a collision with Lowry while going for a loose ball and needed to be helped to the locker room.

Smart returned just five minutes later, drawing a huge cheer when the scoreboard showed him walking down the tunnel back toward the court. He checked back in with seven minutes left in the third and hit a 3-pointer that made it a 10-point game, 72-62, and forced the Heat to call timeout.

The situation was repeated when Tatum went down in obvious pain with five minutes left in the fourth. He went straight to the locker room, clutching his right side, but also returned to the cheers of the crowd.

Lowry missed eight of the Heat's previous 10 games with a right hamstring strain, last playing in Game 4 of Miami's second-round series with Philadelphia. Tucker had a sore left knee but was also in the starting lineup.

The Celtics played without center Robert Williams III, who missed three games in the second round against Milwaukee with soreness and a bone bruise in his surgically repaired left knee. Daniel Theis started in his place. Derrick White returned after missing Game 2 to be at the birth of his first child.

The Celtics' 24 turnovers led to 33 Miami points. The Heat had nine turnovers that led to nine Celtics points. ... Miami's bench outscored Boston's 26-16. ... The Heat shot 64% in the first quarter, but finished at 46.7%. ... Penn State coach and former Celtics assistant Micah Shrewsberry and Providence College coach Ed Cooley were both in attendance.