MINNEAPOLIS — More than a year after acquiring D'Angelo Russell as the pick-and-roll initiator for pal Karl-Anthony Towns, the Minnesota Timberwolves finally closed this season with a full month of games that both halves of their star pairing were available to play in.

Their biggest takeaway from the longest stretch of time Towns and Russell have had together on the floor was that they're actually only two parts of what has quickly become a formidable trio.

Anthony Edwards filled his audition for the NBA Rookie of the Year award with high-flying dunks, timely 3-pointers and wide smiles, leaving the Timberwolves with no regret about making him the first overall pick in the draft. Towns and Russell will have to make room.

"They help me tremendously, because they can space the floor, so it makes it easier to get downhill," said Edwards, who led all first-year players in scoring at 19.3 points per game at age 19. "Because I'm so dynamic going downhill, it opens the '3' up for them. Like, I can just kick it, and they're wide open. I think we've got a pretty good thing going here."

The Timberwolves think so, too, even after yet another tumultuous season and the 16th time missing the playoffs in the last 17 years.

Towns had wrist trouble and then COVID-19, a particularly painful time for him considering the disease led to his mother's death last year. Russell had knee surgery and was absent even longer than Towns. President of basketball operations Gersson Rosas fired head coach Ryan Saunders two months into the season, replacing him with Chris Finch.

Through it all, Edwards played in every game, the only one in Minnesota to do so in 2020-21, while minimizing his weaknesses with an infectious energy and confidence that fueled clear improvement over the course of his debut in the league. Each of his eight highest scoring totals — ranging from 29 to 42 points — came during the second half of the schedule.

Towns played in 50 games and finished 19th in the league with an average of 24.8 points per game. His shooting percentage (48.6%) was a career low. His dislocated left wrist played a part in that, but he said he wouldn't need offseason surgery.

"I was impressed that I was even able to have that while just playing with one hand most of the year, and it's hard to only finish with right hands," Towns said. 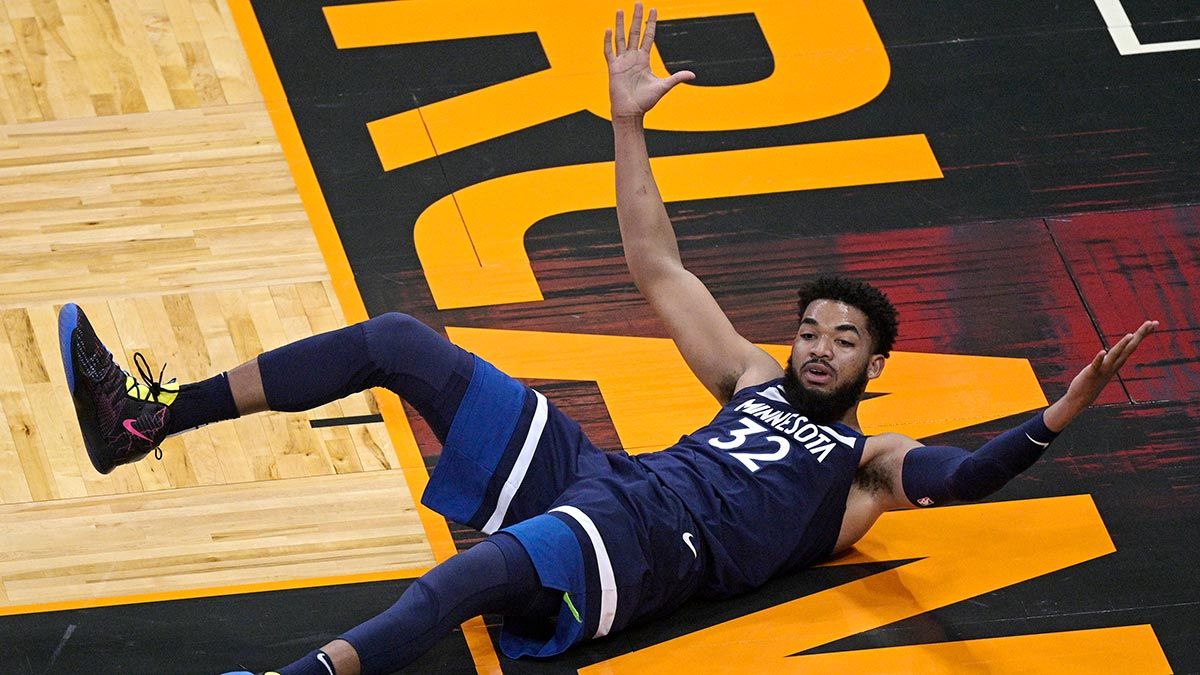 Towns, who has three more seasons on his maximum contract, has seen the Timberwolves post their worst two winning percentages of his six-year career in the last two seasons. He's never even hinted at dissatisfaction with the Twin Cities market or the Timberwolves organization, though, going out of his way on multiple occasions over the last two years to express confidence in the direction of the team. Another one of those came Monday during his season-ending interview with reporters over video conference.

"I just really am happy that I'm still able to be here playing for this amazing city and state and be able to stay here and effect change in the community," Towns said, "and I'm just so happy that I've been given a chance to play here in Minnesota."

Though Malik Beasley's legal trouble and hamstring injury limited him to 37 games, the Timberwolves are sold on him as a shooting guard, perhaps as a sixth man next season. Jaden McDaniels showed plenty of potential in his first season. Beyond the top five players, though, the rest of the roster remains up for grabs. Power forward is the most critical area to upgrade.

"It could be more of a physical rim-protecting type guy or an aggressive multi-skilled switch defender," Finch said. "We'll see what's out there. I have every confidence in Gersson and his crew to bring us the best available guy, if that's what we decide to do."

The Timberwolves had the worst record in the league two months ago but passed five teams (Houston, Detroit, Orlando, Cleveland and Oklahoma City) and now have a 27.6% chance of landing one of the first three selections in the draft. If they don't get lucky in the lottery, they'll have to give up their first-rounder — which is top-three protected — to the Golden State Warriors to complete the trade they made last year for Russell.