SACRAMENTO — Buddy Hield scored 18 of his 29 points in the fourth quarter and made seven 3-pointers to help the Sacramento Kings beat the San Antonio Spurs, 121-114, on Sunday (Monday, Manila time).

Tyrese Haliburton added 27 points and matched his career high with 11 assists, Damian Jones scored a career-high 23 points, and Harrison Barnes had 14 points and seven rebounds. The Kings won for the second time in six games.

"Buddy was big," said Kings assistant coach Doug Christie, who is filling in while interim coach Alvin Gentry is in the NBA's health and safety protocol. "That's what I truly expect. Buddy shoots the ball at such an incredible level. Every time he shoots it, for me, it seems like it's going in and tonight it did."

Hield had only five points before making back-to-back 3s late in the third quarter. He opened the fourth quarter with a mid-range jumper and scored on a pair of driving layups, then made four 3s over the final five minutes.

Hield had 24 points over the final 15 minutes — more than he has scored in all but three games this season.

"He can shoot the cover off the ball," Haliburton said. "It helps when he's making shots for us. He was big down the stretch."

Dejounte Murray had 25 points, nine assists and seven rebounds for San Antonio. The Spurs, coming off a 128-126 victory at Utah on Friday night, outrebounded the Kings but were outscored 27-11 in second-chance points.

"Just started the game too casually," Spurs coach Gregg Popovich said. "I'm don't know if they took it for granted. I don't know if they're still excited about the Utah win. Who knows? But that was a disappointing loss."

The Kings fell behind early before Hield and Haliburton made consecutive 3s and Barnes converted a three-point play. Barnes later connected on a corner 3 to make it 37-27.

San Antonio got within six late in the second quarter but struggled to contain Haliburton, who has taken over at point guard for Sacramento while De'Aaron Fox is in the NBA's health and safety protocol.

Haliburton had a double-double by halftime and shot 12 of 19 overall. 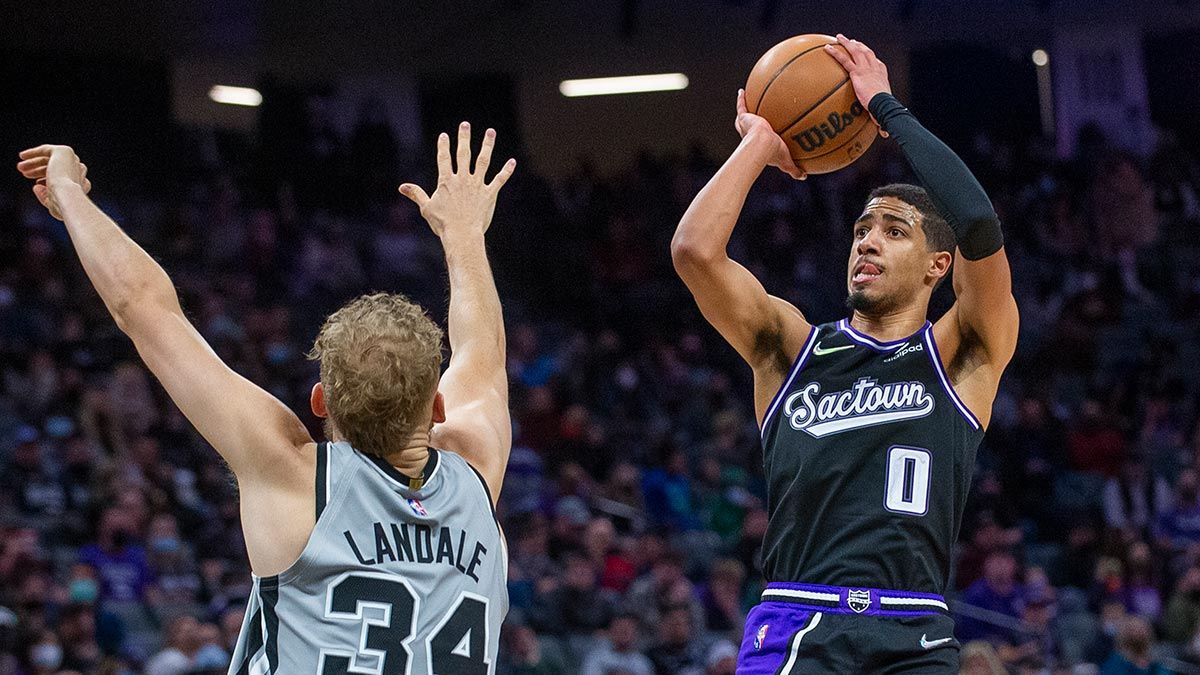 Moe Harkless appeared to get angry at Hield during a timeout in the first half. At one point Harkless waved his arms and stood outside of the team huddle while speaking with an assistant. Christie, seated in the middle of the huddle, tried to grab Harkless, who then walked to the end of the bench and sat down.

"For me that's good, you care," Christie said. "'Do you got a pulse? Show me that this is what you want.' On top of it we constantly ask for communication. They're communicating. How they're communicating, I'll leave that to everybody else to judge. The fact that they work it out together and then we keep it moving, I'm so here for that. If you hold it in, what happens then?"

Spurs: Doug McDermott was held out because of a toothache.