PHOENIX — The Phoenix Suns had designs on coming home with a chance to win their first championship.

Now an NBA Finals that seemed very much in the Suns' control when they left Phoenix a week ago returns to Arizona as a tossup.

The Milwaukee Bucks have taken the last two games to even things up, with Game Five set for Saturday night (Sunday, Manila time).

"It's two teams left in the league now playing for an NBA championship on the biggest stage," Bucks forward Bobby Portis said. "It doesn't get any better than that."

The Suns never got more than two victories in their two previous NBA Finals appearances, but they were only a few minutes away Wednesday in Game Four. Phoenix was ahead by nine points early in the fourth quarter and was still in the lead with 2 1/2 minutes to play.

But Middleton had 10 straight Milwaukee points down the stretch to finish with 40 and Antetokoumpo blocked Deandre Ayton at the rim after a lob pass to preserve the lead as the Bucks pulled out a 109-103 victory.

"Obviously that's a tough, emotional loss for us, but we move on to the next one," Suns All-Star Devin Booker said. "Next-game mentality for us."

The Bucks overcame a 2-0 deficit in the second round against Brooklyn and now are trying to become the fifth club to do it in the NBA Finals. That last happened five years ago when Cleveland rallied past Golden State.

First, the Bucks have to show they can compete in Phoenix. The Suns won both their home games by double digits.

But Milwaukee did a much better job in the next two games making sure it didn't let both of the Suns' star guards get going at the same time. The Bucks forced Booker into a 3-for-14 night in Game 3 and when he bounced back big with 42 points in Game 4, Chris Paul had as many turnovers (5) as baskets while scoring just 10 points.

"Now we are coming back home. We've got to protect home court," Paul said.

"I hate it, but it's that simple. We didn't sweep but one series, so this is what happens in a series. That's why they make it seven games. This is the finals. It's dramatic. We got to protect home court and win the game tomorrow."

Paul is in the NBA Finals for the first time in his 16th season and started with 32 and 23 points in the first two games. He has tailed off since but said he feels fine after revealing he was playing with torn ligaments in his right hand during the Western Conference finals.

"We know what's in front of us," Suns coach Monty Williams said. "You know Chris Paul, I mean, everybody in here has seen him. There's not a person in our locker room that's not expecting him to not come out and play really well the next game." 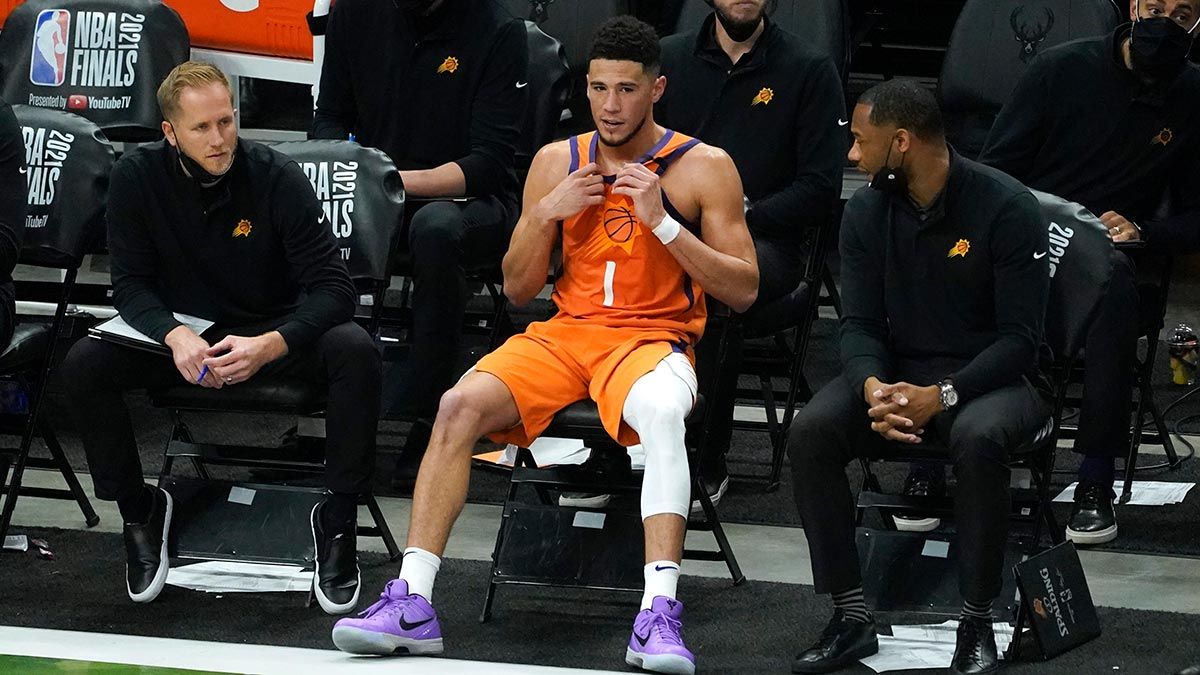 Devin Booker and the Suns try to stop the bleeding

The Bucks aren't concerned about their biggest star. Antetokounmpo seems far beyond the hyperextended left knee that forced him to miss their final two victories in the Eastern Conference finals.

After consecutive 40-point performances in Games Two and Three, he ceded the leading scorer role to Middleton but still came up with 26 points, 14 rebounds and eight assists.

No matter what happens the rest of the series, he has secured a spot in NBA Finals highlight reels for years to come with his block. It's already been replayed countless times in the two days since, but Antetokounmpo said he hadn't watched it again himself until the Bucks' film session Friday.

The Bucks are in search of a second championship to add to the one Kareem Abdul-Jabbar and Oscar Robertson led them to 50 years ago. They could do it at home in Game Six on Tuesday — provided they can finally break through on the Suns' home floor.

"It's going to be a battle," Bucks guard Jrue Holiday said. "But I think both sides know the price and both have a goal. You've just got to leave it out there."