Devin Booker No. 5 among guards? Suns coach says it's laughable

SALT LAKE CITY — When Chris Paul joined Devin Booker on the Phoenix Suns after a trade last season, it wasn't always easy to decide who would be the finisher when games got tight.

These days, it's just intuitive. Such as Wednesday night (Thursday, Manila time), when Booker fueled the Suns through three quarters and Paul sealed the deal.

Booker had 43 points and tied a career high with 12 rebounds, Paul scored 15 of his 21 points in the fourth quarter and the Suns extended their winning streak to eight with a 105-97 victory over the Utah Jazz.

"It's a good feeling now, but it came with a learning curve," Booker said. "There was a lot of trial and error, but now we've been in enough situations where we know what to expect."

Booker paced the Suns through three quarters, but didn't get a shot in the fourth until he missed a runner with 3:45 to play. Paul took over the offensive burden with his mid-range jumpers and drives to the basket.

"You only build that trust by playing together in games, close games like that," Paul said.

The most recent release for NBA All-Star voting tabulations showed Booker fifth among guards in the Western Conference. His coach thinks that is a joke.

"So many guys are getting so many more votes than him — it's laughable," Williams said. "When you look at what he's done not just lately but all season long and the wins we have, you know he should be a starter on the All-Star team. Tonight was one of those games where I think he proved that point."

Booker, who heard chants of "M-V-P!" from the Utah crowd at times, says he's not worried about votes anymore.

"I'm in a different phase of my career now ... and I'll let the politics and media popularity contest figure itself out," Booker said.

The starters are scheduled to be announced Thursday. 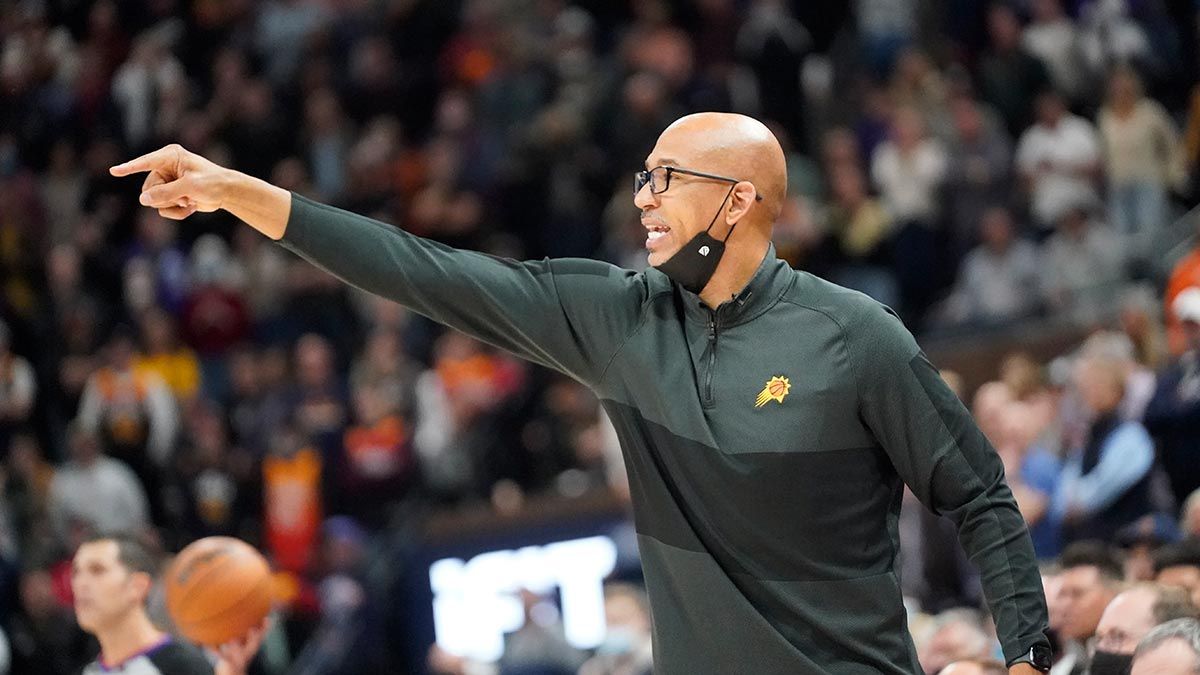 The Jazz trailed 98-94 when Hassan Whiteside committed an offensive foul and a technical. Booker made two technicals around a jumper that beat the shot clock to give the Suns the cushion they needed.

Playing without Donovan Mitchell (concussion) and Rudy Gobert (left calf strain), the Jazz got a boost from Jordan Clarkson, who scored 16 of his team-high 26 points in the fourth quarter. Whiteside had 16 points and 11 rebounds, and Mike Conley also scored 16 points and added 10 assists for the Jazz, who dropped their ninth game in the last 11.

"We're playing without Rudy and Donovan right now. But it doesn't mean we can't run back. ... This is about committing to the things consistently that allow you to (grow)," Utah coach Quin Snyder said of his team's inconsistent effort.

The Suns were also missing two starters in Jae Crowder (wrist) and Deandre Ayton (ankle), but Bismack Biyombo had 12 points in his first start of the season.

He said it was just "a gut feeling" to decide on Phoenix when he had suitors trying to bring him back to the NBA, but playing with Paul and Booker made his choice easy.

"They're good at closing games. ... Believers have wills, not wishes. Those guys have wills," Biyombo said.

Early on, the Suns simply outhustled and outran the Jazz, turning turnovers and missed shots into easy points in transition. Booker, with 21 points, outscored the Jazz by himself in the first quarter and the Suns blocked five shots on their way to a 39-18 lead after one period.

"Chris can read the game and when Book has it going like that, he typically goes to sets where he can get him in catch-shoot environments," Phoenix coach Monty Williams said. "But when he's in a groove like that, I think our team feeds off it."

Booker had 26 points in the first half — a season high for the Suns — but they collectively went 5 for 17 in the second period.

It took 35 field goal attempts on Monday to score 33 points, but he was far more efficient this time around, going 16 for 28 and adding nine free throws. Booker became the Suns' career leader in games scoring 40 or more points with 16.

"I don't take these moments for granted," Booker said. "Coming into a tough Utah building and it being rowdy here and us only having nine men and still coming up with a win — that's why you see a smile on our faces."

"We're just trying to find our way. Regardless of the losses, I think we're heading in the right direction as far as staying connected," Conley said, despite Utah's worst stretch of the season.

The same teams played a tight one Monday with Phoenix prevailing over an extremely short-handed Jazz team, 115-109. Conley, Ingles, Bojan Bogdanovic and Royce O'Neale sat out in Phoenix, but returned for Wednesday's rematch.

Suns: JaVale McGee (knee), Frank Kaminski III (knee) and Cameron Payne (wrist) were other primary Phoenix contributors out with injury. ... Booker got a technical foul in the second quarter. ... The Suns outscored the Jazz 22-3 on fast-break points and scored 22 points off Utah's 14 turnovers.

Jazz: Bogdanovic, frustrated with a scoreless first quarter with a pair of turnovers, threw the splint that was protecting his left ring finger avulsion fracture but had it on again when he returned in the second quarter. ... Trent Forrest turned his ankle after making a twisting baseline jumper in the fourth quarter. ... The Jazz only led once in the game by two points.