Booed at MSG, Trae Young has the word against Knicks

NEW YORK — Trae Young got a pregame hug from Spike Lee, so there was at least a little love for him inside Madison Square Garden.

Once the game started, so did the boos.

And just like the playoffs, it was Young who had the last word.

Young had 45 points and eight assists in his first game at MSG since becoming a villain to New York Knicks fans, leading a late surge that gave the Atlanta Hawks a 117-111 victory on Tuesday night (Wednesday, Manila time).

Picking up right where he left off last spring, Young made seven 3-pointers, including one that tied the game at 105 with 2:54 to play. He then set up Bogdan Bogdanovic for a go-ahead 3 and followed another by De'Andre Hunter by leaving Taj Gibson behind off the dribble and knocking down a jumper to cap an 11-0 spurt and make it 113-105 with 1:04 left.

"I think the swag and what we were able to do on the court tonight and the energy we had in the huddle, I knew it was just us versus everybody tonight," Young said. "And I think if we have that type of mindset each and every game, we're going to give ourselves a chance to win."

Bogdanovic added a season-high 32 points for the Hawks, who dropped the Knicks six games behind them for 10th place in the Eastern Conference, the final spot in the play-in field.

RJ Barrett had 30 points and 13 rebounds for the Knicks, who fell to 30-42 to clinch their eighth losing season in the last nine. The only winning record was when they went 41-31 last season to earn the No. 4 seed in the East.

The Hawks then beat them in five games in the first round of the playoffs. Young was the star in his first postseason series, ignoring the profane taunts from fans and bowing to the crowd from near midcourt late in Game 5.

Young missed the return trip when he was sidelined for the Christmas game because of the NBA's health and safety protocols. Fans booed him every time he touched the ball early Tuesday, though that didn't last.

"We knew that the crowd was going to have that energy similar to the playoffs and our focus was on us to play good basketball tonight, and we didn't talk about New York or the playoff series," Hawks coach Nate McMillan said. "We needed to win this game. It's a much-needed win for us and that was the focus."

Young said Lee, the film director and perhaps the Knicks' best-known fan, always shows him respect. And did the other fans sitting in the front row speak so kindly?

"Oh yeah, they always do, don't they?" Young joked.

Alec Burks had 21 points for the Knicks, who played without Julius Randle because of a sore right quadriceps tendon. They led by 10 early in the fourth, but the game changed when Young re-entered with 7:45 remaining.

The Knicks led 34-30 after one, a lead that would have been six if not for Bogdanovic taking the ball out after Barrett's basket with 0.6 seconds left and flinging it the length of the court to Young, who caught and tossed it in all in one motion.

"It was cool, it was good momentum," Bogdanovic said, adding he surprised himself a little.

New York extended it to 12 in the second before the Hawks surged ahead by nine and took a 64-58 lead into halftime. Bogdanovic had 15 points and Young 13 in the second quarter, combining for four more points than the Knicks scored. 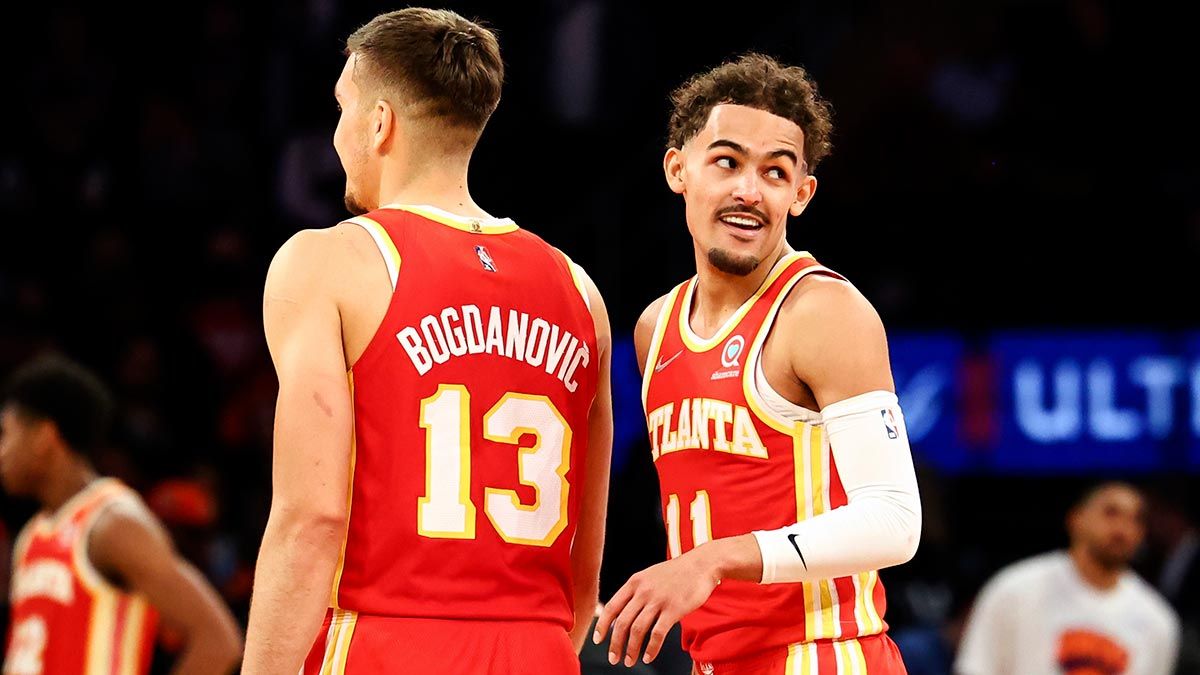 Trae Young and the Hawks are running 10th in the Eastern Conference.

Hawks: Bogdanovic was questionable to play because of a bruised right quadriceps. ... Though they won the four that mattered most last spring, the Hawks had lost six straight regular-season matchups with the Knicks.

Knicks: Thibodeau said Randle has been dealing with soreness that hasn't gone away and that rest was probably the only thing that would help. He said the forward was day-to-day. ... Thibodeau said Derrick Rose, recovering from a procedure to address a skin infection on his surgically repaired right ankle, was doing a little bit more work but still not practicing yet. ... Immanuel Quickley scored 17 points.

Randle was fined $40,000 by the NBA for directing hostile language at a referee after the Knicks' loss to Utah on Sunday, when he also shoved Jazz center Rudy Gobert. Randle has been fined four times for a total of $130,000 this season.

"You're human, there's going to be emotions involved in it," Thibodeau said regarding Randle's outbursts, "but we have to make sure we're controlling our emotions."

The Knicks hosted HBCU Night, which included Howard University's Air Force ROTC taking part in the pregame festivities and the Delaware State marching band performing at halftime. The NBA and National Basketball Players Association, led by past president Chris Paul, have made supporting the schools a priority.