BECKY Hammon was ready to lead her own team. So she went back to where her professional career began — the WNBA.

Hammon, an assistant with the San Antonio Spurs, will take over as the Las Vegas Aces' head coach and general manager after the NBA season concludes.

"Being the head coach of the Las Vegas Aces is a step forward and a step in the right direction for myself and for women's basketball," Hammon said. "I cannot emphasize enough the importance of this opportunity that I have. There's something to being a head coach."

Hammon has spent eight seasons as a Spurs assistant and has interviewed for several NBA head coaching jobs. But for now, her dream of becoming the first woman to lead an NBA team is on hold.

"I sat in head coaching interviews (in the NBA) and people said two things: 'You've only been in San Antonio and you've never been a head coach,'" she said. "NBA jobs are hard to get. In some ways, I feel like the NBA maybe is close. In other ways, I feel like they're a long ways off from hiring (a woman head coach). I don't know when it could happen." 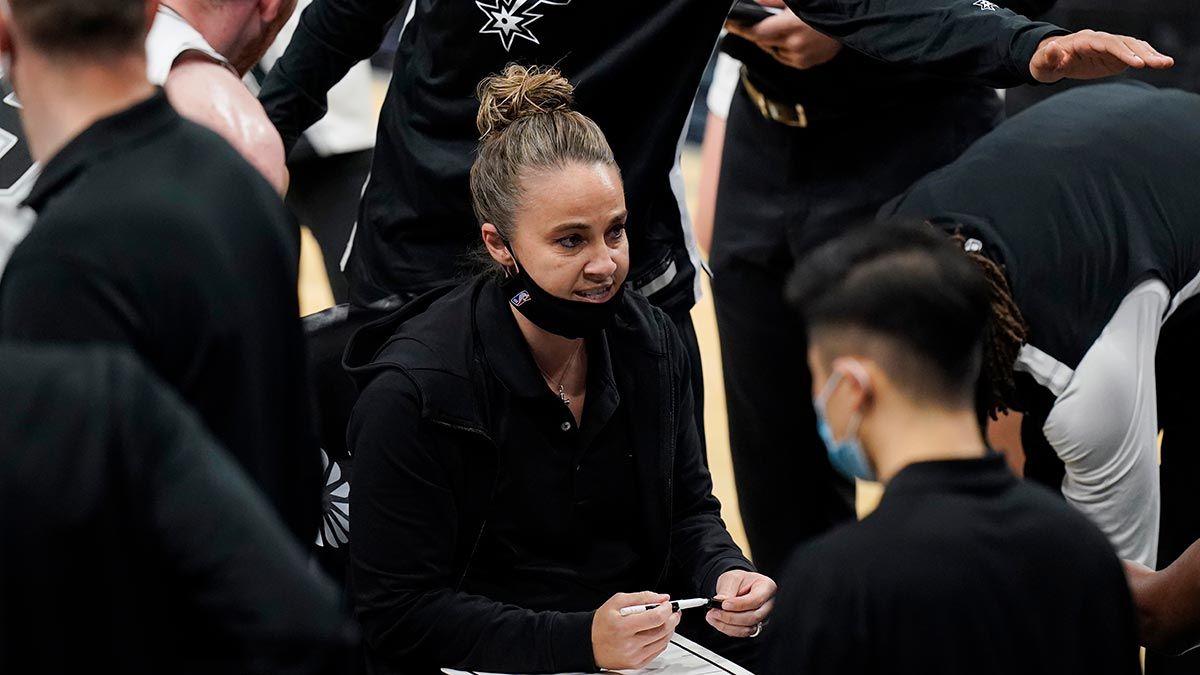 There are still a half dozen women assistant coaches in the NBA. Hammon's resume earned her plenty of respect: She will be the WNBA's highest-paid coach.

Hammon will replace Bill Laimbeer, who has been with the team since it moved to Las Vegas in 2017 and led the Aces on deep playoff runs the past three seasons, including a WNBA Finals appearance in 2020. Last season, the 64-year-old coach took a step back, letting assistant Tanisha Wright run more practices and in-game huddles. Wright left in the offseason to be the head coach of the Atlanta Dream.

"This is the organization that made it very, very obvious they wanted me really, really bad," the 44-year-old Hammon said.

The Aces finished with the second-best record in the WNBA last season at 24-8 before falling to the Phoenix Mercury in the semifinals. The franchise, looking for its first WNBA title, has a solid core led by former MVP A'ja Wilson.

"We have some really good pieces in place, so it's about adding new pieces that will fit my style of play," Hammon said. "We'll probably shoot a few more 3s to be honest, run up and down a bit more. The type of player I really want is a competitive one."

Hammon played in the WNBA from 1999-2014. The six-time All-Star began her career with the New York Liberty, who also interviewed her for their coaching vacancy earlier this month. She finished with the San Antonio Stars, who later became the Aces.

Las Vegas retired her jersey this season and she spent a little bit of time with the team, including working with Kelsey Plum.

"We're very excited to have Becky return to the Aces' franchise as our head coach," team president Nikki Fargas said. "Her success in the sport of basketball as both a player and a coach is unparalleled, and fueled by a tenacious desire to be the best she can possibly be. We have one of the most talented rosters in the WNBA, and Becky is the absolute best person to lead this team."