Edwards stars in Wolves rout of Rockets as Green struggles

MINNEAPOLIS — Anthony Edwards energized the first full-size home crowd of his nascent career with 29 points in 31 minutes for the Minnesota Timberwolves, who cruised to a 124-106 victory over the Houston Rockets to start the NBA season on Wednesday (Thursday, Manila time).

Karl-Anthony Towns led the way with 30 points and 10 rebounds, D'Angelo Russell added 22 points and seven assists, and the Timberwolves were in control from start to finish.

Christian Wood had 16 points and nine rebounds and Eric Gordon added 15 points off the bench for the rebuilding and overmatched Rockets.

According to the Elias Sports Bureau, this was the third time in franchise history the Timberwolves had three 20-plus-point scorers on opening night. The star trio went right to work, putting up 26 of Minnesota's 32 points in the first quarter.

Towns did his usual damage inside and outside, including 12 points during a 32-14 Timberwolves run to close the first half. Edwards had the crowd buzzing every time he touched the ball, and the arena went wild when he hit his fourth 3-pointer of the second quarter for a 72-43 lead. The first overall pick in the 2020 draft yelled in celebration and made multiple mocking timeout signals toward the Houston bench, daring them to try to stop his hot streak.

Edwards came on strong down the stretch of his rookie season, but due to the pandemic there were hardly any people at Target Center to watch him. He clearly thrived in the atmosphere, offering a highlight reel of swishes and dunks to start his second year in the NBA.

Incoming Timberwolves owner Marc Lore, who's partnering with Alex Rodriguez to buy the club from Glen Taylor, sat courtside in a blue mask and a gray hat and had a blast watching the action. The Timberwolves went 15 for 36 from 3-point range and, more important, played the kind of intense defense that has been badly missing for several seasons. 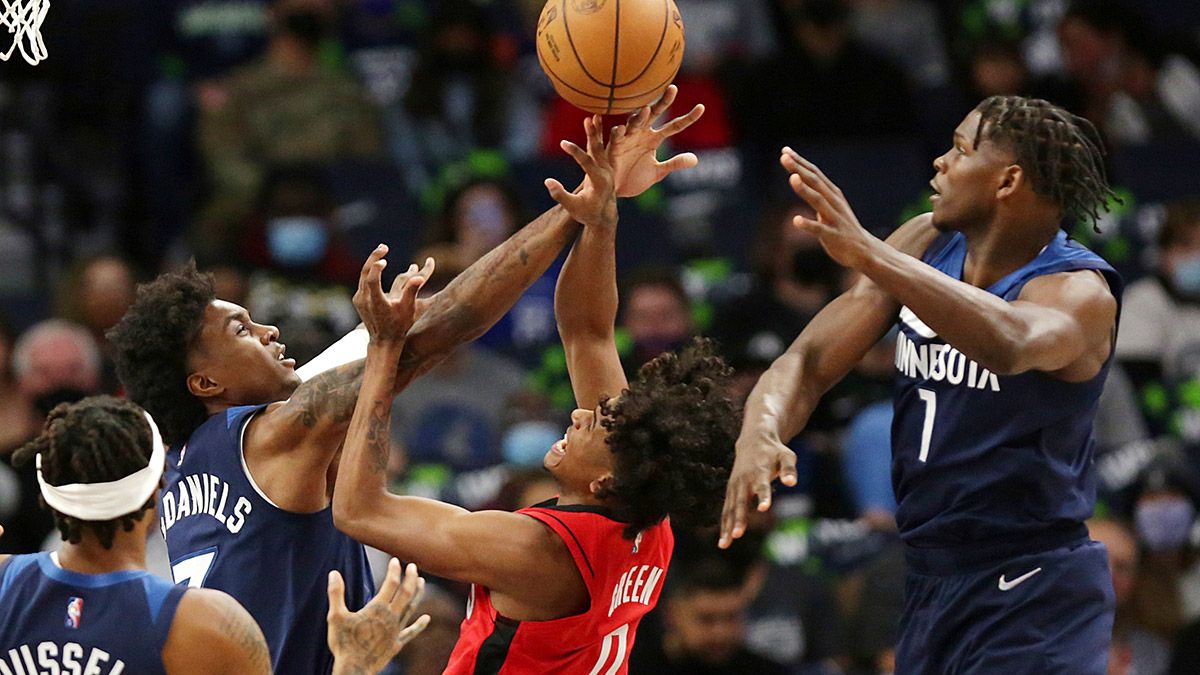 Second pick Jalen Green shoots 4 for 14, including 1 for 6 from eyond the arc.

Second-year coach Stephen Silas has his hands full with these exceptionally young Rockets, who fell behind by a game-high 35 points early in the fourth quarter. Daniel Theis, Kevin Porter Jr. and Alperen Sengun each had 11 points.

The last 20-point trio for the Timberwolves in an opener was Jimmy Butler, Jeff Teague and Andrew Wiggins on Oct. 17, 2018. On Oct. 31, 1997, they had four players reach that mark: Chris Carr, Kevin Garnett, Tom Gugliotta and Cherokee Parks.

Timberwolves: Patrick Beverley served his one-game suspension for shoving Chris Paul during a timeout in Game 6 of the Western Conference finals, while he was with the Los Angeles Clippers. ... With Beverley out, Jordan McLaughlin backed up Russell at point guard. McLaughlin (groin strain) was a game-time decision. ... Josh Okogie started at small forward. He had 37 starts last season.

Rockets: Play their home opener against Oklahoma City on Friday.