CHICAGO — Grayson Allen once again responded to the boos from the fans and even his teammates by making shot after shot.

By the time he was finished, he had his highest point total in a postseason game. And the Milwaukee Bucks walked away with another lopsided win.

Allen set playoff career highs with 27 points and six 3-pointers, Giannis Antetokounmpo had 32 points and 17 rebounds and Milwaukee beat the Chicago Bulls, 119-95 on Sunday (Monday, Manila time) to take a 3-1 lead in their first-round series.

Jrue Holiday scored 26, and the defending champion Bucks came away with another easy win after two shaky performances at home.

They've outscored the Bulls by a combined 54 points over the past two games. That includes a 111-81 romp on Friday that was the most lopsided home playoff loss in franchise history.

The Bucks led by 22 early in the third quarter and steadied themselves after a push by Chicago. The defending NBA champions will try to wrap up the series in Milwaukee on Wednesday night.

Allen delivered another huge effort off the bench, surpassing his previous postseason scoring high of 22 points in Game 3. He made 10 of 12 shots and hit 6 of 7 3s, getting booed once again just about the entire time.

Allen, in his first season in Milwaukee, has a bad-boy image from his time at Duke. He is particularly unpopular in Chicago, where fans are upset about a hard foul that resulted in a broken wrist for Bulls guard Alex Caruso during a game in Milwaukee in January.

Teammates have since started having fun with the boos, letting him hear it at practices and film sessions, on the bus and at the hotel. And now, they're doing it in games, too.

"They have so much fun," Allen said, laughing. "I think it's funny. I think it's honestly hilarious. They've kind of turned it into a fun thing. It makes hearing it out there during the game a lot easier, too, because they think it's so funny."

Allen is 18 of 24 from the field and 11 for 14 on 3-pointers over the past two games. With Khris Middleton expected to miss the remainder of the series after spraining his left knee in Game 2, the Bucks needed it.

"He's played well here in Chicago," coach Mike Budenholzer said. "I think some of it's his best basketball. I think it's just the competitor in him, the fight in him. It's always there, but maybe it's a little heightened when we're here."

Bobby Portis added 14 points and 10 rebounds in his second straight start with Middleton out, and the Bucks beat the Bulls for the 19th time in 21 games.

"There were times where we gave really, really good effort and they still scored," Bulls coach Billy Donovan said. "I think there were times we moved the ball and generated pretty good looks for each other and the ball didn't go in the basket. That, I think, gets deflating. And you could kind of sense that a little bit." 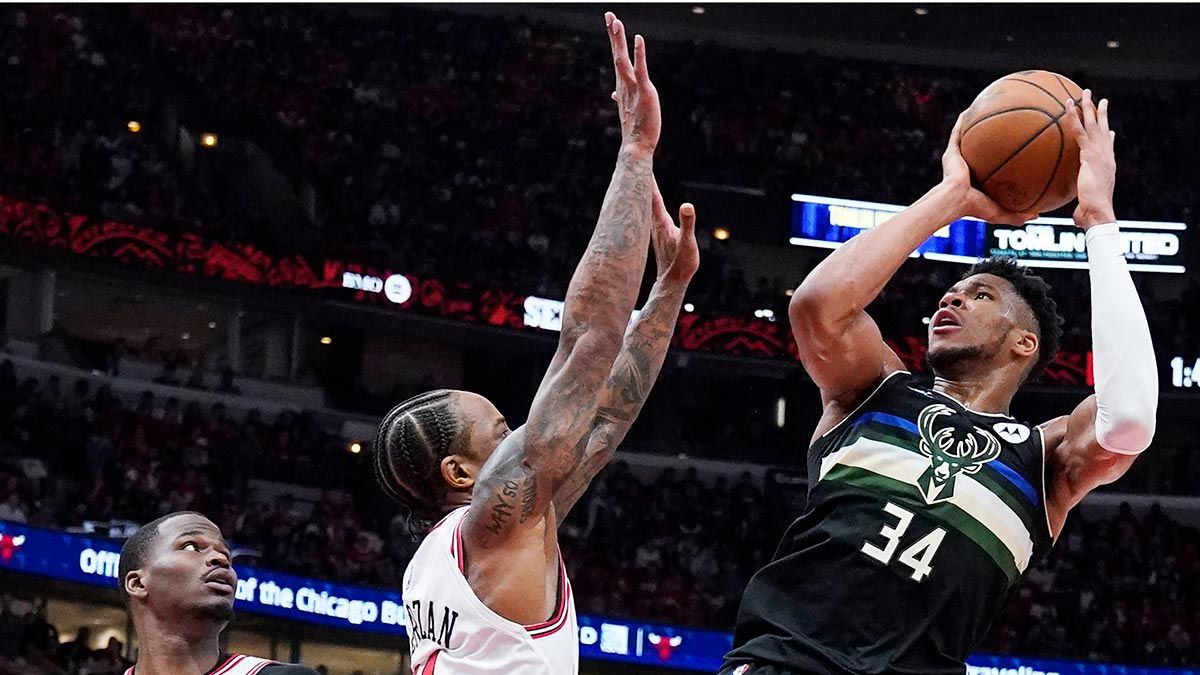 Giannis Antetokounmpo and the Bucks are a win away from the conference semifinals.

Bucks: Portis and LaVine had to be separated in the closing minutes after they got tangled and had a heated exchange near the Bulls' basketball. Portis wore goggles again to protect his right eye. Portis suffered an abrasion in Game 2 when he was hit by Chicago's Tristan Thompson as they went for a rebound. ... G George Hill (abdominal strain) missed his fifth game in a row. ... G Luca Vildoza was unavailable because of a non-COVID illness. The 26-year-old Argentinean played eight minutes in Game 3 in his NBA debut, after signing with the Bucks on April 6.

Bulls: Caruso was being evaluated for a concussion after exiting the game late in the first half with a bleeding nose. Milwaukee's Jevon Carter inadvertently hit Caruso in the face as Caruso tried to get around a pick by Antetokounmpo. ... Chicago has lost six straight home playoff games since beating Cleveland in Game 3 of the 2015 Eastern Conference semifinals. Chicago dropped that series in six games. ... Assistant coach Maurice Cheeks was back after missing Game 3 with a non-COVID-19 illness.