SAN FRANCISCO — Andrew Wiggins hoisted his daughter Amyah into his arms and beamed as the Warriors were crowned Western Conference champions.

Stephen Curry and Draymond Green each had hardware in their hands or they most certainly would have lifted Wiggins into the air to celebrate all he has meant to Golden State's latest postseason run.

He defended Luka Doncic full-court. He drove and dunked on Doncic with an emphatic in-your-face one-handed slam. He is knocking down big shots and securing rebounds at the right times.

"Just living in the moment, just taking it all in, winning," Wiggins said. "... Just winning with this team, with these guys has been the most important thing."

From the moment Wiggins began hearing rumblings of a possible trade to the Warriors from Minnesota ahead of the deadline in February 2020, he allowed himself to imagine the possibility of winning it all with Curry, Green and Klay Thompson. He pictured playing for coach Steve Kerr.

Now, he's about to be on the NBA Finals stage with a chance to do it.

Game One against the Boston Celtics is on Thursday night at Chase Center, where Golden State is 9-0 this postseason and Wiggins again will be tasked with a tough defensive matchup, this time to slow down Jayson Tatum.

"I love playing defense, I think I'm good at it," Wiggins said. "I love taking on the challenge."

For all those months after being traded when Wiggins faced questions about how he would fit with the Warriors, he has shown he is right where he belongs — and in the finals for the first time in his eight-year career.

The Warriors were in need of an athletic wing and found that player in the 6-foot-7 Wiggins, who once he arrived no longer had to be the face of a franchise or carry that weight on his shoulders as he did with the Timberwolves.

"From the time the trade happened to now, this was the vision of him playing a very, very important role and having the opportunity to do it under the brightest lights and biggest stages like the playoff run like we've had and now the finals," Curry said. "Excited to see that continue." 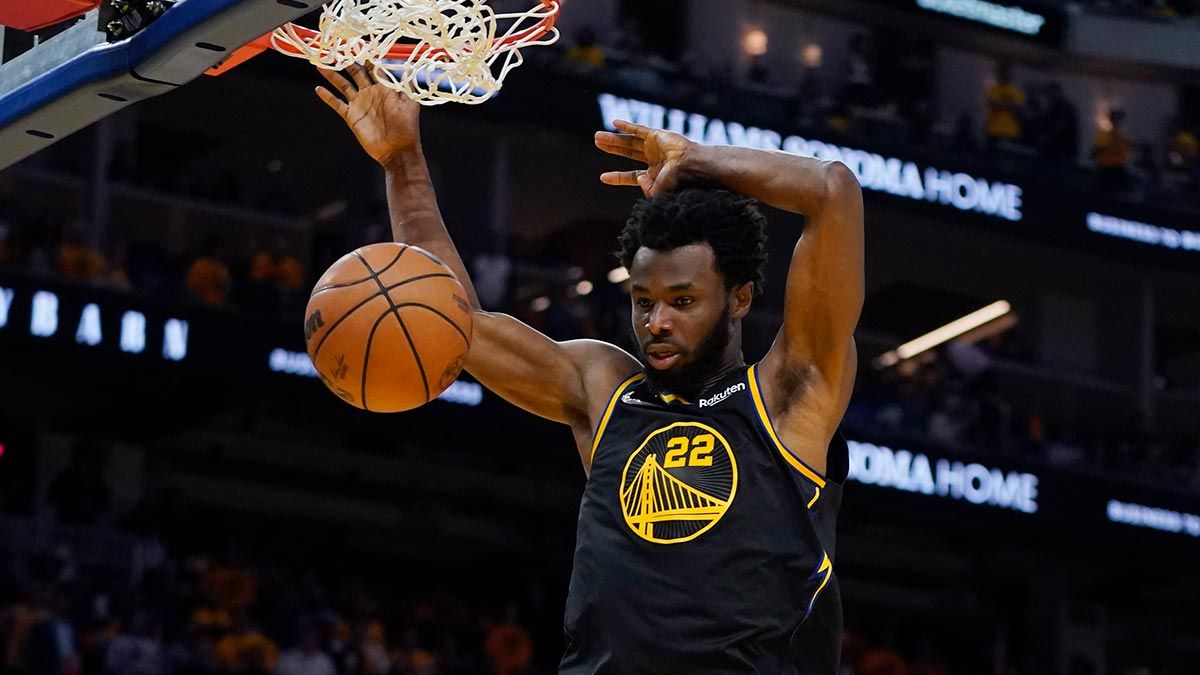 Wiggins has been more than even Kerr imagined given his playmaking ability on both ends. For a team that routinely shoots 3-pointers, Wiggins has been one of the most reliable for Golden State inside the arc.

When Golden State needed continuity with Curry, Green and Thompson all sidelined for long stretches this season because of injuries, "Wiggins was a constant, he was here all year," owner Joe Lacob said of the 27-year-old Toronto native.

Once he joined the Warriors in 2020, Wiggins only played 12 games before the NBA season shut down because of the pandemic. Kerr saw plenty in that small sample size and believed Wiggins would shine in the Bay Area.

"I think all of last year really gave him a better chance to get a feel offensively and start to really fit in to our off-ball movement," Kerr said. "I think he's taken a leap in this postseason with his rebounding and his defense and I think continuity is so important in this league that you can't just throw people together and expect it to work. The previous year and (12) games two years ago and then this season, it's all led to this point. Wiggs has just been a perfect fit and we wouldn't be here without him, that's for sure."

Yet Wiggins briefly became a distraction before the season started when he said he would stick to his beliefs and not get vaccinated against COVID-19. He eventually opted to receive the vaccine, having faced the possibility of not being allowed into home games when the San Francisco Department of Public Health began requiring proof of vaccination for large indoor events.

That's a distant memory now given how Wiggins has performed.

Curry has only seen Wiggins' swagger grow as the stakes increase. This group has come a long way since its league-worst 15-50 showing during the pandemic-shortened 2019-20 season right after Wiggins arrived.

"It's a beautiful story," Wiggins said. "A lot of ups and downs."

It was his daughter who woke him from a nap in January to share the great news he was a first-time All-Star, and selected as a starter, too.

He's not satisfied just yet.

"I'm thankful," Wiggins said, "we still got more work to do."