LOS ANGELES — Anthony Davis scored 32 points, Russell Westbrook had his first triple-double with the Lakers and Carmelo Anthony had a season-high 29 points off the bench as Los Angeles defeated the Charlotte Hornets, 126-123, in overtime on Monday night (Tuesday, Manila time).

Westbrook notched his 185th career triple-double. Finishing with 17 points and 14 assists, six of his 12 rebounds came in the fourth quarter and overtime.

Davis, who also grabbed 12 rebounds, had six points in overtime, including a pair of free throws that gave Los Angeles a three-point lead with under a minute remaining.

Terry Rozier had a season-high 29 points for Charlotte, while Gordon Hayward added 21 and Miles Bridges had 19. The Hornets' fifth straight loss put a damper on LaMelo Ball's second career triple-double, as the Chino Hills, California, native had 25 points, 15 rebounds and 11 assists.

Charlotte had a chance to send it to a second overtime, but Davis partially blocked Terry Rozier's jumper from the corner, and Cody Martin missed a 3-pointer after Bridges got an offensive rebound.

It's the Lakers' first victory in the four games that LeBron James has missed this season; Monday was his third straight sitting due to an abdominal strain.

Monday's game was the first of the young season in which players on opposing teams had triple-doubles — it happened twice last season where, coincidentally, Westbrook was one of the players. 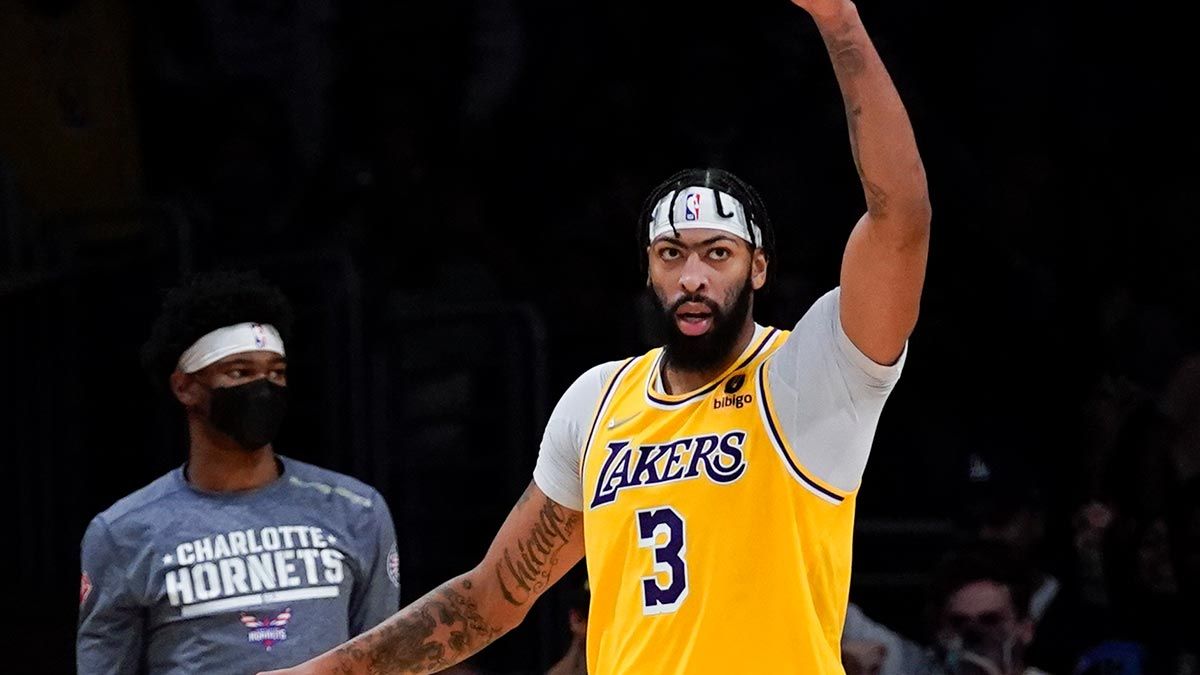 James did some light shooting Monday morning, but there still isn't a timeline for when he might return. James went to the seats opposite the Lakers' bench between the third and fourth quarters to talk to musical artist Bad Bunny, who was in attendance.

Los Angeles outscored Charlotte with 22-9 run over the last 3:48 of the third quarter to take a 94-87 lead. Malik Monk, who finished with 10 points, punctuated the run with a 3-pointer from midcourt at the buzzer.

The Lakers would score eight straight during one stretch early in the fourth quarter to go up by 14 (103-89) with 9:02 remaining before the Hornets rallied.

Hornets: F PJ Washington is out for at least the next three games due with a left elbow hyperextension he suffered during the Nov. 3 game against Golden State. He will be reevaluated early next week. ... All five Charlotte starters scored in double figures. Mason Plumlee was six of seven from the field, scoring 13 points and grabbing 10 rebounds before fouling out.

Lakers: Rajon Rondo was ejected with 10:55 remaining in the game due to a flagrant 2 foul while Rozier was driving to the basket. ... DeAndre Jordan scored all 10 of his points in the first six minutes, as well as as four rebounds. He finished with eight boards.