The Sixers, who were beaten twice by the Cavs earlier this season, went 4-2 on their trip as they wait for Embiid to get back from a knee injury. They were also able to stay on Brooklyn's heels for the No. 1 seed in the Eastern Conference.

Seth Curry made five 3-pointers and scored 19 points, and Milton's scoring off the bench helped offset an off night for Ben Simmons, who went just 2 of 11 from the floor but had 13 rebounds. Howard made 6 of 7 shots while matching his season-high.

Philadelphia's defense clamped down on Cleveland in the third quarter, holding the Cavs to 17 points. The Sixers then pulled away early in the fourth thanks to two 3-pointers from Milton, who went 5 of 7 beyond the arc. 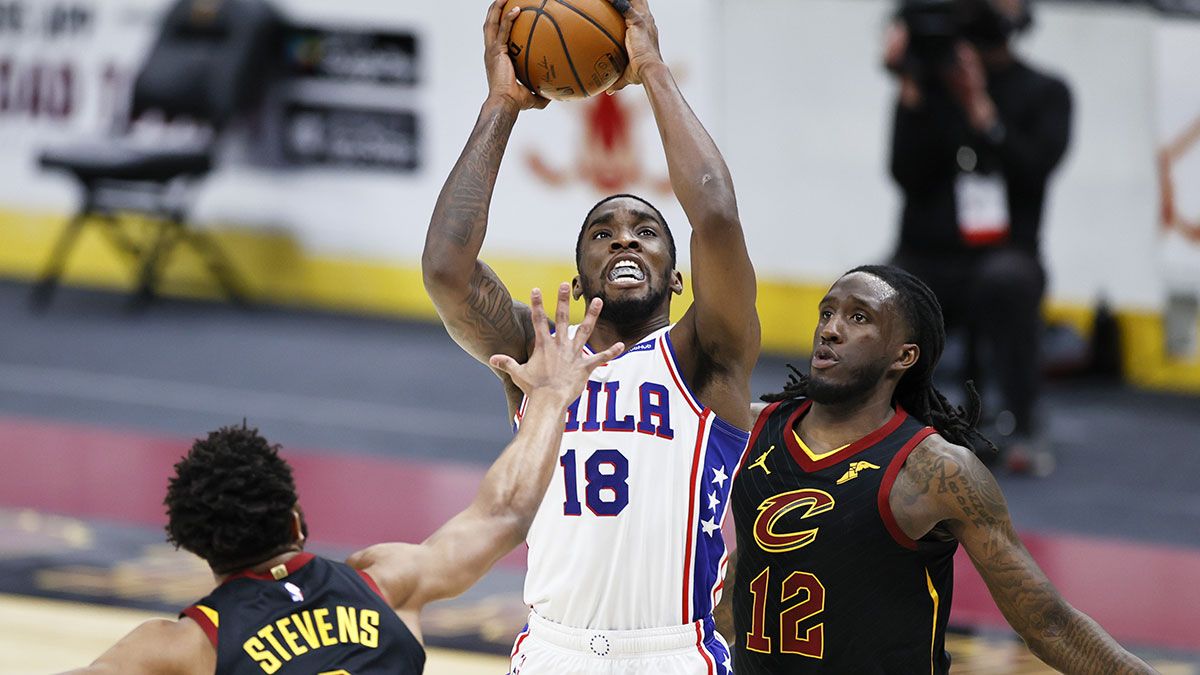 Shake Milton rises for a shot over Taurean Prince and Lamar Stevens.

Collin Sexton scored 24 points to lead the Cavs, who welcomed back forward Kevin Love. The five-time All-Star played in just his fifth game this season because of a calf strain and finished with 13 points in 20 minutes — only five after halftime.

Matthew Dellavedova made his season debut for Cleveland after being out with a concussion and appendectomy. The crowd favorite didn't score but had five assists in 16 minutes.

Embiid missed his 10th straight game with a bone bruise in his left knee, an injury he sustained dunking on March 12.

He's close to returning — Saturday's game against Minnesota seems likely — and the Sixers are expected to provide a medical update Friday on their talented big man, who was one of the MVP frontrunners before he got hurt.

While they missed him, the Sixers also figured out some things without Embiid as Philly's reserves were forced to play a larger role.

After getting a warm ovation, Love made his first three shots, two of them 3-pointers, and scored 10 points in the first quarter. He was on a minutes restriction, but Bickerstaff inserted him back in the game in the second quarter when it appeared the 32-year-old was still catching his breath.

76ers: Improved to 7-3 without Embiid. ... Coach Doc Rivers will do his best to balance rest and health down the stretch but made it clear Philadelphia will "want to get" the East's top seed. ... One of the game's most revered coaches, Rivers has enjoyed being a mentor to younger coaches across the league. He also loves to pick their brains. "I'm tired of hearing the same old ideas," he cracked.

Cavaliers: Love and Dellavedova missed a combined 90 games, depriving the Cavs of experience and on-court leadership. ... Bickerstaff has talked to Darius Garland about being more of a vocal leader, which doesn't come naturally to the 21-year-old. "It's not in his nature," Bickerstaff said. "He's a leader by example mostly."... Garland is one of just six players in the Eastern Conference averaging at least 16 points, five assists and shooting better than 39% on 3-pointers and 83% from the line.

76ers: Return home and host the Timberwolves on Saturday.