Simmons kicked out of Sixers practice, suspended for one game

CAMDEN, N.J. — Ben Simmons doesn't want to play — or even practice — with the Philadelphia 76ers anymore. So coach Doc Rivers kicked out the All-Star guard and suspended him for the season opener.

Joel Embiid's take on the whole fiasco? Good riddance. Last season's NBA MVP runner-up put Simmons on blast: "At this point, I don't care about that man. He does whatever he wants."

Simmons refused to play as a full participant at Tuesday's practice (Wednesday, Manila time), a day after he lingered outside a team huddle and mostly stayed alone in a corner without talking to teammates.

Embiid dropped multiple references Tuesday to not working as babysitter anymore for the 25-year-old Australian guard, who still has four years and $147 million left on his max contract.

"I'm not here to babysit," Embiid said. "I'd be willing to babysit if someone wants to listen, but that's not my job. That's out of my control."

Simmons will not play Wednesday in New Orleans and it seems inconceivable he will suit up for Friday's home opener in front of 20,000 furious fans ready to boo him out of the Wells Fargo Center.

He has not talked publicly since his offseason trade request — his early exit from practice meant he skipped Tuesday's scheduled media availability — and there's no telling if he'll return to the Sixers.

Rivers remained diplomatic and said Simmons would be welcome to return to practice.

"I just thought he was a distraction today," Rivers said Tuesday after practice. "I didn't think he wanted to do what everybody else was doing. It was early. It wasn't a big deal. I just told him he should leave. We went on with practice."

Tyrese Maxey will likely start in Simmons' place. Simmons could refuse to return, though his surprise appearance last week was largely considered financially driven to try to stem lost money in fines and missed game checks.

Sixers President Daryl Morey and general manger Elton Brand, who was at Tuesday's practice, have yet to receive a trade offer worthy of the franchise dealing their three-time All-Star. Morey said at the start of training camp he wouldn't be forced into making a trade just for the sake of appeasing Simmons. 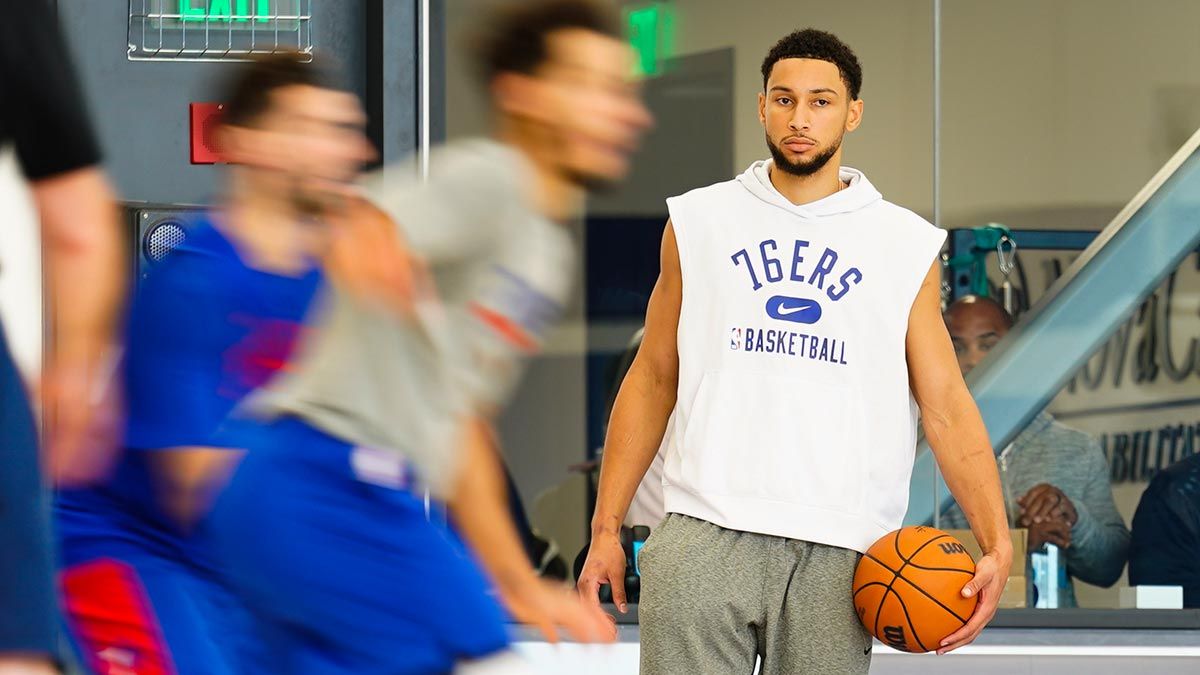 Without Ben Simmons, the Sixers face 20-1 odds to win the NBA championship.

The drama doesn't appear to have an immediate end.

Embiid, Philly's franchise player, said a bond as tight as it had ever been last season with Simmons is no more. Embiid said he hadn't talked to Simmons in the three days — well, 2¼ — they practiced.

"It is not my problem," Embiid said. "I get paid to deliver and that's to win games, and obviously, the ultimate goal is to win the championship. I can't do it alone."

Without Simmons, the Sixers face 20-1 odds to win the NBA championship, according to FanDuel Sportsbook. That's one reason why Rivers, at least publicly, wants to work toward a harmonious resolution with Simmons.

"He's a good player. He can help us," Rivers said. "The one thing I know about players: Our players will welcome anyone back who wants to be in. And players will not welcome anybody who does not want to be in."

Simmons averaged 15.9 points, 8.1 rebounds and 7.7 assists over four seasons with Philadelphia, which drafted him out of LSU, where he played only one season. His defining moment as a Sixer came when he passed up a wide-open dunk against Atlanta in the second round of last year's playoffs that would have tied the game late in Game Seven. Simmons took the blame for Philly's early postseason exit.

Embiid was among a small group of Sixers that tried to visit with Simmons in the offseason and talk sense into him, only to get rebuffed by the No. 1 pick of the 2016 draft.

Australian wine producer Penfolds said it was "proud of our partnership with Ben Simmons" and did not offer additional comment. Smartwater said "there are no current changes planned regarding our partnership" that it's had since 2019 with Simmons. Australian meat pie brand Four'n Twenty, which has a concession stand at the Wells Fargo Center, said Simmons remained a brand ambassador for the company. Nike, which signed Simmons to a guaranteed $20 million contract before his first NBA game, did not immediately respond to multiple attempts for comment.

Roughly three dozen media members and a row of TV cameras worthy of a playoff game showed up Tuesday at the Sixers' complex in New Jersey in hopes of a soundbite from Simmons. The team instead released a statement on the suspension before the end of practice. Just like that, he was gone.

Through the swirling drama, the Sixers insist they're ready to play.

"The year is going to be fun," Embiid said.