JASON WILLIAMS stole the show with his dazzling ball-handling skills as the Scottie Pippen-led US All-Stars beat a team of former PBA stars, 112-93, on Wednesday night in a highly-entertaining exhibition match at the SM Mall of Asia Arena.

Williams, the former Miami Heat star, had 26 points and seven assists for the US All-Stars including an alley-oop pass off the backboard to Pippen who finished the play with a two-hand slam in the final moments of the game.

Pippen, the former Chicago Bulls star and Hall of Famer, had 20 points while Mitch Richmond had 12 points for the visiting team made up mostly of NBA greats, who are in the country as part of their Asian tour.

Kenneth Duremdes led the PBA Legends with 29 points while Noli Locsin, Marlou Aquino and Bong Hawkins each had 11 points.

The result, though, was not as significant to Filipino fans who came to be entertained by some of the finest players to play in the American pro league.

Williams and Co. did not disappoint.

Pippen and the rest of the players had nothing but thanks to the Filipino fans who trooped to the venue.

“Thank you for coming out and supporting us,” said Pippen in front of the fans. “We tried to make the game fun and exciting. We thank you for being kind and I know that there are a lot of Chicago Bulls fans here, thank you for showing your support.”

The PBA Legends made it interesting as they kept the game close until back-to-back assists by Williams to Pippen and Horace Grant opened a 47-33 lead for the visitors in the second period.

The most memorable moment came during a television timeout with 16 seconds remaining in the game when Dennis Rodman acknowledged his father Philander, who was in the crowd to watch his son play.

Father and son have been estranged for a long time. 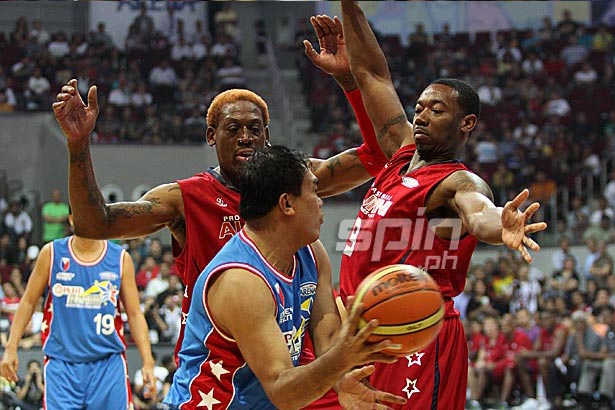